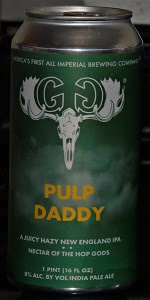 Had on tap. Pours hazy, yellow in color with 1/4 inch head. Taste is orange juice, pineapple, and tangerine. Medium heavy bodied, slightly bitter with moderate carbonation. Great first beer from the brewery. Nice and juicy. Would get this again.

was quite impressed with this one, having no real expectations going in. its a very pungent yet smooth and creamy IPA, definitely nails the haze juice style.

Poured into a tulip.
The appearance was a beautiful looking golden orange/yellow color with a small quickly falling off foamy white head. Sticky lace streams along the sides of the glass. And a small little white foamy sheet of a cap just sat in the middle. I must admit it was quite neat to watch as I sipped this down.
The aroma had a fairly big juicy citrusy sweet character colliding with some pineapple chunks. Then a clean biscuit malt flows in underneath.
The flavor leaned towards the juicy sweet side at first but developed a keener blend as it warmed. Very nice aftertaste of clean biscuits, pineapple chunks and citrusy sweet hops.
The mouthfeel was about medium bodied with a fair sipping quality about it. Nice low key carbonation as expected for the style. ABV felt appropriate. Juicy finish with citrus and pineapple throttling this one forward to be a fabulous Summer beer! Definitely would come back to.

I've been eying this 4 pack at my local beer store for the past month and I finally pulled the trigger yesterday. It's time to rip into this beer and get the weekend started.....

Pours a hazy and cloudy mustard yellowish color with a really nice white head that forms on top. Excellent trails of sticky lacings cling all over the glassware.

The nose is fragrant and inviting with whiffs of freshly chopped citrus fruit, think limes and oranges.

Big fruity profile up front that is reminiscent of a blend of tangerine, peach, grapefruit and mango. A tad yeasty with hints of dry chalk, finishing clean. My next sip provides a somewhat bitter, lingering bite with a touch of white pepper spice.

I'm down with this beer with its soft mouthfeel, tasty citrus profile and deceiving 8% ABV.

Orange and grapefruit rind in the aroma from the hops. Dense holden field grains, high toned citrus and lemmon zest. It's a sharp and sour kick to the nose. Sweet, malty, amber and honey soaked bread balances out the pungent hops well. Just a bit too much of the sour/fruity and or lemmon zesty effect. Seriously spicy, which might not vibe too well with the overwhelming juicy side.

This is an orange and tropical juice explosion of hops. Sharp and tangy citrus bite, sweet mango and kiwi, passion fruit and spring water rolls in all at once. Nice comolexity, the hop levels go pretty deep in waves of flavor. >

A juicy mouthfeel seems zippy and light. Juicy in middle, rolls on the palate pretty smooth to finish. >

The hops here combo up to make the flavor unique. Deep and really easy to dtink for a NEdipa. Juicy bomb city.

Quite a nice NE style IPA from a Massachusetts brewery that's new to me. Canned date 12/17/19. Pours a slightly yellow-orange color with some fluffy white head and some very scant spotty lingering lacing. Smells of ripe mango, papaya, grapefruit, pineapple, lemon and melon. Also some malt, caramel, vanilla and weaker floral and herbal hops. Taste follows the nose, great balance and good hit of hoppy bitterness at the finish. Slightly juicy. Smooth mild mouthfeel, good carbonation. Wish it were a little softer. Overall a good beer and had a well-hidden higher ABV.

Decided to give this a shot even though I've found this brewery to be quite lackluster. For the record, I have had
regular Pulp before once and found it to be just barely worthy of finishing the can. Purchased a single can dated 6/26/18.

Pours a deep hazy orange color with a nice, creamy-looking head of only a finger-and-a-half. Retention here is quite good, though, and I like the color and construction of the pour; solid lace as well... as soon as this tumbled out of the can and into my glass, I was initially a little underwhelmed cuz it didn't look AS hazy as they claim on the can, but when it's all there in one place it certainly looks the part. There is, however, a huge chunk of flocculant yeast at the bottom of my glass which I'm going to do my best to avoid drinking. Pretty gross looking element that definitely takes it down a notch for me.

The nose is chive-forward and citrusy by turns, with a focus on orange, grapefruit and tangerine as well as slight notes of papaya flesh and light resinous undertones. There are almost some slight tannic elements here, as well, as the beer warms. I think there's definitely some good stuff going on here but it overall feels more than a little muted. The yeast is definitely doing a lot of work, for better or worse, for instance, by bringing out estery elements that I think the brewery probably wants to work more explicitly with the hops on order than they actually do. I'm not totally sold on the nose here, but it's not really bad. I'm just really expecting more from the marketing these guys have going on their cans. "Inspired. Evolved. Imperial."? Really?

Flavor profile is full of sweaty tropical fruit that kind of plays it safe and anonymous, along with some citrusy flavors and a chewy malt backbone of biscuity graininess that undercuts the hops once again. That said, some nice flavors of orange and tangerine zest combine with papaya and guava notes in a fairly-palatable way. There's a little bit of an alcohol sting towards the finish, letting you know you're drinking a stronger IPA, but it's not harsh whatsoever. All this having been said, though, this just isn't JUICY. There's nothing that actually makes me feel like the hops are standing out above the crowd here, and it just kind of tastes bland and pedestrian overall.

The feel is nice and smooth, sure, but since the flavor profile isn't spectacular, it just isn't the best drinking experience in the style. I do like the lower carbonation and rather palate-coating oily aspect going on here, but the taste just isn't doing much for me. I really like this style of IPA in general, but this needs to be dialed in quite a bit to really achieve what I think they're going for.

The sweet, juicy aroma pops right out of the can upon opening. This IPA is super delicious and highly recommend for IPA lovers.

“Carini had a lumpy head”

Good sudsing, gentle hop bite on the finish, lingers in the mouth

Much better than the original.