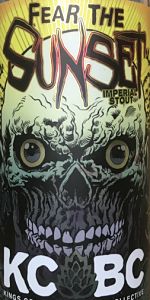 Charcoal black with a brown cap. Smells like a hazelnut latte, great melding of the aromas. Taste is right there too, get more out of the chocolate but otherwise hazelnut, vanilla, and coffee are meld into a delectable delight with coconut as the glue holding it together. The terrifying part is you cannot taste even a hint of the 16% abv! Certainly a big beer, malty, heavy and chewy while viscous, again amazed how well the abv is hidden. Very well done here! The wife liked it

Canned 3/9/20. I first must say that I am awed at Tavour's logistics. Cans went from Brooklyn to Seattle and then one to me in Chicago in three weeks. (The slowest movement was getting into Chicago, but that's a century-old logistics joke.)

Having this AIS is not unlike dinner for four in which no one admits to wanting dessert, so I order mine. The chocolate cake arrives with four forks. But quickly, my feelings get hurt as the last crumb disappears. Now if KCBC's creation were put on the table with four flight-sized glasses, my feelings would not get hurt because 4 ounces of this is enough to dull my feelings.

While Fear The Sunset doesn't Look above average (more suds would be nicer), the Smells are all there: the chocolate, the vanilla, the coconut, the Nutella. And they deliver in the Taste; albeit a bit sweet (but then, this is dessert... am I right?) And it sits in my mouth just fine, smooth, soft, like gooey chocolate. As for concealing the alcohol, done like a champ.

KCBC gets a brewer's review because I'm getting old and I may never come their way again. In reviewing their website, KCBC reminds me of what happens if Spiderman became a brewer with his buddies. That's all good. At 4 years old, they are making a go of it in a part of Brooklyn that had become too run-down for its own good, but is coming back. I got a soft spot for Brooklyn as both it and Chicago will forever be The Second City. (But we have two baseball teams and they still had their's stolen. Ouch!) And as I write, New York is the epicenter of this catastrophe of incompetence... and Chicago is not far behind. All that said, I give KCBC some pretty good OA Hugs.

A: The beer is jet black in color. It poured with a half finger high dense dark tan head that died down but never completely faded away, consistently leaving a thin head covering the surface and a narrow collar around the edge of the glass.
S: Light to moderate aromas of chocolate, dark malts and coconuts are present in the nose.
T: The taste has flavors of chocolate and coconuts along with notes of vanilla and hints of hazelnuts. There is a slight bit of sweetness.
M: It feels medium- to full-bodied and silky smooth on the palate with a moderate amount of carbonation.
O: This pastry stout is deceptively drinkable considering its strength and hides any traces of alcohol from the taste. If I had to guess without knowing, I would have thought that this beer was only 8% abv, not double that amount!

Fear The Sunset from Kings County Brewers Collective (KCBC)
Beer rating: 4.31 out of 5 with 9 ratings