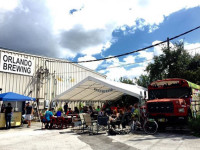 Very nice open layout with tall ceiling and a long bar. Nice outdoor area. Dog friendly. Very well decorated. We were served by a very friendly and knowledgeable bartender who was definitely on top of her game. With over 30 beers all made (organically) on the premises there is absolutely something for everyone. Located in an industrial area very close to Orlando Region Medical Center. If you are in the Orlando area this one is definitely worth a visit.

Conveniently right around the corner from Orlando Health--who said having a brewski after some radiation treatment was bad for you?!

This is in a nice, quiet little back lot with its own parking. As soon as you pull in you feel like you've escaped the insanity that can be the never ending grind of Orlando. Seriously, this area is damn near dead by comparison, with an almost Burning Man desert town vibe as a beat up, hand painted school bus is the crown jewel of their courtyard.

The interior, though, is a mix of modern 'Merica and spacious rock bar, with a few high top tables scattered here and there. The selection of beers they had on draft was actually quite staggering, and ran the gamut of styles. I think there were at least 30 drafts on tap! I only had a few while we were there but they were solid--particularly the ESB, which really hit the spot.

Awesome little spot off the beaten path a stones throw from downtown back in the industrial area. Free tours at 6PM every night except Sunday. Live bands on Friday. Only all organic brew in all of Florida and like 1 of 11 in the U.S. A few table top games to play. They also have darts and giant jenga. No food yet but their looking at opening a second locale with more of that pub feel while the tap room remains as is, a tap room. Awesome spot and could have spent the entire day if I had the time.

Great beer with events happening outside. The organic beer is a new twist and it has a great taste to it

Spacious, dog-friendly, beer-garden outside, large bar, clean bathrooms, super friendly staff, attractive bartenders, great beer if you aren't a snob or looking just for high ABV stuff, like myself, if you're like me, look out for any Senator releases, like RUM BARRELS. It's delicious, well-made and super limited, they don't bottle it either, you can just drink your fill there. One of the better lolly-gagging things to do in Orlando, when you're here. Otherwise, garbage beer for the whale chaser. ALL ORGANIC.