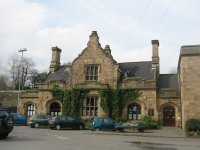 Housed on Platform 1 of what is now called Dewsbury Railway Station, it is part of the original 1848 Grade II Listed Stone Building that formed the old Wellington Road Stn. Since the end of Steam (1968) it had fallen into an unmanned decline. In '94, Mike Field, with the help of the Batemans Brewery, renovated the old waiting rooms into this architectural beer masterpiece.

You can access the WRLRR from either the rear door, on Platform 1, or from the front entrance in the Car Park, which used to be the Goods Yard. As you enter the bar from the Platform there is a small corridor immediately to your right that runs through to the Beer Garden which is in, but annexed from, the Car Park. A small room forms the corner of the bar. To the left, through an archway, the lovely wooden bar serves a range of up to 8 Real Ales & houses the main room. Through another archway, there is one more room, popular with diners & where the Kitchen is housed. Beyond is the front entrance in a corridor as well as the restrooms. Real Fires are pressed into service in the Winter.

The décor is described as Italianate/Tudor Style. Expertly & sympathetically refurbished, it is a real pleasure to drink in this high quality establishment. Many of the windows & doors have stone Arabic Arches which are rare. Old Timetables, Station Signs, Breweriana, including a Poster for the 1st Kirklees Beer Festival over 20 years ago, as well as other Railwayana, often from the defunct London & North Western Railways (LNWR) that operated the line, adorns the walls.

The 8 Handpump Real Ales always include a Black Sheep Beer & Timothy Taylors Landlord. It will more often than not have a beer from the Anglo-Dutch Brewery, which was also started by Mike Field and Paul Klos, who is the Manager here. It also plays host to a good range of Belgium Beers & a smaller German offering. It was experimenting with draft versions during my last visit. Lunchtime & Evening Meals are very popular, but you have to wait a little at busy times.

If this is not enough Beer Pedigree, then it is twinned with the tBrugs Beertje in Belgium  Enough said!

Sit in this legend & listen to the hustle of the working railway station, watch the trains come/go & the people board/alight. You think of these travelers as you quietly drink on your beer & thank your lucky stars that today at least, whilst you sit in here, you are not part of them. It should be Grade II Listed for its Beer as well as its Architecture.