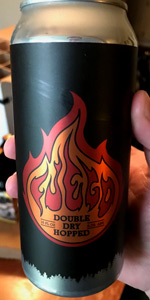 4.24/5  rDev -0.7%
look: 4 | smell: 4.25 | taste: 4.25 | feel: 4.25 | overall: 4.25
Pint on draught at Passion Vines in Somers Point. Served in a tulip glass. It pours a turbid, muddy yellow color with a half finger of frothy, milk-white head and sudsy lacing. The fragrant smell includes lemon, lime, grapefruit, peach, and lite floral hops. Its taste is dank and sticky with bitter lemon and grapefruit, along with onion, and a hint of white wine. As it warms I'm also tasting peach and melon and it becomes sweeter. This ale has a thick, creamy feel with appropriate carbonation, and it drinks very easily at 6.2% ABV. Overall, it's a very good variant of a very good base IPA.
Sep 02, 2022
Rated: 4.25 by paulish from New York

o: quite refreshing for a hazy IPA. it's bitter with a slightly fluffy mouthfeel. not quite a full-on NEIPA, but close

Rated by BillBarnshaw from New Jersey

Notes via stream of consciousness: Hazy, even cloudy, golden body with an orange sheen beneath a short head of bright white. With the exception of the head it looks a lot like a hefeweizen. The aroma is bright, bold even, with lots of juicy citrusy hops and light floral notes. The flavor is not as bright as the aroma but the flavors remain: orange/tangerine, apricot, sweetened red grapefruit, mango, some pear, papaya, and a spritz of lemon. There's also some "dankness" and light pine, grapefruit rind, mineral/earthiness, and herbal & grassy notes (some sage for sure) in there as well, and it's well balanced against the grainy and bready malt and bitterness - which doesn't seem that high, I'd guess around 40 IBUs. I could drink a lot of this! What's the alcohol content? 6.2% ABV, that's not bad. Ahh, I get some spiciness and berries in the burp. interesting. It's medium-light in body and gently crisp with a fine-bubbled, seemingly natural carbonation (this might actually be lower than it is regularly due to the crowler fill). I guess the question is, is it better than the standard Fuego? Unfortunately I don't have an answer to that. I asked for a crowler of it to compare it to but they were only selling six-packs so I passed, but I should have bought that six-pack, huh? Ah, well, too late now, but it's a great beer regardless.