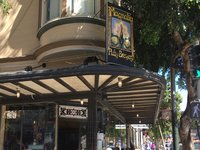 Cool atmosphere, I'm sure its been said a million times, Grateful Dead, pharmacy etc. . . overall, you're in one of the cooler corner spots on Haight Street, and while I usually never hesitate to bag on San Francisco, I really think the city has done a great job cleaning this area up, its actually not as miserable of a place as it used to be! Sure, there's still some bums, but they're the nice ones! Although it can be a little touristy, I think the place right next door or a block away, I don't remember, but anyways, they wanted like $35 for a tshirt! Hah!

Anyways, I've always thought the quality of Magnolia's brews and food was pretty good. They also seem pretty good at making styles I might not be into, their old super ipa stuff they used to bring to the Bisto in Hayward was pretty good, faded a little bit recently, but their gruit, barleywine, cask porter are all worth a try.

So I said food quality was pretty good, but yet, the score is only average. . . what gives you say? Well, let's talk about that fried chicken sandwich. Very good tasting. But you know what? It had about 3oz of meat on it, total, and that might be a very generous tally. I hate eating at places and then still being hungry afterwards, even when I'm drinking beer too.

Portions of the vegetarian stuff seemed to be larger, who knows, could have been a vegan cook or something that he makes the highest minimum wage in the country.

Waitress made about 3 mistakes, but was trying hard, so it all evened out.

Was in San Francisco on business, but had a free afternoon, so travelled over to the Haight-Ashbury area for lunch. Magnolia Pub & Brewery is located on a corner in a largely residential neighborhood and presents as a very homey, lived in pub. The food was solid to slightly upscale pub fare and the service was attentive and knowledgeable.

The selection and range of beers stretched from lager to stout, with about 18 taps (including 3 guest taps with Fort Collins) and two cask conditioned offerings. I had a flight that was consistently very solidly well made. Overall, a very enjoyable, low key P&B experience.

I found Magnolia while walking around the Haight-Ashbury area and stopped in for a couple of beers. They had 17 taps, including 5 cask offerings, plus a guest tap. I had the mild and the porter, which were good if not outstanding. Service was typical, decent bar service. The vibe is very pubby with lots of dark wood and a lived-in feel. It's a neat place if you're in the area.

Visited on a Monday evening.

Located on Haight Street, this is in it. Really cool look to the place. So much history. Neat in the winter when the windows fog up inside. Beer is solid, they've been doing this awhile and are reliable.

Service is good too, never come across that uppity SF waitstaff so I'm entitled thing here. They work for their money. Selection doesn't yield too much weird stuff, an occasional gruit or gem from the cellar, but other than that, usual styles for the most part. Good food.

Very cool English style brewery and BBQ place. Beers are only good-to-average, but the place is pretty cool. BBQ is excellent, but you pay $$$$ for it. Beer is more fairly priced.

Lots of English style ales. Lots of hand pumps. $4 imperial pints since it was Tuesday. Pretty chill place with and English theme. If you like bitters and Esb, this is worth checking out.

Great location right in the middle of Haight area. Busy pub with dark wood cosy vibe. Beers selection is heavy on the English side and doesn't suffer for it. Had 5 casks on when I was there and about 15 others on draft. Staff friendly and food great, especially the cheeses.