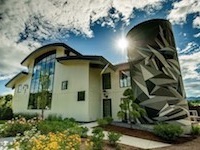 Rated by Unitspin from Massachusetts

The outdoor Biergarden provides a wonderfully scenic (if small) area to enjoy on-site cans (not pours). If you're headed there only to pick up a case (or two) of beer, I recommend chilling and enjoying the ambiance for a bit. It's a lovely area.

3.34/5  rDev -26.4%
vibe: 2 | quality: 4 | service: 4.5 | selection: 2
The last time I was here in 2016, they had just finished building this production facility, but you couldn't go inside. I was still excited at the prospect of coming back, whenever that might turn out to be. That time just so happened to be now, and they were closed for a private event just after having completed--or still in the middle of--some sort of renovation, so we still couldn't go inside. Talk about luck!

That there was also some kind of crazy bicycle festival or some such happening was the cherry on top. It drew a decent crowd of people who largely didn't seem to care or really know much about their beer, which made it all the more crazy than I'm sure it usually is, particularly for a Saturday afternoon.

Now, I know they have no real incentive to make this a taproom where you can come in, warm up and sit down to have a deliberative pint--considering the massive volume they sell of packaged product, even locally--but still, it's kind of off-putting that you have to drink everything from the can, outside, in the rain, or else shove off. What's worse is that three out of the four beers available at the on-site stand clock in at around 8% ABV. In full ass pint cans, no less. I didn't really feel like getting tanked off two beers while the sun was still trying to shine, and not having any food available only amplified that possibility, so unfortunately we had to dump some of our beer before we headed out for lunch.

I will say, the service at the can station--both at the on-site stand and also at the separate to-go area--is not just prompt, but fast af, dawg. The to-go lady may have been a little terse, but between dealing with an endless line of curbside pickups on top of random walkups, both at rapid speed, I'm sure it feels more like a thanklessly robotic job than a personable one. Plus, you can't really beat their prices in the craft beer world.

It's just weird they call this a Welcome Center, when you are anything but.

3.65/5  rDev -19.6%
vibe: 3.75 | quality: 4.5 | service: 4.25 | selection: 2
Only a handful of beers available, with indoors closed for renovation. Outside beer garden was pretty laid back on a cool, drizzly day. The IPAs were great, and the one other style (a Pilsner) was decent. Single server was helpful and in good spirits explaining the choices the customers had. Overall, espcially during renovations, this placed played out as more of a production brewery than a major destination to try a few things on tap (maybe at some point we'll get inside and find if it was just the circumstances).
Sep 12, 2021

4.33/5  rDev -4.6%
vibe: 3 | quality: 4.75 | service: 4.75 | selection: 4
First time here on a day trip from NY. Not what I expected at all. Very modern and right off the main road. I was imagining a more rustic spot in the hills. The vibe was rest area parking lot. We ordered online the day before and did pick up. The web site has very specific instructions for curbside, these rules are not followed. We pulled up, got out, opened the hatch and loaded our beer. The employee did make sure we got what we ordered, I liked that. The building was closed so we drove off. The beer is amazing, crusher was on the site the next day so we missed that. Zomer is great as are all the others. The Heady was only 4 days old and les than $13 a pack. If I lived nearby this would be my weekly beer spot. Hope to get back once the building opens back up.
Jul 30, 2021
Rated: 3.9 by avisong from Virginia

Rated by shawver74 from North Carolina

3.39/5  rDev -25.3%
vibe: 3.75 | quality: 3.5 | service: 3 | selection: 3.5
What I bought: Three four-packs of Heady Topper and one t-shirt.
What I liked: Pungent smell of hops smacks you in the face as you walk in the door, quirky signs explain the history of the beer and brewery, well-organized retail store has lots of Alchemist schwag.
What I disliked: The woman at the cash till was thoroughly uninterested in talking beer, even though we said we’re from Toronto and I bought quite a bit of stuff. Oh well.
Would I go back? For their world class DIPA, yes. And it’d be fun to do a brewery tour providing the lady who served us wasn’t running it. :)
Overall Rating: 68

Reviewed by colby600 from Connecticut

4.3/5  rDev -5.3%
vibe: 4 | quality: 4.5 | service: 4.25 | selection: 4.25
I've been here a couple times and thoroughly enjoy their beer. Small area to try some samples but no pours are offered. It would've been nice to have more samples available of beer currently offered in cans to make a more educated guess on purchases.
Oct 27, 2019
Rated: 4.7 by Barleycorn from Pennsylvania

Reviewed by SSGCujo from Wisconsin

Reviewed by kelvarnsen from Canada (ON)

4.59/5  rDev +1.1%
vibe: 4.5 | quality: 5 | service: 4.5 | selection: 4.25
Visited here in the summer of 2017. Such a well designed and modern looking facility. Easy to find once you make it to Stowe. They had free samples of 3 of their beers including Heady Topper and all were very tasty, and generous. The line up to purchase beer took no time to get through. The only real negatives is no tours (although you can easily see the brewery from the tasting area) and no beer samples outside, which is too bad since the surrounding property was really nice, and would be a great place to relax and have a beer.
Aug 12, 2019
Rated: 4.33 by Ryannotbryan from Texas

Reviewed by Zraly from Virginia

Free tasters of Focal Banger, Heady Topper, and a limited or seasonal on tap. This place makes enough that there is no need for anyone to sweat the small stuff. $4 for a full pour. Any tips are donated to local charities. Outside there is seating and a few lawn games for entertainment. All four packs are $12.50. The business model of compensating your employees properly and thus not relying on tips, etc. should be a model for other successful brewers.