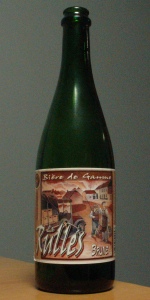 A dark brown beer with an off-white creamy head that recedes into a 1/4 inch of foam.

Smell is a little roasty with sweet melon and rhubarb.

The beer tastes so light in a good way. The beer is light malty, larded by candisugar. Notes of dark fruit like dates and melon. This beer is very drinkable.

This beer pours a murky, dark red-tinted golden brown hue, with two chubby fingers of foamy and burbling beige head, which leaves a few examples of manta ray maw lace around the glass as it evenly recedes.

It smells of lightly roasted caramel malt, earthy black fruit, a slight licorice tint, some dusty and leafy hops, and the tiniest bit of booze warming. The taste is biscuity caramel malt, a strong oily nuttiness, some soft ashy wood notes, a bit of baker's chocolate, a twinge of earthy yeast, and some mild leafy hops.

The carbonation is average, no fuss or muss there, the body a decent medium weight, with just a slight metallic edge detracting from the overall smoothness. It finishes with the malt on the wane, though still nutty, fruity, and caramelized enough, with the offset of mild alcohol and musty old basement hops gaining a bit of ground.

If the category of "Belgian Brown Ale" existed, this would be a cinch for inclusion, even if the Belgian part is fleeting at best. A nice toasty, nutty, and fruity brown ale, one that could teach the lads in Newcastle (or even Brooklyn, for the matter) a thing or two.

From a 750ml crown top bottle. Very dark ale with a beige head, with a good head retention. Smell of chocolate malt. This beer has a taste of chocolate malt, some hard too find spices. This beer is like lace in the mouth, very tasty but easy drinking ale.

A: Pours a dark amber to brown color forming a medium and bubbled beige head. Good retention with a thin layer that remains forever on the top. Lots of thin molasses formed and left in the glass

Burgundy. Full of fruit flavors (plums, grapes as well as citrus in Rulles Blonde). Mouth malted barley and yeast, which adds the syrupy side. In addition to the dryness of the hops, there is a fruity interesting (probably due to the Amarillo hops) that is accompanying a persistent finish that offers a strong drought.

I picked up a bottle of La Rullés Brune (Bière De Gaume) a few weeks ago for $10.99 at Oppermanns Cork N Ale. I was looking for a new Belgian beer to try and this one caught my eye and I thought I would give it a try, so lets see how it goes. No visible bottling date. Poured from a green 750ml bottle into a tulip.

A- The label looks nice, it's got a nice design to it and i think it's just a little eye catching. It poured a nice cola brown color that took on a just some slight ruby hues around the edges when held to the light with three fingers worth of fluffy tan head that died down to a thick ring that stayed till the end and it left some rings of patchy and spotty lacing behind. This was a good looking beer, I have no complaints.

S- The aroma starts off with a lower amount of high sweetness with the malts being the first to show up and they impart a nice light roasted, caramel, sweet malt and light toffee like aromas. Up next comes some yeast which imparts a somewhat lighter peppery aroma that's followed by the fruits which impart some nice dark fruit, apple and raisin like aroma with the raisins sticking out the most making for a light sherry like aroma. This beer had a pretty nice aroma, but I wish it was just a little more complex.

T- The taste seems to be similar to the aroma, but it's lighter and it starts off with a medium amount of sweetness with the fruits being the first to show up this time and they impart the same aspects that they did in the aroma, but this time it's the apple that sticks out the most with the other fruits showing up in the background. Up next comes that same spicy yeast aspect that I got in the aroma and it's followed by the malts which impart the same aspects that they did in the aroma with the caramel and light roasted malts sticking out the most. On the finish there's a lighter amount of bitterness with just a slight bit of tartness with malty and fruity aftertaste. This was a decent tasting beer, but I thought it was a little bland and I wish the taste was more like the aroma.

M- Smooth, fairly clean, a little crisp, on the very light side of being medium bodied with a medium amount of carbonation. This beer had a nice mouthfeel, but it got to be just a little watery.

Overall I thought this was a decent beer and I thought it was just slightly above average for a Belgian Dark Ale, it was pretty smooth, but in the end I thought it was just a little bland and I wish the taste was as bright as the aroma. This beer had ok drinkability, it was smooth, fairly clean, a little crisp, not filling and the taste didn't do the best job at holding my attention, one glass is a good amount for me, I could drink the whole bottle, but I think after one glass I would start to get bored with it. What I like the most about this beer was the appearance and aroma, they were both good and they were the highlights of this beer. What I liked the least about this beer was the taste and mouthfeel, they weren't bad, but they could both use just a little work. I don't think I would buy this beer again, but i wouldn't turn down a glass and i can't say I would recommend this as a great example of the style. All in all I was a little indifferent about this beer, I didn't hate it,but I didn't love it either, and I wish it was just a little more complex and interesting. This beer made an Ok first impression for this Brewery and I would be interested in trying more of their beers. I didn't mind this beer, but I think it needs a little work, better luck next time guys.

Overall. I have to admit, this isn't among my favorite styles, but a drinkable beer to say the least.