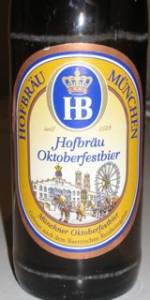 Notes: The Oktoberfest originated in 1810 in Munich, Germany, as a wedding celebration for the Crown Prince Ludwig of Bavaria. This product was created especially for this event and is brewed usually for the Oktoberfest, now the largest beer festival in the world. Hofbräu München (HB) is one of a selected group of breweries granted the privileges of supplying the Oktoberfest with their products. Using the highest quality ingredients, HB's Oktoberfest Specialty has its own distinctive and unique taste.
View: Beers | Place Reviews
Reviews: 660 | Ratings: 1,647 | Log in to view all ratings and sort
Reviews by throwback:

Perhaps not the gold standard, but certainly the silver or bronze standard for German Oktoberfest beers. If you are expecting the overly sweet and heavily malted brown yank style look elsewhere, but this is a fine beer,

Bought in Japan, poured from a 500 ml bottle into a tall glass.

Look: Pours a crystal transparent pale golden straw color. A deep and compact head formed of tiny white bubbles springs up and then slowly falls down to a thin film. The bubbles cling to the walls of the glass forming a thick lacing around the glass.

Taste: Malty sweet on the palate with a hop bitter afterkick. Undercurrents of honey and straw are perceptible. Not terribly complex, but pleasant.

Feel: A very gentle mouthfeel here with the malt and hops balancing each other nicely. Medium carbonation plays across the tongue with a mild prickly sensation.

Overall: A nice octoberfest beer and exemplifying the style very well. Nothing unexpected present and an easy to drink brew. A few flaws present that might be attributable to improper storage, but overall very solid.

Pours a clear golden color with a big top off nice fluffy head, that disolves in a fast pace with some lacings on the side off the glass. The aroma is off bread,grass,grains,citrus and earthy hops. The flavour is dry and slightly sweet with some caramel malts in the back. it finishes off with earthy hop bitterness and some sugary sweetness. is light carbonated with a medium body. The mouthfeel is creamy and smooth but heavy, and i miss the crispness. All inn all is a good and enjoyable oktoberfestbier, but not overwhelming impressive.

Pours a pale gold color with a thin white head.

Smells a lot like a lager, perfume and floral scents.

Overall a good fall seasonal. I prefer more of a robust malt flavor

From a 500ml bottle served straight from the fridge at 8 degrees Celsius into a white wine glass. Best before date: 20.06.2018. Reviewed live in Toronto in the comfort of my own place.

Look: The beer pours a brilliant yellow/pale gold with 6cm of creamy, moussy, white head that fades into a craggy cap in 3+ minutes. Decent lacing and overall head.

Taste: Follows suit with the aroma. Mild strength and balancing towards sweet. Fruity, floral, and spicy hops with toasty/bready pale malts. The finish is short and bitter with mild strength.

Feel: Medium-light body with mild carbonation. A bit creamy and quite delicate with no apparent alcohol which at 6.3% ABV is not unheard of but yet quite commendable.

Overall: This beer strikes me more as an international lager than a märzen or a festbier. Simple in nature with only mediocre drinkability. What surprises me is the fact that this beer has some elegance to it. Throughout the consumption I've been wondering if this is a brew worth trying or not and by the end of the bottle I've decided it's just not worth it. There's an ineffable unpleasantness in the flavour and mouthfeel that just get to me (an adjunct quality?). I wouldn't buy it again.

Surprisingly smooth over the tongue and on the pallet. Golden, clear non-diffused color. Pours a manageable head from the finely detailed bottle from Munchen.
Not unlike Erdinger which I used to have kegs of at our annual Oktoberfest in past Septembers. Very repeatable bier.

Poured into a .5 liter mug.

With slowly rising bubbles, a clear golden body holds up a nice white frothy head that retains well. Thick, random patches of foam stick to the glass. The aroma is spicy from hops and really buttery from malts with a faint skunk aroma from the green bottle. The taste is spicy as well and it covers up any malt presence although there is a very basic toasted grain and buttery element. Mouthfeel is medium bodied and dry.

Overall: Really comes off as more of a Helles style of beer with a bit too much spice from hops.

Appearance  This one is light yellow in color with some mild carbonation. It looks more like a Helles Lager than an Oktoberfest. The head was modest and went down rather quickly.

Smell  This one smells like a grainy Helles, too. Where are the toasty malts?

Taste  Ah, a bit more in line with the style at the taste, but not much. There are some good caramel notes here but the grain is out of place.

Mouthfeel  A bit bigger than light-bodied. This one is almost refreshing and crisp.

Drinkability  This really wasnt a bad bier, but its not even close to an Oktoberfest.

An interesting choice for my Christmas beer present from my girlfriend. Of course, it is a little behind the times but that's okay. I was meaning to try this two months ago but tons of things to drink before winter.
This beer starts with a middle gold color and a nice snowy cap of head.
The lace stays with every sip, coating the pilsner glass. The nose is thin with hops and caramel malt. I also detect some adjuncts which aren't as nice.
Taste is crisp and fresh and a little overcarbonated but not too bad. There are hints and fruit and spice laced around the malt The taste is only moderately strong but well balanced, with a hop backround.
This is a beer that grows on you. I can definitely see pounding endless giant steins of this next time I'm in Munich.

brpendergast85 from District of Columbia

Just had a sample, but a pleasant surprise. Looks like it would be light and and weak but not at all. Very tasty, in fact I'm gonna get a couple before the game

Look is surprisingly light, slightly darker than a typical euro lager. Smell was fantastic. Taste was not too sweet, but still malty, with a slight toasted brown bread flavor, enough hops to balance it but leaving it malt forward. Mouthfeel is medium but the finish is semi-dry. Definitely a lighter version of the style, perhaps this is a better representation of what it should be? I really enjoyed it, without a doubt one of the top two favorites of mine. There is a slight alcohol warmth from the 6.3 abv, but you don’t notice it too much. Cheers

Boy, the Germans just can't get over this blonde hair thing, can they? Even their Oktoberfest beers have to look Aryan. What should be a dark gold to deep orange-red colour is actually a pale, sparkling clear yellow a la pilsner. It's also missing its characteristically solid, off-white, foamy stand. All species of vertebrates can be affected by missing melanin pigment and apparently so too can beers: this is an albino Oktoberfest.

And it smells like it's missing more than just melanin pigment - Vienna and Munich malts are nowhere to be found. There is not a trace of toast nor any reason to believe the grist was comprised of any malts darker than pale/pilsner. It is a clean lager aroma, I'll grant it that, but it's far better suited to a pilsner or Munich helles. Did they bottle the wrong thing?

Here's what I'm used to tasting from a Märzen: a distinct malty sweetness, with significant dryness, a smooth lagered texture, a definite toasted aspect and an earthy, moderate hop bitterness. Here's what I'm tasting from this: pale malts. And water. Maybe a hint of white bread. That's it. There's definitely not much flavour...

But that doesn't make it a bad beer; on the contrary it makes it a great beer (for easy, heavy consumption drinking). Its brisk carbonation, feather-light bitterness and crisp maltiness make it supremely well suited for hot, summertime weather. It may not make a great Oktoberfest but it sure as hell makes one hell of a quenching beverage!

I would love Hofbräu Oktoberfestbier if only it were labeled something else. You'd think with almost 500 years of brewing experience the Hofbräu people could get the recipe right; it isn't, after all, that complex of a style. (Note: the BJCP does explain that most domestic German examples are commonly golden and, like this, more like a Pils or Helles.)

And indeed it also lists this as a leading commercial example. Still, it's nothing like what I'm familiar with for the Märzen/Oktoberfest style (then again, who should know better, them or me?) And it's likely nothing like what most North American drinkers would be used to either. It should, however, be something they find agreeable, if not pleasant. Never mind the colour and celebrate October as if it were July or August.

On tap poured in a 1L stein at the Hofbrahusaus in Las Vegas and from a 12oz bottle numerous times. Pours clear light golden with lots of fine bubbles and a thick smooth creamy white head. Sweet malty aroma with some grassy noble hops. Medium sweet upfront caramel malty taste, almost like a mai-bock, followed by light grassy hops and a distinctive alcohol finish. Medium body very crisp and a bit creamy.

Very pretty looking beer it’s much brighter and golden than my picture shows. Very nice head that is still lingering halfway through. Which is dangerous cause I would never guess this is over 6%.

The aroma made me think pils, but that could be cause of the color. It tastes a subtly sweet like a helles, but it’s crispier to me. There’s also something extra that makes me think of darker lagers, I’m guessing it’s the abv that gives it that sensation. The sweetness lingers pleasantly long after each sip.

Overall I very much enjoy this beer and it’s dangerous because it is so drinkable. I’m very glad I grabbed a six pack and will happily enjoy the rest of them.

Poured from an 11.2oz. bottle into a US tumbler pint glass.

A: The beer is a very light gold color with a large white head that fades slowly and leaves a spotty lace on the glass.

T: The taste starts out a little sweet with flavors of grain, lager yeast and a thin malt character that also brings some mild sweetness. The hops presence is faint but brings some balance. The after-taste is slightly bready and slightly sweet.

D: A little tasty, goes down very easily, not too filling, decent kick, not the best representation of style, although this beer is a lot lighter than most O-fests it's a bit more poundable than most O-fests as well.

Hofbräu Oktoberfestbier from Hofbräuhaus München
Beer rating: 80 out of 100 with 1647 ratings