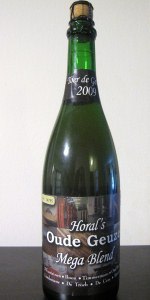 Etreme!, Chef driven! It slices, it dices, it julliennes!. There's so many catch phrases out there that seem like a good idea at the time, but now gets commonly mocked. Hell, even my deodorant says "Extreme!". "Mega" is certainly one of those words that draws the ire of the consumer, but when a beer has the involvement of 3 Fonteinen, Boon, De Oude Cam, De Troch, Hanssens, Lindemans, Oud Beersel, Tilquin and Timmermans then "Mega" might just be fitting for the occassion.

With an excited pop of the cork and a glass awaiting the geyser-like foam that escapes the neck, a bubbly, expressively carbonated, champagne austere begins to radiate from the MegaBlend Horals Oude Gueuze. Golden, lightly haze and dancing like a snow globe of yeast, the frothy, cottony sour ale leads with a citrusy, peppery, winey, woodsy and parmesan perfume that's remiss of saddle leather, a brisk and briny scent of the sea, and damp cellar-like conditions. Low lying sweetness of sourdough, simple syrups and honeysuckle skirt under the surface of the sourness as the ale rushes off of the front of the tongue.

Its racy carbonation pushes the beer off of the tastebuds with a zesty, minerally zing; pushing any sweetness to the back of the throat in a hurry. The taste explodes with notions of dehydrated citrus of orange, grapefruit and lime. Musty in its tone, a sense of pear, green apple and white grape follow as an overwhelming spice quickly takes command of the taste. Peppercorn, driftwood, vinous spice and a piquant sourness that's nondescript but succinct ushers in a great sense of dryness and palatability to the late palate.

Distinctly acidic, briny and chocked full of yeast spices, the dry sourness should expose flaws in yeast handling or abuse in brewing technique, but there are none. Peppery forward and exiting the palate with a quick aftertaste of white wine and a retro-olfactory sensation of those leather, fruit rind and oaken whimsies that drift shortly afterwards. This beer is among one of the premiere sour ales on the planet.

2017 blend. An active, potent, and beautifully nuanced gueuze. Pours a bright golden with some white bubbles not even concentrated enough to be foam. The smell is full of hay, mushroom, grape, oak, flowers, sugarcane, soil, lemon, and apple. The taste has all of those plus some white bread, pineapple, belgian yeast, lime, and what I can best describe as a touch of savory pork. I thought this was really good, but more aging would help the balance a bit.

Smells of blue cheese, old basement and fresh squeezed lime. Has a lingering toffee sweetness, which blends marvellously well into the citraic quality, adding a ripeness to the fruit.

Offers a soft mouthfeel with a well nuanced effervescence, revealing a great, refreshing balance throughout.

Tastes of dried mushrooms, lemon zest, leather and a fruity bitterness with a herbal peak to it. Turns smoother, with an aqueous softness and maintaing lemons with a subtle note of funk. Finishes heavier on the mushrooms with a floral, herbal interplay.

Great beer with a fantastic depth, which is an refreshing, easy drinker at the same time. Its funky mushroom interplay collides incredibly well with a peppery, floral and lemony peak.

Smell is funky and mineraly with notes of apples and some stable.

Taste follows the nose well, and adds some juicy oranges to the mix. Long, plesant finish. Not overly sour.

Mouthfeel is medium, with strong carbonation.

Overall, a great, very balanced gueuze, more to the mineral side than the sour.

2014 edition. From 32GP. In Teku glass. Playing 12 Labours of Hercules. Although Im not a fan of vinegars, this one is very balanced and approachable. Smooth, with noticeable yet not agressive funk notes. Very lasting foam and excellent in nose

2015 bottling appears a clear copper color with a white fluffy head that persists.

It tastes tart yet dry and citrus-like with some oak and earthy brett. The aftertaste has a slight pulpy feel about it.

This is light in body with modest carbonation. Its a very crisp and citrus forward blend that I really enjoyed. This has really come together nicely with some age. When I last had it freshly after release I thought it was ok but this time around it is fantastic. Might have to snag a couple more to see how it continues to develope.