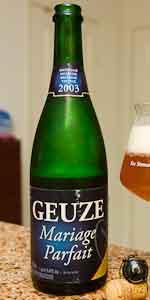 Notes: Boon Geuze Mariage Parfait has an alcohol content of 8%. It consists of 95% mild lambic, aged at least three years and specially reserved for this purpose, and 5% young lambic. The latter provides the fermentable sugars and wild yeasts. After mixing in a vessel of 25,000 litres, the wort (unfermented mixture) is filtered and chilled. If we are bottling, we bring it back to fermentation temperature. The bottles are placed in a climate-controlled space for the secondary fermentation. This is followed by maturing at low temperature for at least 6 months. Want to know the bottling date? Simply subtract 20 years from the “best before” date!

The soft, mildly sour berry taste, harmonises with the oak barrels’ aromas in which Geuze Mariage Parfait has ripen. The body speaks of vanilla followed by a bitter aftertaste of cloves that becomes increasingly intense. Sublime.

Palate: Right from the start, there is a grainy malt sweetness that is actually fairly surprising. I'm sure the higher ABV (8%) is responsible for that. There's tartness that quickly follows, but it really isn't a sour beer. Perhaps 7 years in the cellar has mellowed this out. So we open with some slightly sweet, musty, dusty grain and malt, alongside a very restrained tartness - mostly brett, but lactic as well. The brett influence is HUGE, and every possibly bretty note is in here. A bit sweaty, tons of overripe stone fruit - namely peach and apricot that's borderline moldy. Huge vinous quality, with both red and white wine notes. Tons of bright apple, pear, and plum too. The oak is front and center, going hand-in-hand with the funk, lending a bit wet woody note. Plenty if lactic minerality as well, which could be seen as a touch of salinity. The sweetness lends a bit of a funky honey note as well, right before the finish which brings some vanilla notes from the wood. In the finish, the sweetness subsidies, and that oak really ramps up and lends a nice splinter dryness. This accentuates the vinous character, and it finishes not too dissimilar to an old wine. Given the surprisingly amount of dark fruit and berry notes in here, it almost leans towards a red wine.

Mouthfeel/Body: Obviously, an ale of this nature is going to lean on the lighter-bodied side. Given the higher ABV, and the touch of sweetness that it lends, it really bumps that closer to medium-light in body. The effervescence, while not champagne-level lively, is definitely champagne-level fine, and shares the mouthfeel of an ever-so-slightly lazier champagne. Drying from the oak.

Overall: This is a nice gueuze. Now, are there better examples of the style? Certainly! I've yet to open any of my Cantillon bottles, but I'm sure this isn't in the same league as them, or Drie Fonteinen. I think the one thing really holding this back is the sweetness. If this were a bit drier, I think that would help open it up a little. Now, it's still fantastic, and it delivers more than any typical wild ale you'll encpunter. It's funky, it's colourful, it's balanced, and it's insanely oaky and rather mature. I think this is a brilliant gateway gueuze, and for the price and accessibility, how can you turn it down? Under $10 for a mature, cellared, authentic Oude Gueuze? Come on, that's where it's at! If your'e AN INSECT JUST LANDED IN MY GUEUZE... okay, little bugger out. It'll just add to the funk, right? Right. If you like sour ales, just try it. It isn't so funky that it'll put you off, but it's just funky enough to appreciate.

2014 vintage, batch 80306, Best before 12/04/2037. 12.7oz bottle (purchased at Garden Path Fermentation) poured into 14oz teku. Poured a lovely dark orange color with over an inch of white head that had very good retention and no lacing.

Strong funk in the nose, with some base grains showing through. And very soft floral hop notes.

Pretty similar on the tongue, with a very slight orange taste at the back.

The body was light, crisp, and smooth, with tartly dry finish.

Drinkability was very good, especially if you like the funk.

Overall, excellent brew. Might try to find older vintages, or age a couple on my own.

Pours a hazy orange with two fingers of off-white head that leaves a bit of splotchy lace as it quickly recedes.

T - the depth of flavor on this is beautiful. It’s not anywhere near as sour/tart as I would have expected. Wild yeast and a light funk dominate upfront and impart a light tartness and a deep earthy flavor. In the middle I get some of the green apple and lemon and it finishes funky at the end with some light spice. Alcohol is completely hidden. Beautiful beer. 4.5

M - thankfully the carbonation dies down a bit. It’s lightly effervescent and has a nice medium body. 4.5

O - an excellent Geuze that was a pleasure to drink. The layers of funky wild yeast in the beer that impart a beautiful earthiness are world class. 4.5

Bottle-conditioned, you may wish to rest for a while and pour with care.
L- Deep amber, with hints of orange, somewhat cloudy. Pours with thin white head that mostly clears quite quickly.
S- I get some fruit, wood and some leather.
T- Notably dry, tending towards sharp, some unidentifiable fruit. The oak aging does come through quite clearly in woody notes. The fruit note is now akin to gooseberry.
F- Dry, pretty bitter, the CO2 is already fast ebbing away. I suppose it's refreshing, probably the highest ABV% beer I've had I could find that focus-point in.
O- It's a most unusual style. At points I'm wondering if it tastes more like a dry sparkling wine than a beer. Interesting to try but too much challenge and not enough reward for me.

2013 Bottle. Enjoyed on 8.23.19.
L: Opaque hazy orange and golden nectar. Bright and stimulating white head.
S: Musty, funk, wild, oak, crisp pear, and hint of citrus.
T: Bright vinegar, wood barrel, complex layers of malt and sourness.
F: Tightly carbonated, foaming and alive. Lingering bitter and drying mouthfeel.
O: My first true lambic. This was quite the treat and is opens me to a world of complex and aged funky flavors. I thoroughly enjoyed it and it did a perfect job of hiding its 8%. I'd like to try another 2013 in a dozen years.

Soft yet tart; balanced but flavorful. I like this.

Aroma is surprising with plenty of vinous ripe white grape but also darker raisin and prune. Musty funk,
Perfumey oak, and a hint of spice (star anise?) that is reminiscent of De Dolle.

HOW HAVE I NOT REVIEWED THIS??

Tastes EVEN BETTER than it smells. Rounded fruity tartness up front, then ashen grain, then a magnificent finish of tart and spicy yeast with nodes if raspberries and vanilla.

Look: golden to amber with a thick white head

Aroma: It has a nice apple, lemon and oak aroma.

T: Slightly sour, champagne-ish in a good way, very smooth. Much better than I expected from the aroma.

O: Quite surprised by this one. Nice sour.

Would I buy this again? Sure. Its a very accessible Gueze and a fine example of the style. Though lacking some of the finer points of more well-renown Guezes, this is still a good/great beer.

Pours a clear, pale golden amber coloration with a large, foamy head. Smells sweet'ish, with mild funk and notes of red berries and green apple, with a hint of a certain herbal note. Taste is somewhat more complex than the nose, with fruity notes of white grape, tart green apple, red berries: cranberry, redcurrant, dark fruit: plum, as well as ligher earthy/woody oak notes, leather and hay, along with light barnyard funk, some herbal/spicy notes and a certain honey sweetness. Finishes sweet and tart, with some herbal/spicy notes lingering in the aftertaste. Smooth mouthfeel with a medium body and carbonation.

This has a good complexity and mellow balance to it, but somewhat lacks the funk, which came as quite a surprise to me after 5 years. Also a bit too sweet for my personal taste and the mouthfeel is a little flat.

2013 vintage. Extremely complex beer with just the right amount (a lot, but not too much) of funk and sourness. Leather, horse blanket, wild yeast, vinegar, and oak are all present along with some background grape/wine notes. There is some sweetness, not surprisingly for a 5-year-old beer, but it is well-balanced. A treat to drink and I wish I had picked up more than one bottle when I saw this last September.

Poured into a snifter

Overall: Love this Oude Geuze. It stands up there with the best of the style with a nice bitterness and good fruit flavors. It has an amazing moutfeel that lends itself to a highly enjoyable drinking experience.

A: Intense orange and hazy with a great with head with great formation and retention;

S:Complex with green apple and grapes, banana and phenolics, citric and leathery;

M: Mild acidity and grape with a dry end and mild alcoholic feel;

O: Complex on the nose and palate with it mix of green fruit , sour and bitterness, high alcohol profile, makes this beer more than a beverage it is an real experience.

Smell: brightly tart with just the right amount of sweetness; somewhat earthy and citrusy in character, like lemongrass or something. I really like it.

Taste: quite earthy in character with a tartness that is not as bright as the aroma. It's also quite dry, which really adds a champagne-like character here; it's very good indeed.

Mouthfeel: light body with with a lot of carbonation and a big if ephemeral creaminess. Good!

Overall: this beer really appeals to me. Tart enough, earthy, and dry; the alcohol barely even registers. This beer is dangerous.

A: Pours a golden yellow color with 2 fingers of head that quickly fizzle down to a decent cap

S: Farmhouse, acetic tartness, a bit of fruitiness, and some oak. Easy and straight-forward

T: Follows the nose. Starts off with the acetic tartness and then goes into some of the oaky and fruity notes including apple and pear. Farmhouse notes show up towards the end and throw some hay and other funk in there as well. Finishes with lingering oak, farmhouse, and very light tartness

M: Medium bodied with moderate-high carbonation. On the drier side

O: A very well done gueuze that is certainly on of the classics. Certainly one of the more oaky and dry ones out there. Worth checking out

This is fantastic. This is real palate opener. It's a little funky, earthy, soury, and different but in a good way. It's not too challenging of a drink like some people would think it is. Try it out if you can get your hands on a bottle. Another good thing about these style of beers is that they hold up for a while without going rancid. Cheers! A-

Vintage 2013. Poured from 375 ml bottle into a champagne flute. Clear, pale amber colored body, with a two-finger white head that settled rather quickly without a trace. Fruity aroma with notes of tart apple and cherry and undertones of cider vinegar and yeast funk. The flavor profile is almost identical. The finish is on the dry side, with a little sourness and and oaky astringence on the palate. Very well crafted and an exceptional beer.