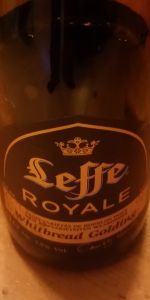 I am drinking this beer while in Rome. Poured from a brown 11.2 oz. bottle. Has a dark golden color with a 1/2 inch head. Smell is very fruity, some yeast. Taste is of fruits, spices, yeast, light malts and alcohol. Feels medium bodied in the mouth and overall is the best beer I have drank on this Italian vacation.

Such beer looks of a lively amber colour, dark orange, with a nice and persistent head of foam, of a thin grain.
Aroma of malt, spices (cloves and pepper), banana, vanilla, pear and tropical fruits.
Taste sweet at the beginning, then spiced; traces of tropical fruits, caramelized malt, spices, pepper, banana, alcohol only at the end; aftertaste spiced and pleasantly alcoholic.
It is a very sparkling beer, very good and balanced Belgian beer.

Amber caramel color with a thin head with short retention.
Aroma with notes of medicine, sugar, faint hop freshness at the very beginning, some apricot and mild cloves.
Flavor with notes of candied sugar, cloves, mild banana, faint herbal hops, cinnamon and caramel. Dry aftertaste with a mild to medium bitterness.
Bordering medium body with appropriate carbonation. Alcohol of 7.5% is flavored perceived.
There is just a subtle difference to the regular Leffe. Still this is quite sweet, muffling most of intended hops notes.

Poured from the bottle into a tulip nonic pint glass.

Aroma has a lot of sucrose, but there is a tea leaf like hop in here it seems. Spicy malt and bread round out nicely.

Toasted malt on the palate with touches of fruity like English bitter and Belgian mild sweetness. Peppery body with aftertaste of black pepper and astringent quality.

Real neat Leffe beer that you wont find in the US.

Aroma is very yeasty and hefeweizen like. Lots of banana and clove. No hops whatsoever.

Taste follows the nose, like a heavier bodied hefe. It's good but uninspiring.

Mouthfeel: medium bodied, a bit of a spicy aftertaste.

Belgian IPA? Weird beer, uninspiring. I hope this guys can brew better than this.

Light head. Disappears quickly. Had it from a Belgian wide glass. I like the color. It’s between a Belgian gold and an amber ale. Pleasant nose, but the alkohol is a bit too present. Tastes surprisingly nice! Good vanilla note, but not too sweet. A very special beer. Absolutely recommendable if you look for something new from Belgium.

Aroma is very yeasty, yeasty in a brewery chimney kind of way. Hangs in the nasal passages like a ploom of yeast smog hangs in the air, you'll either love this or hate it.

Feel is a little dry, aftertaste is on the bitter side, but enough to make you go back for another quaff.

Overall, a complicated brew. The Whitbread is very evident in both the look and aroma, yet the taste and feel is very Belgian and clearly reflects the 7.5% abv. Unlike most Leffe's there isn't the over sweetness usually present.

Like the aroma, this is a marmite type brew....for me it's growing on me, so persevere and have a couple before making judgement.

The Whitbread Golding variation of Leffe Royal looks almost regal enough to suit its elegant black and gold leaf packaging. But not quite. It doesn't pour with quite the same amount of head I'm used to seeing on the Blond and also has a more tarnished orange (rather than yellow) complexion. Clarity is mostly intact while lacing, disappointingly, is not.

The aroma is almost overwhelmingly that of overripe fruits: banana, apricot, pear and maybe pineapple too. And they all smell mulled or macerated; spice and alcohol aren't exactly shy. There's more than just a little vanilla in there too, something which enhances the sweetness and baking spice element (nutmeg, clove especially). It gradually becomes more raisiny.

Despite having an English hop varietal in its name, the taste is stereotypically Belgian: sweet, fruity and lightly spicy. Again, there's really no hoppiness to note; sweet malt and spicy yeast provide pretty much all the fuel for this fire. Mushy bananas, golden raisin, golden sugar, and mulled apples dominate on the palate and linger for some time.

InBev does an awful job explaining the concept behind Leffe Royale. Their own website simply lists it as "a top-fermentation beer made from 3 different hop varieties" but fails to mention which or elaborate any further. Internet searches turn up not just this Whitbread Golding edition but ones made with Cascade, Crystal, Mt. Hood and the obscure Mapuche. What's the deal?

Who cares. As mentioned already, Leffe Royal Whitbread Golding offers little beyond a flat mouthfeel, apparent alcohol, rotted fruit flavours and a borderline syrupy sweetness. I'd expect those sorts of characteristics from an aged beer but this bottle was released and purchased within the last year. I won't be making that mistake again, regardless of what's on the label.

This is not a belgian ipa, it's simply a belgian pale ale. The hops are aromatic, we can note the effort. But it's a lot about the classic leffe yeast character which makes it not that much royale

Who classified this as a Belgian IPA? Pours the color of honey with a med-large head that leaves a good amount of lacing. Pretty but filtered. Nose is fruit esters...mild banana, wheat, bread. Not sure where the dry hopping went (this beer is only 36 days old as I drink it). Flavor is creamy malt, vanilla, and maybe a little cinnamon in the finish. Interesting, but a bit odd as it warms.
Hard to understand the poor reviews below to be honest...maybe they tweaked it? Creamy mouthfeel with high but fine carbonation. Overall, a good beer in a land with too many other great beers.

Amber color with a gentle mist. On the surface of beer is huge, creamy in consistency, white foam, on average lasted.
The aroma of a little dry, are dark and red fruit, light floral and herbal.
Taste: re-seasoned, dark fruit and white grapes. Alcohol appears sharp.
Low bitterness and unpleasant, mixed with alcohol.
The loading medium toward high. Alcohol comes out slightly.

7.50% ABV. Serve at 8-10 C. No style is indicated on the label, but the website reveals it's a blonde beer brewed with three different hops, of which one is Whitbread Golding ostensibly grown in Poperinge.

Served cold into a dimpled mug.

HEAD: ~7-8cm wide. Off-white colour. Foamy and frothy. Retention is good for the high ABV - ~10 minutes. Leaves no lacing as it recedes.

BODY: Clear gold of above average vibrance. No yeast, lees, or other sediment is visible within. Has a clean look to it.

Not a great appearance for a blonde, bending a bit dark, but appealing generally speaking.

Suggests a simple but nicely balanced brew with okay depth of flavour.

TASTE: Belgian yeast adds some subtle spice to this otherwise plain brew. More amber than blond not only in appearance but in taste, with some breadiness throughout. Hop character is restrained: floral, a biteen herbal. Faint vanilla is the only subtle note in the build. It's cohesive enough, but depth of flavour is poor and it doesn't drink like a gestalt whole of a beer. Average flavour duration and intensity.

OVERALL: A ho-hum offering from Leffe, but by no means a bad one. The price could be better - ~5.20 euro for a 75cl is way too much given its quality (though, as always, price has no effect on my rating). I wouldn't buy it again, and it fails to showcase any hop character well, but I don't dislike it. You could do worse.

Ambergold colour with a thin but steady head of soapy foam. The smell gives you a full nose of whitbread hops initially, which is good, but it gets pretty metallic after a minute or so. The taste is fine: the sugary malt taste that is omnipresent in a lot of Leffe products also makes its appearance here, which is not something i applaud, but the herby hop taste complements it well, making it a decent beer. It still has the standard Leffe flaw though: it gets boring after a while. Mouth feel is soft and the beer is quite refreshing. One of Leffe's better brews.

Easy, accessible beer with lots of favor and aroma. Slightly sweet with hints of honey, as all Leffes. A good upgrade on the more classic blonde Leffe, and a very decent beer!