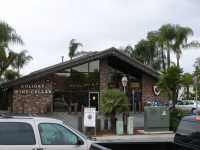 View: Place Reviews
Reviews: 97 | Ratings: 121 | Log in to view all ratings and sort
Reviews by Beerandraiderfan:

Brick store, in beer country north san diego. Big parking lot, not adjoined, cool, even took a leak on the side of the place w/o any hubbub.

Great product inside, amazing selection of stuff. Would be higher, but I'll get into that in a minute. Tons of hard to find belgian stuff, good amount of american rarities and standards. Prices are a little steep compared to what I'm used to, but when in rome. . .

Anyways, so I'm buying like $200 of beer, and I overhear the guy in front of me ask about beers 'in the back'. I ask if I can get a bottle of a certain beer 'in the back'. I'm told I have to talk to some jackass that works there (even though I'm talking to someone that works there). I says 'hey can I get ___ beer.' He feigns a sigh, like I'm putting him out, to ask to buy beer, at a store that sells beer. I say look, I've got $200 of beer up here, if you don't want to sell me beer at a beer store, fine. He then asks if I want 2 bottles.

Just put the fuckin' beer on the damn shelf. If you sell it out before I get there, so what. But making customers do such a lame charade is lame. Great store otherwise, but shit man ya know?

Most people seem to like Holiday. I used to until I started buying keg beer. I have experienced terrible customer service by their beer buyer (Mark) who didn't follow-up with the brewer to ensure my keg was delivered as promised. Instead, I was told too bad so sad and they tried to upsell me on a completely different beer style and brewer. No thanks. They didn't even offer to follow-up with the brewer to arrange an expedited reshipment. They didn't do a thing, which is strange for a small business. I recommend you buy keg beer from Lena's Liquor in Escondido or BevMo before going with Holiday after this latest customer service snafu.

First of all Vanessa is AWESOME. As I sometimes do I called ahead to find out about Pliney and other RR stuff and was able to do a phone order for pickup. Was looking for Temptation but they did not have when I called. I ordered a bunch of goodies and was pleasantly surprised to get a call a week later from Vanessa telling me they had a bottle of Temptation for me if I wanted it! Hell yeah! This place is not for from Stone and is a must visit if in the area. great selection of everything you would want if coming in from out of town.

If you're looking to pick up some bottles of stuff that's hard to find, this is the place to go. Helpful staff, ridiculous collection, prices are fair (not as cheap as some, but those others don't have the breadth).

I graduated HS and grew up in Escondido, and whenever I come back to visit my family I always make a couple of stops here during my vacation. If you do not feel like stopping by one of the many breweries in the North County, you could always stop by Holiday Wine Cellar to find and pick up some unique beer offerings. For me, this is the best bottle shop in the North County of San Diego. Wen I stopped in last week during my last trip, I was able to buy Lost Abbey Track 8, Older Viscosity, Peche Mortel, Hopparillo, Swami's, and Belching Beaver Old Dirty Barrel. They even had Mogli, which I can never find in Northwest Washington. This place has a great selection of craft beer, plus it also sells wine, liquor, and cigars. The employees were helpful and mostly nice, one guy seemed like he was having a bad day, but he was still helpful. The only change I would recommend is, brighten the place up a little. Well...it is supposed to be a cellar...

What a fantastic store. I came out with almost 2 cases of a variety of delicious brews and the customer service was excellent. I received help and recommendations from two associates. Sadly I had to leave some items behind but it was a gem of a beer/wine/spirits store. Don't forget to check out their walk in cooler behind the beer coolers. They also have a rewards program where you can get some discounts later.

First stop a few days ago was to check out this bottle shop close by to Stone. Medium sized beer area in the back left of the store, wine on the right, liquor filling in the front and middle and even a large cigar area on the far right of the store. I didn't even notice the back beer cooler or wine cellar until I wandered back there right before leaving. Atmosphere was pretty good, typical bottle shop feel really. Quality was pretty high all around. Nice furnishings and displays to go along with the beer glasses and beers. Service was pretty good, I was asked if I needed any help once but I was just browsing. Selection was solid all around. A few rarities sprinkled with with plenty of the typical local west coast offerings. Even more can be found in the cooler in the back so make sure you look back there as well. Prices were on par with the others in the area. Overall a really nice bottle shop, I would probably stop in again if I was going to Stone.