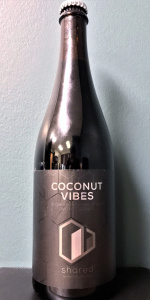 Motor oil black with burnt brown edges and no head but for some floating chunks of coconut lipids.

Taste is waffle cone and tangy chocolate malt with a touch of raisin. As it warms it develops some serious toffee and peanut brittle, but it's syrupy thick and sticky, and pretty cloying with a warming heat. I also get a little molasses on the nose.

It's no where near as good as the previous Coffee Shop Vibes, and it doesn't touch the Kane Coconut ANTEAD I had in the same sitting. Considering this batch 2 bottle got a huge amount of hype, it's just another STL bottle that didn't live up to it.

750ml bottle, batch 2. Supposedly 4x the coconut addition of the first batch. It shows, it has way too much coconut in it, which doesn't mesh very well with the big chocolate fudge of the base beer. It is too intense on both counts, which normally is not a bad thing but they just don't really balance well with each other. It's too sweet and weirdly cloying. Full bodied, creamy, thick and viscous- but the coconut and the imperial stout just didn't work. I think it just needed the barrel aging to really smooth it out and add something to break up the weird duopoly of sweet coconut and sweet chocolate malt.

Very viscous like motor oil on the pour. Opaque with a modest dark tan head that settled quickly. Aroma was full-on pastry with rich chocolate, salted caramel, faint coconut, and vanilla. Taste followed. Very thick and dessert-like. Flavors were bright, although on my palate the coconut tasted more like a sweet marshmallow compliment to the chocolate. Delicious and well-executed but I prefer less sweetness on the end.

It is absolutely mind-blowing how thick this beer is - it's surprising that a Russian imperial stout bears absolutely not trace of hop or bitterness... it's smooth, thick, and rich, with loads of chocolate and coconut. I'd love to drink this every day, but it's so much sensory overload that it blows up your palate. Also, diabetes.

Incredible beer - absolutely world class. The only coconut beer that I've had that is even on a level is barrel aged Coco Vibes. This one is the beer to beat.

L: Outrageously thick oily pour with a thin rust-colored head
S: Toasted coconut and suntan lotion
T: Liquid almond joy - copious coconut that is amply complemented by heavy doses of dark chocolate, milk chocolate, and cacao nibs with a slight nutty finish
F: Thick and chewy
O: Incredible beer - Blend #2 lived up to the hype for me. While it was very coconut-forward (as expected), I was surprised by the range and complexity of chocolate flavors. Very well executed and among one of the best non-BA stouts I've ever had the opportunity to drink. Well done.

Holy F'ing Coconut Batman!!! This beer is one step from just a straight up melted mounds bar in a glass. Fore sure different than anything I have had up till this point, but it does get a knock for also being the sweetest beer I have ever consumed. Luckily I shared with a few others, could not see drinking more thank 5-8oz's in a sitting.

Coconut Vibes b2 bottle I purchased from Side Project The Cellar.

This looked extremely dark, and caramel colored brown foam. Very unusual related to typical foam I see. The smell was huge amount of toasted coconut. It smelled up my whole room upon the pour. Taste was… well, more coconut than any beer I've had and it's not even close. It was loads and loads of creamy coconut to go along with chocolate. Very rich and very sweet. Feel is among the thickest beers I've ever had (probably top 3). It's a crazy tasty beer that's very sweet. This is the epitome of a dessert stout that's meant to be shared.

With a mouthfeel like rich, creamy, artisan chocolate milk, and not a hint of boozy heat in it's 13% ABV, this is without question the greatest coconut beer ever produced. If you love Last Snow, Fantastic Voyage or Death by Coconut, this beer is on a whole other level. You can even make a case that this beer might be the very best non-barrel aged adjunct stout every produced. Simply amazing.

B2 was a huge step up in mouthfeel, sweetness, and overall coconut flavor. Not sure I've ever had a stout that has the same authentic coconut flavor....floaties included.

very nice stout----a nice balance of baker's chocolate (not sweet) and coconut.... medium body, not at all thin, with faint sweetness but more toward the bitter--which is awesome, I don't like overly sweet stouts..... well balanced, with a long finish....really well-made and very quaffable for a stout!

Another vibes outing from Shared, this time with coconut. Shared with the Mrs., this pours pitch black, with a dark tan head if aggressive. Wife had a good amount of coconut "floaties". Strong malt bill on the nose, intermixed with coconut and a hint of alcohol. Very big and rich on the palate, with a flavor that coats the mouth and stays. Once again, there is a bit of coconut, but I was also pleasantly surprised with a good amount of chocolate. Overall, very enjoyable.

from the cask over at the cellar, my golly this is incredible. more intensely flavored and i think more dynamic than either of the coffee variants i have had of this one, and frankly one of the better coconut stouts i have ever come across. the cask pour obviously favors a beer like this, frothy, at perfect temperature, and with an even more silky texture that i think adds to the allure, but the beer is insane regardless of the format. the coconut is definitely toasted, it has that warming, baked, nutty an sweet quality to it, really strongly dosed but also extremely natural, a new benchmark for natural coconut aroma and flavor for sure in one of these. its got just the right amount of sweetness in it, and it brings a chocolate covered sort of vibe out of the malt, both dark and milk, roasty and rich at the same time, and while this is assuredly bitter from the malt at the end, it is far less so than the coffee variants were, just mellow, almost oak aged taste to the finish from the grain. so much body but its pillowy soft, starchy and heavy but also relaxing and creamy and awesome, the perfect feel for these flavors. coconut gets more toasty and earthy later on, and it ramps up with the booze as the temperature rises and it opens up awhile in the glass. an enormously impressive and delicious beer, incredible amounts of coconut to this, scary drinkable for its strength, and just a monument to quality. among the best of the shared beers i have had to date!

A- Jet black with rich coco looking head
S- Chocolate and coconut
T- Dark chocolate milk with a very natural and perfect coconut note
F- THICK... milkshake thick, especially due to the cask
O- One of the standout beers of 2017 for me

revisited out of bottle (batch 2). pours pitch black with dark mocha head. the head has bubbles in it like a kid who’s blown bubbles in their chocolate milk. almost has a metallic shine to it. once that dies down there’s some coconut floaties. smells and tastes of sweet coconut and chocolate. pure dessert, but nothing artificial and there’s so much chocolate in the base stout that it backs up the coconut perfectly. slightest bit of booze but nothing close to the 13%. hides it very well. thicker than all hell. possibly the thickest beer i’ve ever had along with Coffee Shop Vibes. overall, a fantastic stout.

Coconut Vibes from Shared Brewing
Beer rating: 97 out of 100 with 104 ratings