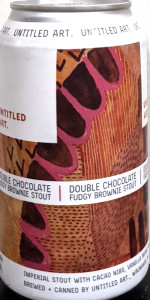 Pour some brownie in your cup & drink it with the latest and greatest (11.7% ABV) Double Chocolate Fudgey Brownie Stout. Our talented team of brewers figured out a way to liquefy a fudgey brownie center while also sneaking in some alcohol and ensuring a dark n’ decadent pour. Every sip is followed by a rich chocolate blasted fudge aroma and flavors are a procession of every chocolate dessert you’ve ever dreamed of. But what else would you expect when you brew with an entire drum of Hershey’s syrup, a dash of Cacao Nibs, and a couple hundred vanilla beans?

Found this bad boy hiding way back in the beer fridge.
Poured at 53° Into my Bourbon County snifter.
Nice tan head and Blam! it’s all chocolate on the nose. Trained my brain to buy into the ‘brownie’ description, but there’s a depth & complexity that’s much more.
I can taste the distinct Hershey’s chocolate - like from the can when I was young.
Deep and lush, quite viscous, beautiful long finish. The chocolate stays on the tongue for awhile. But I like chocolate to start with. The vanilla creeps in late and, yes, the fudge brownie comes with a burp.
The ABV is a compliment.
Delicious, sticky sweet, what’s not to like?
This is a worthy sipper, highly recommended.

Look: Extremely dark brown pour with a huge amount of foam rising the color of dark tan/ dark brown foam about 2-3 inches long.
Smell: Getting extreme notes of CHOCOLATE - very chocolate heavy with malts. Can't even smell the 11.7% in this. Very alarming but the chocolate smell makes me want to instantly drink this to see if the smell can match the drink.
Taste: Wow, fudge on the approach when sipped followed by bitterness then chocolate. I can see why they call it a fudgey brownie stout. you only get the strength of the alcohol at the back end (which in most imperials is the same) but this one almost covers it up. Which is remarkable in itself.
Feel: Medium bodied with very little carbonation, it does dry my mouth in the end - which is based upon strength level but it's a heavy drink for sure.
Overall: I was stunningly shocked on how good this was. I can for sure drink this on a day off from work or a night where I finished and have the weekend to myself. It's very rich, smooth, chocolatey good and will give you a good time after drinking enjoying the taste/ aromas this beer offers.
Overall:

Super chocolatey. The smell is just chocolate. I can’t smell anything else.
The taste has a little more, with some of the stout and vanilla bean coming through, but it is still way overpowered by the chocolate. Somehow, though, a mega super chocolate bomb of a beer kind of works. It is an intense flavor though. I couldn’t do this again and again.

Loved it. Chocolate well-done, great job of hiding the 11.7 ABV. Great stout for people that don’t like stouts- as long as they love chocolate. The chocolate is tasty without being too sweet.

I was absolutely blown away by this beer. Maybe I have been out of the beer game for a while so I don't know what brewers are capable of these days, but gee whiz. The smell *wreaks* of chocolate smothered brownies fresh out of the oven. The beer is an unassuming, deep black beer with a beautiful brown head and frothy lace, BUT the taste and smell is so authentic one couldn't tell the difference between a pan of brownies and the smell of this beer with a blind smell test.

There is a certain flavor reminiscent of cake frosting right out of the container that became all too evident. The feel, is sticky, sweet, and has a medium-thick and whip/creamy viscosity to it, So potently brownie and cakey flavored it's absurd, the heavy alcohol content is sneakily tucked away to where I could drink this stuff like water. It certainly doesn't feel like water - rather it's a full bodied, cakey, frosting, chocolate, brownie liquid surprise that is so inviting, compelling, and enjoyable that one could find themselves easily choosing to overindulge.

One of the best beers I've tried in a long time, they really nailed what they were going for with this beer and knocked that shit right out of the park. Highly, highly recommended. I really would like to see and discover more beers of this caliber, this was quite a great, dare I say eye opening beer that really jived with me.

A - Dark brown pour with no lacing.

T - Big fudge and chocolate presence that lingers for years with alcohol presence.

M - Thick and silky with a slightly syrupy texture around the edges.

O - This beer is a winner, hands down. Recommended.

Look: Dark brown liquid with a caramel colored head the vaporized in a flash. No foamy finger lacing in this one.
Smell and Taste: Take a chocolate milk shake and pour some bourbon over it and you have a Fudge Brownie Stout.
Feel: Flat. The speed that the head disappeared ice a giveaway.
Overall: The sweetness is almost too much for my like'n. I will say though, If you crave brownies you should try this brew.

Ordered from Tavour in 12 oz cans, chilled, and poured into an imperial pint glass.

Look: syrupy, dark, small tan finger size head that dissipated leaving a ring of foam and a thin layer of foam that stuck around a while.
Smell: chocolate, vanilla and some roast. Some booze, but mostly sweet chocolate notes in the nose.
Taste: big fudge up front, followed by some bitter roast, vanilla and chocolate trailing. For an imperial the booze is subtle but you get it on the back palate on the trailing drink, it lingers a while, but gives way to some bitter roast and funky brownie flavors.
Feel: Full feel, almost syrupy. A little drying. Little to no carbonation, you get some on the tongue but as is typical with an imperial, it is difficult to get it to stick around long.

Overall, we were a bit nervous because Untitled Art either nails the flavor profile or completely misses it. This one was exactly as described. This was an imperial stout that tastes like fudge brownie with some booze.

Epic! After trying the Bananas Foster from Untitled Art (which was a complete mess!) I'm glad I had this beer still in my fridge. Absolutely fantastic! Everything about it is great! The 11.7% abv is very well hidden. The flavors come bursting out. The feel is great. This is on par with any ultra high end imperial stout!

Yep, fudge brownie notes in the nose, plus some vanilla & chocolate syrup.

It's sweet as hell, without much balance. If you don't have a sweet tooth, run the other way...but honestly, it's damn good if you have one!

Double Chocolate Fudge Brownie somehow recreates the exact dark chocolate baked experience. It tastes like the crispy edges of a brownie while still holding true as a stout. One of the best chocolate renditions out there.

My brother sent me a can of this beer. Thanks Brian! Sampling at cellar temp and poured the 12 oz can into my snifter.
The beer pours a jet black color with no light passing through my glass. Very fizzy tan head foams up 1 cm and very quickly fades to absolutely nothing. Looks like a glass of merlot at this point. Wish the foam had any staying power, no lattice as you may expect.
Aroma is not merlot however, with dark chocolate fudge and some brownie scents mixing with a bit of light roast and hints of vanilla. Dominant is definitely chocolate. No hint of any hops and also ABV is hidden well.
The first sip reveals a medium body with sort of slick mouthfeel and fine tingly carbonation. The bubbles foam up when I swish the beer in my mouth.
Flavor starts with lots of chocolate, milk and sweet variety. Some baked brownie dough notes, and a bit of vanilla in background. Here the booze does come through with a little warming on the finish, but doesnt taste bitey or spicy. No hops anywhere in the beer that I pick up.
This is a big chocolate lovers beer and drinks pretty easy for a bigger ABV. Definitely glad to have tried this one.

A: The beer is essentially jet black in color. It poured with a short light tan colored head that left a narrow collar around the edge of the glass.
S: Moderate to strong aromas of chocolate fudge are present in the nose.
T: The taste is very chocolatey and has lots of fudge-type of flavors.
M: It feels light- to medium-bodied and very smooth and frothy on the palate with a moderate amount of carbonation.
O: This stout has lots of fudge flavors and seems like a liquid equivalent of fudge.

Poured a black body with minimal head and no lace. Aroma reminded me of opening the oven as a kid when your mom made brownies (Duncan Hines mix). Boozy taste on finish lets you know you're drinking a boozy beer, but other than that this beer is basically a heavy, sticky, chocolate treat and is real good (provided you are drinking one and only one).