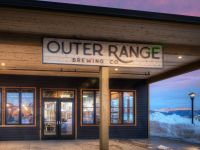 A nice place close to I-70 in Frisco. Small area inside but a nice sized patio out back. Quality of beer is fine, but the selection is scant...unless you like a variety IPAs. Maybe that's their thing and that's fine. Just doesn't help their "selection" score. Didn't see a crowler thingy and it was too busy for me to ask (at least, I didn't feel comfortable taking the time). Will be back, for sure.

Stopped by on a Monday, late afternoon with a few friends. The place had a good crowd, but we were still able to get seats at the bar. A relatively small place, but a super casual vibe. Bartenders were friendly and attentive. Many patrons brought their kids and dogs. The beer selection was heavily weighted toward IPAs & DIPAs, but they also had a Belgian double and a couple of excellent farmhouse /saisons on tap. Each IPA /DIPA was distinguished by the hops as listed on the blackboard menu. Each one I tried was uniquely good to excellent. I would certainly recommend making this a must stop place when visiting Summit County.

i finally made it in here to try some of these much acclaimed beers, and it really is worth the trip up from denver. they place is small, really small. with much of their room occupied by brewing equipment rather than taproom seating. there is a small bar right when you walk in with a chalkboard menu, and seating for 20 or 30 people in the space there, thats about it, any more and its crowded. a little outside space for the summer, a food truck, and some of the most talked about beers in colorado now. i was amazed at the selection, more than ten beers on, most of which are hazy ipa and pale types, but with a few really tasty belgian styles mixed in as well, which really impressed me. you really cant go wrong on the beer here, but we loved the way down ipa and the in the deep steep that they had on, i reckon those would stack up against any of the famous east coast juicy ipa types. the far friends belgian dark was also really nice, but for me, its about the hoppy stuff in here, and all of its awesome. i hear the dude responsible for the beer came from other half, which would make a lot of sense with this type of ipa. the quality is just as good too. a bit loud and cramped in here on a weekend, but its still a must stop if you are in the area. its only a matter of time before these beers are ungettable. good service, cool folks, righteous liquid!

ORB is a new, chill taproom and brewery located in Frisco, Colorado. IPAs and Belgian styles on the menu with a emphasis on the Hazy IPA. Head brewer (Lee Cleghorn) apprenticed at The Other Half in Brooklyn, NY prior to opening his first brewery. The atmosphere is mellow and fun, BYO food as well as dog friendly establishment. New patio is open and sunny with lots of seating and great views! A must stop if passing through the high country!!

I really enjoyed an evening with friends at Outer Range. Seems to be a relatively new place in the Whole Foods shopping center. As of my visit, they only do IPAs and Belgians. The IPAs are good IMO, and the Belgians are excellent. The owner and barkeeps are all super cool. I have a feeling this place is going to do very well.

V-Outer Range is located in the new Basecamp, strip-mall-ish commercial development near the Whole Foods in Frisco. The space inside is pretty small with maybe ten bar seats and a few tables. Style is industrial and the brewing equipment is visible among the wood and metal furniture. Not terribly warm or welcoming, but not awful. The place was mellow when I visited on a snowy Friday afternoon with a few Front Range folks like me having a beer.

Q-I have to say that I only tried one beer, but I liked it. I also give Outer Range props for using a fancy growler filling system that filled the growler to top and avoided foamy, flat beer when I opened it up later that evening.

Ser-The bartenders knew their beers. They could talk hops and they pulled proper pours into appropriate glasses. Plus the growler-fill thing noted above was cool. Service could have been a bit more prompt and friendly, but I'll take knowledgeable service over a friendly idiot.

Sel-The tap list is where Outer Range comes up a bit short. The list when I visited was maybe five beers, which is OK, but four out of the five beers on offer were IPAs (or IIPAs) and the other beer was a saison. Not a single dark beer in the joint. In January. In the mountains. Odd. Maybe I caught them on a off day.

F-No food from what I could tell.

O-I want to head back to Outer Range to try more beer since the one beer I had was pretty tasty and I enjoyed the knowledgeable service. Hopefully, they will expand their tap list and keep up the good work.