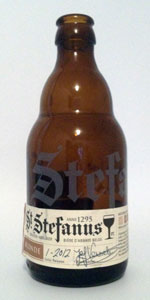 I tried this beer at the Shiroz On The Lake Restaurant in Bloomingdale, IL. It is part of the Hilton's Indian Lakes Resort complex. It was the only beer on their unimpressive beer list that I hadn't had before so I decided to try it. A bit pricey at $8.50 for a 12oz squatty brown bottle, but this is after all, a Hilton. I was impressed with the hand written bottled on date and signature on the front label, but the bottled on date concerned me a bit. It said the beer was released in April of 2012 and it is now August of 2015, so I hope this is one of those beers that gets better with age and not one that's been sitting in their cellar because they don't sell that many.

The beer poured a hazy gold color with a 1-finger white head. The head dissipated in about 45 seconds but it did leave some decent lacing.

The beer had a strong Belgian yeast smell to it followed by some sweet malts and tropical fruit.

The flavor starts out with some sweet malt followed by a variety of fruits - banana, orange, tangerine, pear, and apple. The next layer has Belgian yeast in it along with some spices. My best guess is clove and coriander. The alcohol is also well hidden for a 7.0% abv beer.

Medium bodied with high carbonation, which makes it crisp and refreshing.

This is a well made Belgian ale. My only question is why does it say BLONDE on the label? This isn't a blonde ale at all.

Could be a blonde with some tripel aspirations. Very good look, aroma, and head. A little dry in the taste department. While not mind-bendingly good, it is an extremely good blonde. The packaging and price set up higher expectations, but if you put this in a Leffe bottle your jaw would drop. Very nice. Will keep an eye on this brewer and importer.

Certainly pleasant, but seemed to lose flavor the longer it sat. Didn't quite live up to my expectations.

Been drinking it 6 months old (3 matured in factory, 3 in bottle afterwards). The taste is pretty complex, so I guess it is recommended to wait even more, as advertised on the bottle. It has an intense yeast taste.

Sampled from a 750ml bottle in a Duvel glass. Like a few before me, I picked one up for $3.99 at Triangle Wine (and then went back for a couple more).

A - Golden and clear with a fluffy white head that sticks around for a while. A nice steady rise of bubbles from the center of the glass. Great lacing! Very inviting.

T - Crisp and dry with a nice fruity / spicy balance and the slightest hint of sweetness in the finish.

M - A moderate consistency but feels light due to the high carbonation.

A - An audibly fizzy active pour that yields three plus fingers worth of airy crisp off-white colored head comprised of huge chunky bubbles... Decent retention gives way to a fluffy delectable frothy lacing and moderate to thick collar... A light to moderate bit of carbonation which is a mix of sluggish and rapid... There is a slight haziness that lingers in this pale gold colored offering... A slight bit of lacing clings to the glass...

T - A mix of over ripened sweet fruits... Apple... Pears... Banana... White grapes... Golden Raisins... Apricot... Peaches... Tangerine... There is also some very subtle Belgian yeast component mixed with a slight spiciness... Some rich doughy undertones... A very light bitter astringency on the finish that lingers for a bit...

D - A very nice Belgian Strong Pale Ale... I would gladly revisit and can recommend without hesitation... I only wish this one were a bit more widely available... Lots of character and depth in every facets... Truly enjoyable...

L: Clear orange color, gives of a medium top of head that disolves rather quickly, Lacings on the glas is decent

T&F: fruits, toast, malt sweetness , hop bitterness in the finishing,,i think the flavour was very good balanced, very fruity taste on it. much of the aroma is also to find in the flavour..Not to sweet and not to bitter highly carbonated, very drinkable.

O: I was suprised over how fresh and enjoyable this beer was . I sure would trie this one again. Very good taste and flavours on this beer. I would like seek out more beers fro brouwerij Van Steenberge

750 ml caged and corked bottle of this "blonde ale" served in a Porter Bar goblet. Bottling date of 7-2012.

Clear copper-amber body with a fizzy head that has limited retention and leaves very little lacing.

The aroma (approaches 4) is notably malt dominant for style, but with fruit and spice notes.

The flavor is yeasty and fruity, like most blondes, and seems to be just marginally more malty/bready than average. It is also a bit less spicy than the average blonde.

Lively carbonation in a near medium body.

Cellar release May 2015, brewed February 2015, and consumed October 2015, therefore 8 months of maturity at time of consumption.

According to the explanation on the bottle, the profile at 8 months is expected to be approximately half way between fresh/fruity and complex/aromatic. I used a St Stefanus goblet.

I can confirm this is a great beer, which reminds me of Chimay Grand Reserve although St Stefanus has rice as one of the ingredients, which seems odd.

This is my first ever review. I hope it helps.

I purchased the 33cl bottle in my local mall here in northern France do.

Poured into a St Feuillien chalice, pouring a massive head fading faster than Duvel and the likes.

Overall this is a great beer that I'd purchase again since it's fairly available for us lucky to live south of Belgium, cheers!

Slightly aromatic. Clove and touches of coriander. Mild citrus and banana. Malt is evident but not overpowering.

A solid beer but it does not live up to my expectations. Good flavour but it doesn't shine in any particular way.