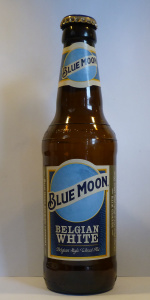 Reviewed by hbeimers from Illinois

Rated by dhd1491 from Georgia

Reviewed by Jeez from Massachusetts

3.5/5  rDev +2.3%
look: 3.5 | smell: 3.5 | taste: 3.5 | feel: 3.5 | overall: 3.5
Anyone who buys beer for social events knows that there are two choices: dirt cheap light beers that you drink not to enjoy, but to "crush", and higher quality inexpensive beers that still might not taste good, but leave your guests with the impression that you give at least half a damn about them. Blue Moon and its derivatives fall into the second category. This one, being the flagship beer of Blue Moon (read: Coors+), can be found in anywhere there is running water and electricity. I admit I've never smelled it because I don't want to be the guy at the party who freakin' smells a beer. The taste is mild wheat with a touch of sweetness. If I close my eyes and use my imagination I can make some citrus and spice appear. Not much besides breadiness, but it is a good breadiness. There is no industrial quality to it that you typically get from mass-produced beers. No complaints about the carbonation or mouthfeel. I might even say that I enjoyed it (a bit). Of all the wheat beers I've had, this is certainly one of them. It's hard to feel enthusiasm for a common wheat beer (it would be like getting excited over sliced bread), but for what it's worth, this is one of the better macrobrews.
Jun 21, 2022
Rated: 4.25 by ebnpt from Rhode Island

Reviewed by bw2000 from Texas

S - Citrus scent is font and center. I get a juicy scent as well. A little light grain malt. Sweetness on the back end.

T - Taste is much more subdued and less in-your-face citrus. The citrus scent is balanced out with the light hop flavors. Mild grain malts.

O - Overall this is an enjoyable beer. It’s no wonder Blue Moon is so popular. To me this is one of the better beers for enjoying outdoors. Very refreshing, but has more to it than other macrobrews. I’ve somehow avoided this one for years, but I think this will be added to my summer and camping beer rotation.

L - Hazy goldenrod, with a quick-to-dissipate two-finger pale white head.
S - Faint orange peel. Hinting at some sort of spice. Wheat.
T - First off, crazy well-balanced! Starts off on a chewy wheat note, and continues to a coriander finish. Notes of very light caramel throughout.
F - Smooth. Oily on the finish. Medium-light body, with medium carbonation. Chewy. Easy-to-drink, and refreshing.
O - Not bad. Not the first time I've had this, either. This is probably the tastiest beer you could bring to a party and not look like a douche. A great lunch beer. It's everywhere beer is sold, too - so bonus points for that. I'll definitely buy this again, but I won't really go out of my way for this. It's my go-to for beer runs and BBQ parties.

3.84/5  rDev +12.3%
look: 4 | smell: 4.25 | taste: 3.5 | feel: 3.75 | overall: 4
Pours well with a small head of foam. The head dissipates rather quickly, and leaves very little lacing. The color is a darker orange with a cloudy haze. The aroma is certainly sweet with hints of fruitiness and very little hoppy aroma. The taste compared to the aroma is less sweet, with caramel grainy flavors and hints of citrus. An enjoyable brew, but I find the look and smell promise more than the flavor supplies. The flavor I would typically associate with Belgian style ales is not present with very little phenolic flavor.
Feb 19, 2022
Rated: 3.75 by ryand14 from Michigan