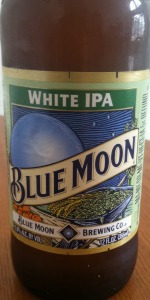 Notes: A crisp, refreshing White IPA crafted with four varieties of hops, wheat, coriander, and a hint of orange peel.

For our unfiltered White IPA, we complimented the citrus hop character with wheat and a hint of orange peel. Then we dry-hopped it with Cascade, Citra, and Huell Melon hops for a bright hop aroma that creates a balanced IPA.

Pours a familiar golden yellow color, but with a significant amount of haze, looks like they not only used oats and wheat, but also kept it unfiltered. Perhaps more taste will come of this turbid looking beer with 1/2" white head. The aroma didn't exactly pop hard for the Citra (or Huell Melon) hop. It was more citrus rind, more evocative of the Cascade hop moreso than Citra.

Anyways, the taste definitely was more bitter than regular blue moon, so it seems like the Simcoe is doing its thing beyond the Cascade bitterness. Even with the wheat and oat contribution to the body, it just seemed like it was an amped up bitterness kind of blue moon wit without doing much to push the flavor from the hops along. Like they went 97% bittering hops and sprinkled some Huell Melon and Citra along to simply mention they used those hops as a marketing angle. Didn't have any off flavors or reason to hate the beer, but its just like a triple bitterness Blue Moon OG beer at the end of the day.

Rated by CreedeSon from Illinois

Reviewed by Stockatron from Australia

Reviewed by secondtooth from Indiana

Taste: More orange and some slight bitter but fairly juicy hops. Nod of bitter at finish. Not a bad IPA, but really very much an average and pretty forgettable one.

Reviewed by ArchimedesSox from Georgia

S: Not much of anything, maybe a little hop

O: Not much going on. It drinks well and has a little flavor to it which for me gives it a place among the lawnmower beers but not gonna win any awards.

Reviewed by Ob512316 from Pennsylvania

From the bottle: "Brewed With Four Varieties of Hops".

At last, vindication! I despise bottles & I deeply loathe screwed-up screw-top bottles. With each previous offering, I have had to hold my seething anger in check, but since this one is an "unfiltered White IPA", it was fair game for an aggro pour. This raised two fingers of dense, creamy, rocky, off-white head with great retention. Hallelujah! Color was a cloudy Golden-Amber (SRM = > 5, < 7). Nose had a nice hoppy bitterness, primarily of grapefruit citrus, but I also caught a whiff of cool, minty pine in there. Mouthfeel was medium. The taste was very much of grapefruit, but that was about it. Four varieties of hops?!? What happened to anything but Citra? Cascade for aroma? Okay, but I wasn't getting the entire picture, no matter how hard I tried. Finish was dry and bitter and while it was an okay AIPA, it seemed kind of one-dimensional. YMMV.

I have become fortunate (?) enough to live long enough for a dream to come true. CANned beers are now MUCH more CANveted than their bottled CANterparts! Now, nearly everything is CANned, while bottles are scarce. OMFG. I beCAN the CANQuest (tm) in CANger, in response to a pooh-poohing of craft beer in CANs & now, I am overwhelmed! Today is Su, 09 Aug 2020 & it is time for a CAN re-review.

From the CAN: "Blue Moon Brewing Company * Est. 1995"; "Brewed With Four Varieties of Hops[.] For our unfiltered White IPA, we complimented the citrus hop character with wheat and a hint of orange peel. Then we dry-hopped it with Cascade, Citra, and Huell Melon hops for a bright hop aroma. Hoppy. Unfiltered. Balanced."

All good to know, especially the latter two. The former meant that I CAN CANduct an inverted aggro Glug without impunity & the latter might explain why I felt it was kind of bland on my original, initial review. Once I CANpleted my initial Glug, I was faced with two-plus fingers of dense, foamy, rocky, bone-white head with very good retention. Color was a hazy Golden-Amber (SRM = > 5, < 7). Nose smelled strongly of pine with just a hint of CANtaloupe and lemon. Hmm. Mouthfeel was medium. The taste was nice - pine, grapefruit, lemon & a bit of CANtaloupe, but all rather muted, as though they were afraid that too many IBUs might be off-putting for the typical Blue Moon CANsumer. 8=( These are enlightened IPA times, fellas! Most beer drinkers know what to expect in the style. Don't hold back! Finish was semi-dry, but I was left feeling unfulfilled. This had real potential & I think that with some tweaking, it could be a really good beer. As it stands, in its current iteration, it is kind of mediocre. YMMV.

Reviewed by monkbrewed from Michigan

Reviewed by bg19 from Tennessee

Reviewed by D1noB from Oklahoma

Taste Rating in Words: It's like eating green beans for your main course.

Reviewed by mattlerjor from Michigan