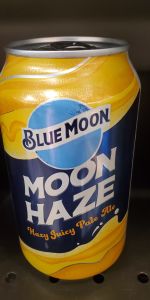 Notes: Unlike Blue Moon's flagship Blue Moon Belgian White, which is a wheat beer, Moon Haze is the first, nationally-released pale ale from Blue Moon Brewing Company. Moon Haze has a juicy orange, tropical, coconut taste, an aroma of heavy citrus tropical with notes of orange, pineapple, mango, a whisper of coconut, and a smooth taste with a touch of bitterness to finish.
View: Beers | Place Reviews
Reviews: 7 | Ratings: 12 | Log in to view all ratings and sort

Pours a hazy golden honey color with two and a half fingers of soft head. The head is white in color and as the bubbles start to release themselves the head went down to a foamy finger of head with large bubbles. Lots of glass lacing.

Smell is bitter citrus up front. Bread crust and a hint of pine. Smells hoppy.

Taste up front is sort of blue moon like but than the bitterness of the citrus kicks in. Its a pith and orange rind bitterness that imparts the taste of orange and makes a nice balance with a good malt bill.

Mouth feel is close to a medium but stays in the lighter category with the rather nice finish. The pith and rind bitterness does linger just a tad on the back end.

Overall I like this beer. It is like a different version of the original Blue Moon. Some of the same characters are playing here but now we have a nice hop presence added. I think this is nice if you want a Blue Moon but with a little extra to it. Not saying the two beers are that close just familiar friends. I like this addition to the family. Welcome home Moon Haze.

hazy pale here, totally unexpected from blue moon, but maybe it shouldnt be, they have always made cool beers outside of the stuff everyone knows, their little spot at the baseball field, always something fun on, and they have been no stranger to hoppy stuff, even if it never gets national play until now. this is decent but i honestly had higher hopes for it. it drinks heavy for what it is, already tastes a little faded even though it just came out, and is generic in terms of its hop profile, somewhat of a shame really. it smells fine, orange and generic citrus at the same time, a little honey sweetness from the malt coming through too, definitely a little northwestern hop bite as well, surprising in a hazy but not disagreeable. i wish they said what the hops were. in the flavor i get a little mango and peach, but thats reaching, its not all that interesting, and there is more weight from the grain than it needs, really drags this down despite it being relatively dry and very nicely carbonated, i didnt want a second can. not bad, im perhaps underselling it, and it may serve to bring normal blue moon drinkers into the hoppy beer fold, although i guess there isnt a ton of crossover or commonalities between the two beers. maybe a light yeast element on the finish as it warms, also not unpleasant but maybe a little out of place. this could be refined a bit in my opinion, but decent overall. neat to have a national player at this level venture into the hazy space, if anyone had doubts about the style being here to stay, its time to put those to bed...

Moon Haze has a very thick, spongy, white head, with a bubbly, hazy gold appearance and clinging, thick lacing. The aroma is of strong orange and background white wheat. The flavor is similar, with overriding citrus bitterness. This is rather sweet. Moon Haze has a high-medium body and a dry finish.

12oz can. Poured out a hazy, golden orange color with a small, off-white head of foam. It left minimal lacing on the glass. It smelled of orange, pineapple and sweet toasted bread. Tasted of sweet citrus, toffee, caramel and a mild, resin bitterness.

This is absolutely insulting to the style. Taste is like...rotten tea leaves? That's the best way I can come up with. Like this was somehow worse than I was already imagining. I'm just a guy obviously but I think this should be revamped immediately