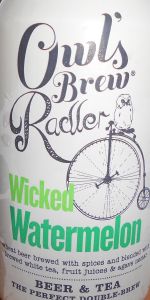 Look: It pours hazy yellow with a white head. Head retention is good.

Smell: It has aromas of lime, spices, white grape and citrus.

Taste: It is very sweet with the first sip and the white grape almost champagne like flavor is the first impression. There is some background spiciness and very low lime. There is a low background element that is from the agave that reminds me of tequila.

Feel: It is very light and crisp.

L: Poured from a can to a pint glass. Had a medium brown color and a cloudy, murky consistency. Some sediment. There was a small amount of foamy head that quickly dissipated. Below average lacing.

S: An odd aroma of tea, watermelon, citrus, a little malt, and a grainy quality.

T: Tasted of a fair amount of citrus fruit (lemon, in particular), a bit of the aforementioned grainy quality, a lot of herbal tea, light malt notes, and a tinge of watermelon. Definitely one of the stranger flavors I've tried. The tea and fruit elements don't seem to mesh well, leaving you with a thin brew that doesn't really favor either element.

F: An average amount of carbonation with a thin finish. Light-bodied.

O: I drank this beer more out of curiosity than anything else. It's not terrible, but it doesn't necessarily seem to work 100%.

At last, it is here again! What am I referring to? Why, #WatermelonWednesday of course! It is CANpletely unsanctioned, but I like to drink a watermelon beer of some stripe on Wednesdays as my way of saying "Bump the Hump!" It does not hurt that this week's entry also doubles as an entry in The CANQuest (tm).

From the CAN: "Wheat beer brewed with spices and blended with brewed white tea, fruit juices & agave nectar"; "Beer & Tea [-] The Perfect Double-Brew"; "*Drink Wise*"; "Why the Owl? We say Drink Wise and we brew with only whole, real ingredients. When do we add artificial flavors? Ummm ... NEVER! So bottom's up - you're holding the good stuff."; "Do us a solid and fill in the blank: I drink @theowlbrew when I ___________." My blank would read: "... think of my late Pops, an avid bicyclist who also had an affinity for owls."; "What the Hoot is a Radler? When we first batched up our refreshing double-brew we were amazed by its robust & eminently quaffable flavor. We imagined people imbibing our summer breeze of a beverage. We thought of outdoor concerts ... days on boats ... and those wintry hours when all you want to do is sip some sunshine. Then we remembered the Radler, a beer style invented in 1922 for cyclists: a bold flavor but easy enough that following a tipple, the bikers didn't topple. Our perium blend is an homage to inventor Franz Kugler's flavorful and sessionable vision. So, there you go - a tot of tea, a ration of beer and a dash of history. Keep On Riding ..."

I Crack!ed the CAN open & since it was a wheat beer with adjuncts, I felt empowered to give it an inverted Glug. This really worked out well as it formed two-plus fingers of dense, foamy, pinkish-white head with great retention. Color was an absolutely cloudy Amber (SRM = > 7, < 9). Nose had an intense herbal tea quality, much like my pot of tea with Saturday's monthly chicken Pho special at the Noodle King, along with a faint watermelon scent. Mmm. Mouthfeel was medium, but solid for a Radler. The taste was unquestionably watermelon, faintly sweet, but also with a distinct tea-like flavor as well as a light tartness that may have been lemon, but which could also have been the agave. Finish was semi-dry & highly refreshing with a lingering watermelon flavor. I was very impressed by this beer, especially the way it retained the watermelon flavor throughout. It's low ABV makes it both crushable & sessionable & I would certainly take some CANs out for a bike ride. Pops would have approved.

A thanks to the commander of the canquest, woodychandler, for this beer. Poured from a 12 oz. can. Has a very cloudy dark golden/copper color with a 1/2 inch head. Smell is mild, sour, some watermelon. Taste is nothing like the aroma. Lots of watermelon, tea, highly refreshing. Feels medium/full bodied in the mouth and overall is a beer that I could easily crush many of on a hot day.

Poured into a tulip: color is a funky hazy pinkish orange, not much head but unique presentation.

Taste is woah - big fruit component, not much beer quality, watermelon is feint and more of citrus like flavor. Way more fruity than i expected, I'm not going to be able to finish it.

A: Pours a very murky medium to dark burnt golden orange in color with light to moderate amounts of active visible carbonation rising along the edges of the glass and moderate golden yellow + orange colored highlights. The beer has a two finger tall sudsy foamy tan head that quickly reduces to a large patch of thin film covering about 75% of the surface of the beer and a thin ring at the edges of the glass. Light to moderate amounts of lacing are observed.

S: Light to moderate aromas of grainy malts with light amounts of sweetness and some hints of slightly floral white tea and a hint of melon.

T: Upfront there is a light flavor of grainy malts with a slightly heavier than moderate amount of agave sweetness. That is followed by moderate flavors of floral white tea with a moderate flavor of watermelon in the finish which lingers slightly.

O: Interesting - sweet agave, generic lager, white tea, and watermelon... I wasn't sure this would work but I really enjoyed the flavor though there was not much in the aroma. Easy to drink and sessionable.

Notes via stream of consciousness: I gave this one a very rough pour to bring up a full head and it worked. Two-fingers thick worth of frothy off-white head is resting gently above a cloudy orange & brass colored body with some visible sediment supended in it. Quite a bit of it has already dropped and is laying on the bottom of the glass like sand. The aroma is a little odd, not bad, but unusual. I initially though it was minty, and then I got the tea, but the label says this is brewed with white tea and I'm smelling black tea. Well there are spices involved, and perhaps with the agave nectar I'm getting something like mint. Whoah! The flavor is intense! It's like fruit juice! It's fruity and sweet. It's not particularly like watermelon until the finish. It's delicately spiced, and I'm still thinking mint, but there might be some other stuff in there. As for the fruit juice I'm at a loss. I'm guessing at least some apple, and watermelon given that I find it in the finish. Medium-full in body with a firm sugariness. It's a little tart, and the carbonation is gently zesty on the tongue before warming to become pillowy smooth. It's really kind of stunning, but I don't get "beer" out of it, it's something else altogether. So how to review it? I just don't know.

Wicked Watermelon from Owl's Brew Radler
Beer rating: 82 out of 100 with 18 ratings