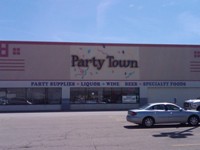 View: Place Reviews
Reviews: 41 | Ratings: 57 | Log in to view all ratings and sort
Reviews by nlmartin:

This store is located just off the highway. The building is well lite and ilse well spaced. The store seems to primarily be a liquor store. You can find all your standard liquor needs and even a few unusual top shelf items. The store has a ok selection of wine. There are many other party items available in the store.

All the things listed above make this a good stop for the nieborhood. Now lets talk about the beer. The cold case is well stocked with alot of the items from the shelf. The case is full of the normal suspects. Of course assorted 40's and BMC are readily available. The micros are full of things like Rogue, DFH, Bells and Great Lakes. The imports are fairly standard English, German and Belguim fare. There are a smattering of other oddball imports. These things would make the stop average strickly. The thing that makes the store stand out are some of the high end items available. DFH 120 minute, WWS, Olde School Barley Wine, RaisondExtra ect. The store is well stocked with Stones products. The stock guy said Double Bastard would be on the shelves in a couple days.

The staff was attentive and offered help with any questions and locating goodies on the shelves.

Now the not so good portion. Some of the items on the shelves are a bit dated. This is not a problem for some Barley Wines, Imperial Stouts, Strong Ales ect. Other items just simply will not fair that well. This is another ok beer stop in the area. Watch your best by dates!

For those that don't know, Party Town is home to Mash Cult Brewing.

Vibe: Nice people. I love that you can buy a beer (or beers) and then walk around the store, shopping and drinking. Also, I love that they have a sticker wall (which I added to).

Quality: I sampled an imperial hard seltzer that was 12% ABV. Wowie zowie! They also had a raspberry lager and a session IPA, both of which were better than average.

Service: Service was great, but the place was severely understaffed. I wonder if some people called in that day. I think they would do well to have a pour your own pint system in place.

Selection: In addition to their own taps, they had a bunch of guest taps. Lots of cool stuff. And seeing as this is also a liquor store, they had an extensive selection of craft beer, wine, cider, bourbon and mead. Everything was very reasonably priced.

Has been my go-to store for years. I go there often to find beers I have not tried yet. The staff is super nice and knowledgeable. Selection is huge, not just for beers. They have taps to try beer and take home growlers. You can pre-order kegs they don't have in stock and pick them up. In the Florence are definitely the best store, no need to drive to Newport to the other Party store.

This store is MASSIVE. While it's not all dedicated to beer, their selection is impressive. That in addition to the service and the largest selection of individual 12oz bottles I've ever seen, Party Town definitely qualifies as "world class" in my book.

For the area this place seems a bit "cheap" feeling next to some of the other big deals. So you might think negatively , but wait till you see the bombers and singles cold. Beer you'd think would be LONG gone are still on shelves, finding aged bottles happens all the time. The staff is simply amazing.

This is hands down the best "big box" liquor store I've been to. Oh and just try and start talking to the staff about what you like or options. They go way out of their way to help you out. For anyone in the greatest Cincinnati area or norther Kentucky, you just don't find something better.

Found this store in Beer Advocate while working in the area. Great selection of craft beer chilled and not chilled. They also have a great selection of bomber bottles. There is a good selection of single 12 oz. bottles so you can try one without buying a 4 or 6 pack.
There are several taps at the front of the store where you drink by the pint or get your growler filled.
It's like a party supply store with a great beer selection. I did notice a large selection of ciders, wine and liquor.

While smaller overall than several other local stores, with less of a bottle and keg selection, Party Town has one majpr, major wow factor going for it: the growler station.

Two dozen taps, continually rotating, pouring everything from pint jars to full gallons at reasonable prices, staffed by beer geeks who love to talk beer with you when there isn't a line at the station (or even when there is, if everyone's into the conversation).

On top of that, this place hosts events at least weekly. Tap takeovers, tastings where brewers come in and set up, Friday Night Flights - there's almost always some sort of beer event going on, usually for something like $3 to $5 for six tasters with more available as desired.

Slap on a good array of liquor also available, and you've got a nifty little place.

Highly impressed by the selection down at the Party Store, the front of the building in a shopping outlet in Florence, KY does nothing to warn you about the incredible selection of wine, beer, cigars, obscure hot sauces, party supplies that this store has to offer definitely a one stop shopping experience. Beer coolers with singles that need to be kept cold, kegs galore, sixers and 12 packs in the walk in cooler, grocery store like aisles of beer. I found the house beer guy, who shares the namesake of one of my first cousins...Jeff Metz. He gave me awesome beer advice, and access to some of his cellared jewels. I left with a Goose Island Bourbon County Stout, a vertical of Avery the Beast, the Beer Geek Brunch Weasel, and my first go around Pretty Things, Prairie wild ales, Cincy based Rivertown sour ales, a couple growlers special one offs from Dark Horse and Against the Grain. Awesome beer experience!!! Great prices stop in if your into all things to induce partying.

I go here every week. They have a great mix and match section, great homebrew supplies aisle, the 18 taps growler fill station selection changes almost every week, weekly beer tastings for $2, they have lots of glassware, and every employee I've talked to has been very friendly and informative.

My only gripes are that when compared to the other places I go, everything is a little bit pricier at Party Town, and they skip some major beer releases like Enjoy By.