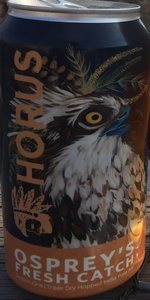 Notes: We are excited to share this modern take on our gold medal-winning IPA recipe. With five pounds of hops per BBL, bright aroamas and flavors of mango, apricot and watermelon will dazzle your palate. We hope you enjoy this smooth and ridiculously drinkable IPA as much as we do!
View: Beers | Place Reviews
Reviews: 26 | Ratings: 77 | Log in to view all ratings and sort
Reviews by Tennisballa07:

Cloudy light yellow color. Light tropical fruit notes, but a very light IPA. No complex flavor at all, tastes watered down. Definitely not worth the $4+ per can retail.

Aroma is sharp with rich pineapple and mango notes with a earthy back-scent to it and a little lemon too.

Taste is very hoppy and punchy with a some tanginess. Malt is low and bitterness is low to moderate.

This is a great NEIPA full of flavor to the max. A little more tangy than I prefer but still very well done.

Lots of head and lacing -- slightly cloudy but still some clearness to it too. Nose is piney and fruity, tastes very crushable notes of tropical mixed with a little dank taste, goes down easy with slightly more carbonation than expected.

A super balanced IPA in my opinion. Seasons one and two taste very similar, although slightly different. This is a more malt-forward IPA with some sweet and almost tangy hops. It has a good dash of pine in the nose and mouth. Overall super solid! Wish it wasn't so expensive, sometimes 4+ USD per pint.

First of all, if anyone wants to have this re-categorized as an NE IPA, they got my vote. (A Site Editor has already passed muster on this by default as an AIPA, so I won't fuss... but this is the new style to me.)

My can notes hops differently than at least two other reviews: Citra, Mosaic and Loral. But experimenting is good !
Also, my can was brewed in Waunakee, WI. FYI... and it was just delivered from the Illinois distributor.

While it has a pretty good head, Osprey's Fresh Catch is not particularly good Looking after it settles. But the Smells are exhilarating; filling my nostrils with grapefruit while other tropical fruits have to act demur. Tastes are the same, but the grapefruit rind takes over and, while nicely dry, puts a damper on the after-taste. Still... Refreshing. Achieves its goals.

My first from Horus, I went on their website and it was extremely cryptic. No pull-down menu for beers. Nothing personal about who started Horus or when. I get the impression (confirmed on a quick review of their list of beers on BA) that they specialize in barrel-aged ales, but that they make their money on Osprey and a stout. But, Osprey is good and that is what counts.

Pours cloudy straw-gold with a moderate head and minimal retention. Candied tropicals in the nose with peach, melon, and grapefruit. Medium bodied with a creamy, soft mouthfeel. Sugar-dusted peach, with pineapple and tangerine on the palate. Zero malt with a minimal bitterness. Finishes fairly dry with lingering citrus.

Nice beer but there are better options out there to this $5.00 single.

The flavor is more malty with a good creamy touch. The hop is subdued, almost sweet. The body leans rich with a higher carbonation. The finish is hoppy but not bitter. Overall, I get a very easy to drink, well-blended IPA.

A: The beer is very hazy to cloudy yellow in color. It poured with a half finger high white head that died down, leaving a collar around the edge of the glass and some lacing down the sides.
S: Light aromas of pineapples and mango are present in the nose.
T: The taste follows the smell, having stronger flavors of pineapples along with notes of mango and hints of grapefruit. A light amount of bitterness is perceptible.
M: It feels medium-bodied, a little juicy, and surprisingly smooth on the palate with a moderate amount of carbonation.
O: The taste of this beer has a nice blend of tropical and citrusy flavors. It's almost like a smoother version of a New England IPA.

A: Very hazy honeycomb with 1-finger of frothy off-white head with average retention and spotty lacing.

S: A lot of herbal, dank aromas but fades to more berry, orange and lime citrus, and melon and berry. A bit muddled with nothing striking a dominant chord.

T: Flavor is also a bit muddled with sweet berry and melon flavors fading to some lime and orange citrus. Malt doesn’t provide much additional flavor components. Bitterness is low-medium at most.

M: Smooth and easy to drink with low carbonation and soft, medium body.

O: DIsappointing for sure — I would try them again but only in a fresher can.