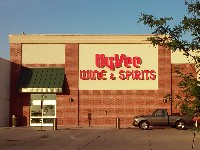 View: Place Reviews
Reviews: 3 | Ratings: 4 | Log in to view all ratings and sort
Reviews by Jinx989:

Self-contained beer/wine/spirits shop adjoining the grocery store. Clean, spacious, and well lighted, with a tasting room and a huge refrigerated "beer cave." Good selection of craft brews, nearly all of which are kept refrigerated. In addition, this store has the largest mix-a-six section I've ever seen. Several coolers full of individually-priced singles including domestic and imported beers, ciders, alco-pops, and kombucha. Lots of locals and Illinois-brewed beers, I stopped in as an afterthought and I'm glad I didn't pass it up. Be sure to check it out if you're in the area.

The liquor store is on the far left side of the building with it's own separate entrance, on the opposite end of the shopping center from Binnys. Makes an easy 1-2 stop if you're hunting for specific beers.

The store was clean and well lit, the majority of the beers were in coolers and there was a walk in beer cave with aisles of beer. Strangely there were some beers in cases on the back top shelf that weren't stocked elsewhere. I think maybe they were just slow to restock shelves after a busy weekend. The clerk was helpful and answered a couple questions, but the staff on the floor seemed to dodge customers.

Selection was good, a ton of singles but not a ton of seasonals. I lost interest halfway through, there were several hundred. I was looking for central IL stuff and there was a fair amount, but a much deeper selection at Binnys. Some Tryptych, 4204 Main St., and an overabundance of Destihl on a huge endcap. Noticed Surly, Prairie, Half Acre, Metropolitan, and more. Picked up some Dank Meme and Here Be Dragons.

Market Grille is a restaurant and bar on the right side of the store and has a decent selection of craft drafts, but we passed this time.

Typical Hyvee wine and spirits section of the store walled off but accessible from the main store and through a separate entrance. Pretty much all the beer (except for a few things kept behind the counter) are in cold storage/cases! Very nice. The downside? So many of these beers are old - especially the IPAs. So while the cold storage helps them keep longer, they're still pretty old. Service was fine, nothing special - friendly at the cash register, but no help when I was looking around. Selection was quite expansive and thorough in the craft and domestic side of things. Imports were a bit thinner - mostly it was macro imports with a few Belgians, but overall a very solid selection.

Yea, its in a grocery store, but Im not reviewing food ... dunno why thats on here.

Hy-Vee Wine & Spirits and Market Grille in Bloomington, IL
Place rating: 4.11 out of 5 with 4 ratings