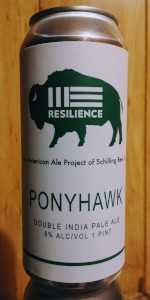 Notes: Huge waves of grass, pine and citrus coat the palate as the Simcoe, Mosaic and Galaxy hops do their work.
View: Beers
Reviews: 20 | Ratings: 61 | Log in to view all ratings and sort
Reviews by Abbott:

Pours a fairly hazy but slightly translucent sunny pale orange, with barely a finger of loose white head that slowly settles to a decent film and collar, leaving very minimal lacing. Some visible effervescence streams, and effervescence is also apparent from the nature of the foam.

Palate: The flavours unfold identically to the way the aroma does. Quick burst of pineapple and sweet orange, with the horned melon and kiwi coming in strong and setting up the dominant profile. Unripe guava, lychee, fresh cut grass, and blue raspberry lead way to a peak, before falling back, leaving the fresh grassiness behind, with grapefruit pith that becomes firm and biting for a moment, before quickly drying out, leaving a lingering bitterness over the palate with no clear intent to vanish anytime soon. Slow fade. The grist base feels clean, soft, slightly grainy, minimally toasty, with a very clean, thin sweetness that never fully develops, keeping the beer on the drier, crisp side, with zero grungy, gritty, or yeasty flavours present. Hops are clearly used both in the boil, and then later, dry-hopped. Clean.

Mouthfeel/Body: Full bodied, revealing some of that 8% ABV, smooth, yet quite crisp, with a surprisingly lively effervescence for the ales heft. Some quick sugary sweetness immediately upon sipping, before turning bright, slightly acidic in a juice-like way, and then drying out, eventually leaving a prominent pithy, clingy drying bitterness in the finish. Well rounded and even.

Overall: This is just a great beer. It stands out against much of the white noise found in many modern hoppy beers. It has the ultra juicy tropical nature that appeals to many, while retaining some more traditional characteristics that are only achieved by using hops in boil, which many modern hoppy beers attempt to avoid at all costs, for reasons. It also has complexity and nuance, with some very unique, exotic tropical fruit notes (that very accurately mimick the real fruits), before finishing with a classically bitter, pithy, hoppy finish. Impressive effervescence accentuates the acidity and brightness, and really lifts the beer up. This is just a must-try double IPA, and a really good example to set for its fellow small New England breweries. Well done. One to seek out.

16 oz can into chalice. Dated 6/28/19, I think.
Look is nice golden yellow with orange touch. Smell is tropical with citrus. Taste follows nose and nice juicy notes. Feel is medium and creamy. Overall a very nice DIPA that I would definitely drink again.

A- A hazy golden orange with a two finger white head.

The appearance is a hazy, murky looking yellow-amber with a modest soft white head. Looks like a NEIPA.

The mouthfeel is better than medium and smooth.

The taste is juicy and bitter with a lingering finish.

Taste follows tropical front to back guava, apricot, mandarin, pineapple, and a healthy shot of grapefruit lingers on the tongue after every sip. 4.5

Mouthfeel is big, nice soft feel on the tongue, sticky but not dry, and at 8% goes down easy but is full of flavor! 4.75

Overall I went in with massive expectations and it lived up to what I was hoping for. Schilling Beer Co. well done. 4.5

Pours a light hazy straw color. There is a blast of fruity goodness commingled with hops on the nose. The flavor is a big let down compared to the nose. There's some fruit but nothing on the level of the nose's promise. There is also an odd tart note. Sure enough, there is a decent hoppiness on the finish, but that is not enough to redeem this offering.

Can from Candia Rd
Hazy dark golden in color with a rich frothy white head that persists. Earthy citrus and tropical fruitiness backed up by sweet bready maltiness.

Clean pale malt start. The hop is present and subtle. I get mostly cream to the nose.

The flavor is like an APA without any element being too dominant. The body leans to the thin side but the carbonation is low enough to make this work. The flavor start off as rich (pale) malt. The hop kicks in but doesn't dominate, leaving the aftertaste to be moderately long.

A: The beer is hazy yellow in color. It poured with a quarter finger high off white head that left a collar around the edge and some lacing down the sides of the glass.
S: Light to moderate aromas of grapefruit rinds are present in the nose along with hints of orange citrus.
T: The taste follows the smell, having flavors of orange citrus along with hints of passionfruit. No bitterness is perceptible.
M: It feels medium-bodied on the palate and has a moderate amount of carbonation.
O: This IPA is easy to drink and seems to be a little denser on the mouthfeel compared to other beers in the style.

Poured from a 32 oz crowler into a tulip glass.

Pours a cloudy golden orange color with 2 fingers of soapy off-white head. The head leaves a ton of clingy lacing as it settles into a thick foam.

The aroma brings notes of overripe mangoes, papaya, and grapefruit with some hints of pineapple, orange rind, and pine.

The flavor has a lot of citrus, namely grapefruit and orange, backed up by a solid biscuity, caramel malt and a huge wave of pine. Very earthy finish, like chewing on grass.

The feel is medium bodied with pretty good carbonation. Very sticky and dry.

Overall, a very good DIPA that packs a good amount of flavor and aroma. A nicely balanced beer that fits both New England and West Coast styles.