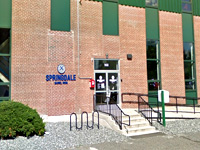 Rated by Patches826 from Massachusetts

4.28/5  rDev +0.5%
vibe: 4 | quality: 4 | service: 4.5 | selection: 4.5
Open converted warehouse space with barrels full of goodness yet to come. Industrial vibe, but with a beer hall feel at the same time. The obligatory corn hole game and a shuffleboard table. Plenty of board games. The place was almost empty when we arrived around 1 pm on a Saturday, but was plenty lively by the time we left.

An amazing selection of draft beers from Springdale plus a taste from the barrel option. The bartenders were pleasant and very helpful. This being our first visit, they certainly earned their keep explaining how things work plus explaining the beers.

You can also order limited appetizers as well as pizza from Jacks Abby and it magically appears at your table. Huge plus as we had planned on lunch at JA anyway. The food was outstanding as usual. A chorizo and shrimp pizza...warped mind you say? Genius say my taste buds as it was delicious.

Beer was top notch as expected. Two flights of four and not a bad beer in the bunch.

4.26/5  rDev 0%
vibe: 3.75 | quality: 4.25 | service: 4.5 | selection: 4.25
Is basically a large open warehouse area with a portion of the space dedicated to seating and a bar with the rest to barrel aging racks. Super high ceiling, cool place, but still feels like a warehouse. However, the beer will keep you coming back and isn't that the most important factor in this equation? Look forward to going back again next time I'm in the "Boston area".
Jul 17, 2018
Rated: 4.27 by gbiello from Massachusetts

The space is cavernous (300' x 100') with communal tables and a stand-up bar. Behind all of this is 100+ barrels resting futures brews. There are also plenty of games for the crowd to partake in. Like Jack's Abby, the tables are large and the expectation is that you share space with others, like a German Biergarten.

In short, this place is fun and relaxed.

4.29/5  rDev +0.7%
vibe: 4 | quality: 4.25 | service: 4.5 | selection: 4.25
I've been wanting to visit the Barrel Room since they opened; however, it's just not all that close. That said, I finally made it up on 7/7/17. Full disclosure - I was there at noon and the weather was terrible, so it was pretty empty. That said, the place was great! It's very much reminiscent of a German Beer Hall - long open space with about 20 wooden tables and a long bar. No food, but you can order pizzas delivered from Jack's Abby right next door or BYOF which is great. They had about 12 offerings on-tap. About half were wood-aged sours and the other half were IPAs, APAs and a few other style selections. I purchased two flights which I thought were very reasonably priced and was pretty happy with everything I had. Not everything was earth shaking, but all were solid. The pizza from Jack's was excellent, albeit a little pricey ($13 for what I would consider a small) for a Margherita pizza. They also had several pinball machines, skee-ball and a hunting game (maybe Big Buck Hunter). There were three coolers for takeaway and they offer growler to go options which is pretty great. Staff was knowledgeable and attentive and offered great suggestions for the sampling line-up. It was hard to rate the vibe because of the time, but I would definitely come back.
Jul 11, 2017

Reviewed by jmlewisjr from Massachusetts

4.03/5  rDev -5.4%
vibe: 4.25 | quality: 4 | service: 3.75 | selection: 4.25
A neat new addition or "spin-off" of Jack's Abby. It's the building next door so easy to hit both places. THey planned to make all special barrel aged beers and wilds/sours, but while waiting for those to age they started making a ton of ales, mostly IPAs (since Jack's Abby can't really deviate from lagers). Many different IPAs, experimenting with styles, hops, methods, etc, and most are pretty good. A handful of sours still mostly the ones made at Jack's Abby, and should have many of their own sours and barrel aged beers soon hopefully.

It's usually quite busy, and really that modern warehouse-built-into-a-bar-with-community-festival-style-tables you see a lot in Portland (both of them) and San Fran etc. Big open area with lots of games to play, cornhole, big standing arcade games, etc. Fairly young crowd and not quite but almost hipster feel to it. No kids so it's definitely an adult playground. Food can be delivered or brought over from Jack's Abby restaurant thankfully as you can easily sit there and have a few pints before you realize it. Pricing is typical, nothing crazy. They also have a large fridge section with beers to take home, aside from the maybe 10 they have on tap, and a couple bottles (all their own or Jack's Abby).

Bartenders were fairly busy for a Friday night, as expected, and lines didn't really form as expected and many customers just jumped in when they could. I wish the bar tenders and owners put a little more effort into organizing the lines so I'm not standing in line respectfully for a few min when some jackle just walks up and orders a beer while I'm trying to get the bartender's attention. However, they were friendly and knowledgeable.

I'd definitely go back, and I'd go here before I'd go to Jack's Abby which is too much of a madhouse with declining quality of the beers IMO. This environment was a bit more fun, enjoyable, and the beers seem to be pretty good so far.