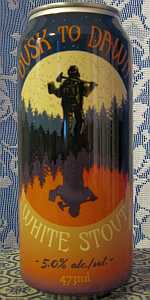 Notes: Prepare to be delighted by rich coffee and chocolate flavours with subtle notes of caramel and Irish cream. A fragrant coffee aroma is complimented by a smooth, velvety mouthfeel that rounds out this delicious brew.
View: Beers | Place Reviews
Reviews: 3 | Ratings: 4 | Log in to view all ratings and sort
Reviews by BigGruntyThirst:

A very unique beer. A white stout with hints of coffee and Irish Cream liqueur. I’ve never tasted anything like it but I have tried a couple of white stouts. I could drink one of these but that would be enough
January 31 2020

Pours a clear, medium golden-amber hue, its body flecked with specks of debris that gradually settle out. Situated atop is one finger of foamy white head that lasts for the better part of three minutes, eventually disintegrating into a wide, frothy collar as it leaves behind a snaking band of lace. Lots of ground coffee beans and espresso coming through on the nose - I guess that's what that sediment was - with the cacao nibs also providing a nice, rich, chocolatey backdrop to the aroma. There's also hints of vanilla coffee creamer and caramelized sugars.

One of those instances where the beer smells better than it tastes. Lots of coffee grounds right off the bat, with caramelized sugars, bready malts and cake batter leading into a boozy-sweet finish that blends vanilla, cacao, coffee and caramel. Lingering espresso, chocolate and milk sugar flavours in the aftertaste; the bitterness of the coffee clashes rather than integrates with the sweeter elements IMO. Medium-light in body, with middling carbonation levels that provide a little bit of crispness to this brew's generally smooth mouthfeel. One serving is more than enough for me.

Final Grade: 3.56, a B grade. Bonus points for creativity, but Upper Thames' Dusk to Dawn White Stout just isn't up my alley. I can't recall any other instance where a 5% beer tasted boozy, but there's a first time for everything I suppose. No subtlety whatsoever - this one just smacks you in the face with coffee, malts and lactose, but the aftertaste is what really ruined it for me. Worth trying at least once - who knows, maybe you'll really like it.

Pour - Pours a golden straw colour with a decently small head that fizzles out pretty quickly
Aroma - Smells almost exactly like a strong vanilla cappuccino from a good coffee shop with heavy vanilla caramel, white chocolate and blonde espresso notes
Taste - Almost exactly like the aroma, tastes like a vanilla caramel cappuccino with a very pleasant bitterness and lack of candy sweetness that you would've gotten if this were a regular stout
Feel - Light in the mouth but super bold in flavour and character, very very pleasant
Overall - This is exactly what I was searching for as someone who doesn't every rush to pick up the newest craft stouts (I work for the LCBO so I come across most of the popular craft stouts out of Ontario). The lack of over-sweetness that I find in a lot of the other craft stouts I've tried such as Omnipollo's, Wellington's, Left Field's etc. This is phenomenal where it mixes the bold coffee/chocolate base notes of a stout but with a delicate bitterness and lack of sweetness that blends so perfectly together on this beer. The vanilla caramel character is great and very unique as it tastes nothing like what I've had previously.

Dusk To Dawn White Stout from Upper Thames Brewing Company
Beer rating: 3.9 out of 5 with 4 ratings