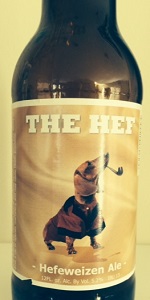 I've been looking for something to fill in when cold snap is unavailable. Lucky for this beer, Sam Adams is holding onto old distribution techniques. Cold Snap, my favorite beer is sold for a short period of time. In my area, very short. I have to hassle the store, to hassle the salesman, who's hands are tied by distribution. I see maybe 3 weeks of cold snap. 2nd favorite is White Christmas also Sam Adams. My local stores couldn't even, first beg, then yell, they never saw a 6 pack. I can't comprehend the thinking.
Thank you,
1stMobius
Highland, Mi
M-59 & Duck Lake RD. 48356

Having the Hef right in "The House" sitting at the bar in Frankenmuth. Enjoying a 20oz. pour, very delicious! Not normally my style but normal isn't fun. I can see why the Hef is their biggest seller, very rich flavors. Even if you don't like Hefe's, give it a try....

I love Hefeweizens and I always rate them high, this is no surprise here which are always flavorful. No matter where they come from and no matter the way they taste, they are always some of the best beers to drink!

Nose: banana and clove, some mango or other tropical fruit.

Mouthfeel: light but still some substance.

Overall: this is ok but nothing I would buy again. Not clean or crisp but not a chewy beer either. Ice cold on a hot day it would be good but not refreshing. Just not sure about it. Probably won’t try again.

Look: A palette between amber ale and gold lager, with a decent white head that quickly disappears.

Taste: A wave of strangeness, completely apart from lagers or ales. Orange peel, herbs and spices, and cloves abound. Malt flavor is low on the back of your tongue and hop bitterness is almost nonexistent, just enough to balance the sweetness.

Mouthfeel: A little thicker than your average lager, similar to an amber ale, with minimal carbonation.

Overall: This is a delightful change-up from the ales and stouts and lagers you normally find everywhere else. A cold glass on a summer day would be incredibly refreshing, but in the winter I'm just as fine with it.

Best Hefe I have had outside Germany. I'm not going to dive deep into technicals of this weizen -- only that its a near perfect reproduction.

Hefe is an acquired taste, not for everyone. I like it extremely cold, with an orange slice. Very "bready" beer that is best enjoyed with brotzeit (deli meats cheese bread meal). Germans consider it healthy for your digestive system and blood.

The Hef has the traditional yeast on the bottom of the bottle which requires rolling the bottle to work it back into the body. Traditional German pour is to slam a hefeweizen into a tall glass and lift to manage the froth
Otherwise you get a foam mess. Save some to swirl in the bottom to clear the yeast -- this produces a nice thick topping in your glass for that gasthaus look!

I found the Hef to behave better than its German counterpart -- which will help the amateur pour avoid a vulcanic yeast foam mess.

Frankenmuth has mastered the Hefe! I dont know how this hasnt been on my radar since its launch!

Usually these guys don't put out very good beers, but I found this bottle for $1 at my local Meijer and decided I would give it a shot for pure fucks sake. Going with this low expectations just means I won't get too let down ;).

Look - From the twelve ounce bottle hard poured into a pint glass. This beer pours a spot on hazy yellowish orange like hue with a two finger head that quickly goes down to a thick ring around the glass with a bit of a cloud formation amongst the top of the drink. Looks unfiltered. Carbonation is impossible to get a read on.

Smell - The nose on this beer is pure fresh ripened banana with just a touch of clove and bubble gum. So far, I do not understand why the rating on this beer is so low. This smells like an actual German counterpart

Taste - The taste really does follow the nose for the most part with the bananas being prominent though there is a bit of an odd sourness to the flavor almost like it's...too ripe? Perfectly ripe? I really don't know how to describe it. Cloves are all there as well but the bubble gum is gone at this point. Tastes like mixing a banana smoothie with a few ounces of orange juice. Very unique for the style and quite tasty though I can see why this would bother some traditionalists.

Feel - The body is medium but for over carbonated. The flavors remain much the same though the sourness does turn up a bit it still gets nowhere near offensive. Swallows easily and leaves tons of residual flavors in the mouth. Sugary flavors also become more prominent in this profile as the beer sits.

Overall - As I've stated I fully understand why some people don't like this beer. It lacks that..' edge ' that screams German. But as an American made example it did very well for what it aimed for. This will likely be the highest rating for this beer thus far. As stated, imagine taking a German hefe and dropping a bit of orange juice into it and you got this one down. I'd have again and I think most people would enjoy this beer whether they are craft drinkers or not..

Poured this into a lager mug, pours a nice moderate thick foam head (in an aggressive pour)
Looks of a deep golden, ripe banana color.
Smells fruity, hint of banana... I wonder where this is going?
Tastes like a beer, but with a decent banana flavoring. Not overpowering, still tastes like a wheat beer, but you can taste hints of banana in it.
Drinks smooth, mild to moderate carbonation, goes down easy.
Overall, if you like banana flavors, you'll like this. Though the banana taste is noticeable, it isn't too strong like herb/vege beers.

Decent and acceptable. No head or lacing to speak of, some banana/clove aroma but not much, same thing with the taste. Wheat bread seems to be the overarching aroma. Hugely smooth feel, though.

Not a big fan of hefenwiezens, but it is all my buddy had. Strong taste of banana and clove. Good aroma and good color. Went down surprisingly smooth. Not my style, but one of the better hefenwiezens I have tasted. Still would not purchase.

I picked up a bottle of Frankenmuth Brewery's The Hef last week for $1.69 at The Lager Mill. It's been awhile since I've had a Hefeweizen and I thought I would give this local example of the style a try, so lets see how it goes. No visible bottling date. Poured from a 12oz brown bottle into a weizen glass.

A- The label looks nice, it's a little funny and it goes well with the name, plus it's eye catching. It poured a hazy golden color that took on more of a orange color when held to the light with one fingers worth of off white head that died down to a thin ring that eventually faded away and it left a little bit of spotty lacing behind. This is a nice looking Hefe, but i wish the head and retention were better.

S- The aroma starts off with a slightly higher amount of medium sweetness with that signature yeast being the first to show up and it imparts a pretty even mixture of bananas and cloves with just a slight bubblegum like aroma to it. Up next comes the malts with some sweet malt, wheat and light grainy aromas coming through. This beer has a nice aroma, but I wish the yeast aspect was a little cleaner.

T- The taste seems to be similar to the aroma and it starts off with a medium amount of sweetness with the malts being the first to show up this time and they impart the same aspects that they did in the aroma with the wheat sticking out the most. Up next comes the yeast which imparts the same clove and banana aspects that still show up evenly. On the finish there's no bitterness with some sweetness taking it's place and it has a very yeasty and slightly grainy aftertaste. This is a nice tasting beer, but the balance could be a little better.

M- Smooth, crisp, slightly creamy, medium bodied with a medium amount of carbonation. This beer has a nice mouthfeel that works well with it.

Overall I thought this was a nice beer and I thought it was a solid example of the style, but it just doesn't have that great balance and refreshing drinkability that the good german made ones have and in the end I just wanted a little more balance from it. This beer had ok drinkability, it was smooth, crisp, slightly creamy, not too filling and the taste did an ok job at holding my attention, I think one is enough for me, I don't have the urge to drink another one in a row. What I like the most about this beer is nothing, there isn't anything that stands out as being better than the rest. What I like the least about this beer was the balance, I wouldn't mind if the yeast was toned down just a little. I don't think I would buy this again, but it's worth a try if your a fan of the style. All in all This beer wasn't bad, but it's far and away from being a stand out in the style. It's not my favorite Frankenmuth Brewery beer and it's just slightly above average for the style. Nice job guys, this wasn't a bad Hefe, keep it up.


The Hef from Frankenmuth Brewery
Beer rating: 82 out of 100 with 53 ratings