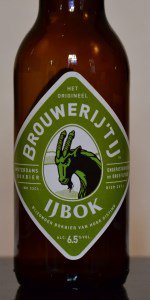 Notes: Our bokbier that rings in the autumn every year. Dark and full-bodied, but not as sweet as you might expect. The fine, light brown head holds for a long time while the dark, black-brown beer releases aromas of the roasted grains, a bit of coffee and dark fruit. The aftertaste is pleasantly dry.
View: Beers | Place Reviews
Reviews: 8 | Ratings: 31 | Log in to view all ratings and sort

L: Deep mahogany, good creamy tan head.
S: Malt and toffee, some dried fruit, perhaps some roasty notes. Good but a bit on the faint side.
T: Following the nose. Malty but not too sweet, just a few notes of toffee/butterscotch and raisin/prune. But basically, toasted bread notes and coffee. Good, just a tiny bit too bitter.
F: bodied and silky. Good for a cold night.
O: Good bok, not cloying. Still, not that remarkable.

L - clear, deep garnet color. Off-white head that dissipates quickly leaving only some lacing along the edges.
S & T - little dried fruity tart-balanced sweetness of on the attack (blackcurrants?); some roasted coffee tones throughout with the slightest hint of warm spiciness of coriander seed; then finishes with a grapefruity-pithy bitterness.
F - little bit lacking carbonation-wise.

O - as the description says, less sweet than most bokbeers. So if you like your bocks on the bitter side rather than the caramelly, you could try this one. Still, I didn't quite like this one. Even on the less-sweet bokbier front, I would prefer a La Trappe Bok to this one, every single time.

Nice malty, pleasantly bitter, fruity plum and dark berries really a topper like to try when it is aged again so a bit patience
and try again with waterteeth

Dark ruby pour, with a very small white head with no retention. Smells like bitter caralem and cold wort. Tastes bitter, but a kind of herbal/chemical/metallic bitter that I don't particularly enjoy.

2015 Seasonal. A dark brown colour, almost black, with a cappuccino coloured head of foam that fades quite fast, leaving some lacing. Smell of roasteg grains and yeast. The roasted grains return in the taste, together with hints of caramel and raisin. It is not as bittersweet as i expected of a dutch 'herfstbock' though. The finish is actually very dry, with a bitterness from the hops that lingers quite well. Nice full body. If you don't want your bocks to be sweet, you might want to give this herstbock-dry stout hybrid a try.

The Dutch bokbier style is a big thing here in the Netherlands and though its best days seem to gone with so much more going on on the beer scene nowadays, it is still the number one of all seasonal beers. I myself have never established a real romantic relationship with this usually rather onedimensional style. caramelly sweetnes is in principle the dominating flavor and when the malts and the mash are somewhat off or fermentation is not drying it out enough this can some sweet mess. Not so the IJBok that is generally amongst the better offerings and with their new brewhouse they seem to be finally able to produce a clean bok with caramel malts in interplay with some roastier malts and a drier crisper finish. They made the second place this yesr in the Dutch bokbier festival in Amsterdam. I would say that this is well deserved. Anyway still not a fan of the stile

Blind Dutch Bockbier tasting project fall 2019
Mainly very fine beige foam but also occasionally bigger bubbles, foam is only a thin layer though. Black Body but also ruby against a light source and carbonation is visible 3.75
Burnt malt, coffee but not too much, also toffee 3.5
burnt flavors are present as well, rather dry and crisp, crispness and hop bitter are dominating the aftertaste, a bit watery 3.5
body is on the thinner side but smooth and with some very fine prickly carbonation coming through 4
I am not a big fan of the roast character, but I enjoy that it is rather dry. Not much alcohol presence. My nose is not working at its best but as I do not get any aroma except from the malt this could be a lager 3.5

Pours a deep brown with lighter brown highlights when held up to the light. Nice white head that settles to a cap which covers the entire beer.

Nice caramel aroma, lots of sweetness with a lot of sweet fruits. A little nutty but dominated by caramel.

Taste follows suit with the nose with the caramel dominating and a bit of a nutty flavor in the after taste. There is a detectable alcohol heat but it is not overpowering by any means. Just lets you know that the alcohol is there.

Body is a little thin and the carbonation is a little high for the sweetness of the beer.

Overall this is a pretty good beer, I've had better examples but this one is pleasant and even a little alt like.