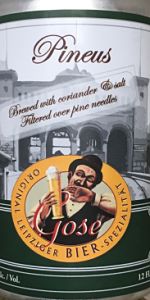 Notes: Historic Gose recipe first brewed in the early 18th century in the town of Goslar. Brewed with coriander & salt, it is then filtered over pine needles in the lauter tun.
View: Beers | Place Reviews
Reviews: 10 | Ratings: 46 | Log in to view all ratings and sort

Aromas open with balanced lemon with a bright dirt and composting earth detail; musty wheat foundation, with a subtle pine and savory salinity to round it out.

Taste brings a wave of tart earthy funk with steady lemon and musty wheat to support; fresh pine eases in on the back end, along with some mild coriander spice.

Mouthfeel has a silky medium body lightly bolstered with ample fluffy, high-level carbonation; tartness on the milder side of moderate peaks as the mid-palate transitions toward a finish that leaves a light lingering to fade steadily.

So satisfying and nuanced, this is packed with a depth highlighting everything from wild funk to gentle salinity, all shining in a neatly rounded package; everything about this flows along with ease.

frankly as good as this style ever gets. the american breweries always lose the german elements that make the style special, the way the wheat tastes, the flavor not just the acid from the souring process, and the high mineral salt, its simple, but its awesome when done well, and these guys of course do it right, putting almost everything domestic in this field to shame, but this edition with the pine needles is next level, even elevated beyond the sublime original, tart and herbal and perfect, its world class beer all the way. i also think its epic that this is being canned now, a more accessible and affordable format for it, much as i love the old genie bottles that look more suited to a balkan spirit than an ale. in any event, this is about as close to perfect as you can come here, the pine is honest and natural, adding a sappy body and a really fresh springy tree essence, a cool additional woodsy and earthy layer, enhanced well by the salt and the dry wheat, which is so fluffy and full here. the tartness also seems to come twice, once from the lacto and once again from the salt briney dryness at the end, but its never acidic to a degree that slows me down at all. so much flavor in here, and so much life, the carbonation is explosive and unhinged. its refreshing for being so darned complex, and really this is as good a summer patio drink as any light boring lager anyone is doing. i cant get enough of this, maybe the best gose i have ever had. balanced, dynamic, and the pine sets it off. a phenomenon really, just elite!

A: The beer is hazy dark yellow in color. It poured with a quarter finger high white head that gradually died down, leaving a thin collar around the edge of the glass.
S: Light to moderate aromas of funky lemon citrus are present in the nose along with notes of pine needles.
T: The taste has flavors of lemons and corianders spices with strong notes of pine needles towards the finish. There is a light amount of sourness and saltiness.
M: It feels light- to medium-bodied on the palate and has a moderate amount of carbonation.
O: The use of pine needles in this gose were very unique and made this stand out compared to other beers in the style.

What a fun beer. A light refreshing brew with straight green pine needles covering the palate, for days. The beer is gently tart, light mouthfeel. A really unique brew.

L; Yellow golden color. Almost looks like an ipa except for the cloudiness.

T: Tart lemony taste, with pine needles. Surprised how well this works. I don't pick up any salt.

O: The most unique gose I've had. Good stuff.

I was surprised by how much I liked this beer. I was expecting a heavy handed pine flavor, similar to lapsing souchong tea, but the pine was just one of many notes. Delicious.

Aroma/Flavor: A burst of spruce and licorice. Light acidity.

Overall: A very cool beer, crazy how pine in a mash tun can add such a layer of flavor.

Had this on tap tonight at Bittercreek in Boise... Pours identical to the regular Leipziger.... Short lived white head atop a slightly hazy golden brew.

Lactic/lemon with lighter than expected but ever present pine that seems a little antiseptic to me, but is incredibly drinkable.... Crushable.

So excited I got the chance to try this.

A- Straw colored pour, clean white head that lasted a minute. About the same as the non pineus

S- The pine is really subtle, if I didn't know any better I would think that perhaps the standard version was dry hopped with a northwest hop variety and re-labeled pineus. The coriander in this case in non existent, and the salt is virtually undetected except for a faint presence in mouthfeel

T- The pine is even more subdued in the taste. I have only had a limited sampling of this style, but I have had the original Gose from this brewery, and this offering leaves more to be desired. I could not distinguish any coriander or salt for that matter, I was hoping for more, maybe a more complex brew, but I think I would rather take the original over this one. The pine additions seemed watered down, I think a more heavy hand with some more selective hops would've been appreciated more.

M- Fairly thin, not much on the back end, but finishes well. I could see this being refreshing, unfortunately it's 20 degrees and snowing outside, but I won't hold anything against it

O- Was really hoping for more, the original Gose from this brewery is what turned me on to this style of beer, but the salinity and coriander was completely lost in the session. Maybe it was an ageing keg, but I would much rather prefer the Gose without the pine.

Not sure on availability. The beer is listed on the menu where I got I under "tart and fruity/delicate" as brewed with salt, coriander, and pine needles. Both my girlfriend and I thought the pine was subdued, but so was the tartness (delicate?). Our bartender said the pine was too overwhelming for him.

A: cloudy golden with significant foamy white head, sustaining without some lacing
S: tart as expected, little yeasty; I get some of the salt, but not any pine
T: light and a little bitter before the tartness (lemon) grabs hold. This tartness does hold throughout the taste, but is joined by the pine taste, which for me is a more powerful taste that the tartness, but the combination gives a little peachy taste for a fleeting moment (rated lower b/c not sure it fits the style).
M: the pine flavors make it feel dry, but actually I felt in ended refreshing enough.
O: definitely a beer to try when you feel adventurous, but you might be pleasantly surprised, especially if you enjoy a piney-tasting beer.

Pineus from Gasthaus & Gosebrauerei Bayerischer Bahnhof
Beer rating: 88 out of 100 with 46 ratings