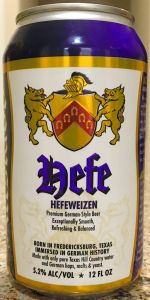 Notes: A traditional German Wheat beer. More than half of the malt used in this full-bodied brew is made up of German malted wheat. But the star of this brew is the yeast! Fermented in our open fermentation vessels, the yeast is free to impart a variety of fruity and spicy clove-like flavors.

Pours a very hazy pale yellow with no head. Literally smells like bananas, can't even smell the yeast. Tastes like bananas with just a hint of something that tastes similar to beer. Pretty fizzy beer, has a light feel to it. I know they advertise that this beer gives of distinctive clove & banana aromas, but its just to much for my palate.

Poured from a can into a pint glass
Appearance – The beer pours a very hazy yellow-amber color with a two finger head of puffy white foam. The head fades slowly over time leaving a moderate sum of foamy lace on the sides of the glass.
Smell – The aroma of the brew is massive of a banana and wheat smell mixed with a ton clove and some sweet citrus smells. Along with these aromas comes a bit of hay and some grass, and with the rest produce a very robust and inviting spiced wheat bread aroma.
Taste – The taste begins with a nice wheat bread flavor that has a good showing of a slightly unripe banana and some citrus. These tastes last throughout the taste and create a base flavor, only changing a bit at the end as the wheat gets a little lighter and the banana and the citrus get stronger. After the initial flavors greet the tongue, other flavors of a clove and coriander spice begins developing, with these getting stronger as the taste moves on as well. At the same time a touch of hay comes onto the scene and with the rest of the tastes ends up leaving one with a sweeter but quite nice hefe flavor to linger on the tongue.
Mouthfeel – The body of the brew is on the thicker and chewier side with a carbonation level that is rather average. For the style the feel is good and matched the wheat bread flavors very well.
Overall – A rather nice brew overall with lots of flavor. A rather easy sipping brew.


Hefeweizen from Altstadt Brewery
Beer rating: 86 out of 100 with 19 ratings