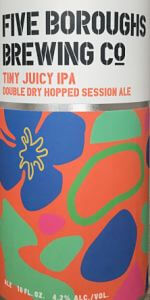 Notes: A hazy session IPA brewed with copious amounts of ﬂaked oats. Hopped with Mosaic, Simcoe and Cascade for a fruity and piney ﬂavor that is cleaned up with a punch of bitterness. Tons of hop character in a small package–super drinkable and great for the season.
View: Beers | Place Reviews
Reviews: 8 | Ratings: 41 | Log in to view all ratings and sort

Poured from a 12 oz can dated 3/21/20 about 10 days ago, so super fresh. Great burst of tropical fruit upon opening . Light thin head that quickly fades to generous lacing. The taste is big peach and pineapple, probably Mosaic hops. Body just a bit thin, but pleasant. Finishes with a nice bite, and at an amazing 4.2% abv this is for all day sipping . Really impressed. Bravo

Had on tap at Blacktap in midtown NYC. Not sure without requisite haze nor ABV this really merits NEIPA depiction, but it sure was tasty. Heavy pineapple and lemon. Borderline "clear" compared to tradtional hazy NEIPAs. Fruit forward for sure and crisp tasting, though I'd rate closer to almost a shandy level of fruity and low ABV.

Jumping on the juicy trend this bucks it with a very low ABV, being it's own version of an all day haze. The problem is, the juicy hazy NEIPA style needs alcohol to punch up all the lovable characteristics so while this is a noble effort, I probably wouldn't buy it again. Not much to say for the look except straw light haze with little head. A bit of citrus and juice on the nose but the taste comes across the same - a bit of those. Finished fine and is ultimately serviceable but gimme some heft.

This is an easy drinking beer, would opt for it over any macro lager. Maybe it's in the style but found it lacking flavor.

From mental notes and several tastings.

Picked this up at Whole Foods in NYC, after some hesitation on the account of it being a brewery I hadn't tasted from, and it being a "juicy" IPA, which I translated to "New England". I'm not Anti-NEIPA, but I'm just very non-plussed, and I do require some bitterness from a pale ale.

Pours a cloudy, but appetizing bright gold which forms a nice two finger head which hangs around for a good bit and leaves enough lacing to not having me second guess what I am about to consumer.

Aroma was grapefruit rind and maybe some orange notes, but generally fruity and appealing. Still feeling good about the beer.

Taste is on the money, and for a low ABV (4.0%), I would choose this over many options for the sake of both enjoyment and health. By the way, despite it being an IPA, it is uber session friendly. Bright, carbonation balanced to my liking, enough bitterness to keep things interesting, but no so much to have me reaching for something else on next round.

Drank the sixer in two day, 3 per day, and bought more the next chance I had.

Very good beer that I hope stays around, as the session IPA is no longer abundantly available these days.

Poured from a 12oz can into a pint class. A cloudy-lemonade color with a bit of amber and a shortlived white head that turned to lace. Smells of lemon rind, honey, biscuit and booze. First sip seems a little thin, with a big of citrus splash and resin notes then fading into a slightly malty finish. Gets a little deeper and interestingly tart with the following sips. Mouthfeel is light and refreshing. Eminently drinkable. A ton of flavor and heft for the ABV. A nice session NE-style IPA with some originality: more fruit than hop, more depth than you'd expect.

The look was pale-apricot, minimal head, hazy but not opaque.

I was expecting a fruitier smell, but it was more restrained, citrus with other fruits.

The big surprise was the taste, which had a surprising, though not unpleasant, tartness, balancing the fruit. Some hop bitterness in the back.

Overall, this beer, from a local brewery that I’ve come to appreciate, might fill a niche for people who like a refreshing, lower-alcohol pale ale, on the tart side but not sour, and less of a fruit bomb than a more typical NEIPA. Nice job.

A: The beer is hazy and somewhat pale light yellow in color and has a light to moderate amount of visible carbonation. It poured with a quarter finger high white head that died down, leaving a thin film of bubbles on the surface and a thin ring of bubbles around the edge of the glass.
S: Light to moderate aromas of citrusy hops are present in the nose—grapefruit and oranges seem to stand out in particular.
T: The taste follows the smell and has moderate flavors of citrus hops along with a light amount of bitterness.
M: It feels light- to medium-bodied and crisp on the palate with a moderate amount of carbonation.
O: This IPA is perfectly sessionable and has a nice dose of hops in it considering its lighter body nature.