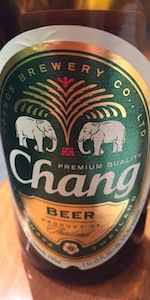 Notes: None
View: More Beers
Recent ratings and reviews. | Log in to view more ratings + sorting options.
4.06 by beerrat from Virginia on Oct 31, 2021

Herbal, rice, and elements of a sour in the flavor.

It complimented the spicy Tai food, so that’s something good.

Don’t know why I always expect something a bit more exotic when I pick up a beer from a distant country, even if it is a pale lager. And almost always end up disappointed. Here, the restrained aroma is vegetal; the sweetness from the rice is distracting enough that you forget about the hops (are there any hops grown in Thailand?) and the light bodied, passive palate gives way to a short lived finish. Rated to style (generously) rather than personal taste.

Another one I’ve somehow overlooked for ages.
Pours clear and fizzy, with a white cap that rapidly dissipates.
Musty aroma, like a memory of faded hops. Sweetish on the palate, with a quick finish. Blink and it’s gone.

Yet another in the long running series of "how have I not reviewed this yet?" Chang is one of those beers I don't think I've ever drank when not eating Asian food.

Pours the industry standard yellow with ample clarity and a quickly dissolving head that goes up no higher than 1/3" but really settles into a 1/16" film soon thereafter the pour. The aroma is mostly just grain, but barley does seem to lead the way. Hoped for a bit of skunky lager to it, but I think the green bottle just made me optimistic because it wasn't there.

Taste is mild, mostly that watery barley sense, sometimes if you get the real hot shit (food wise) you can pull out a little noble like hop bite and bitterness out of it. Mouth feel is a very carbonated light beer like quality. Seems slightly heavier and less cut with rice or sweetness than Budweiser. Pretty similar stuff at the end of the day.

Ultimately, there is not a lot of substance to this beer, but parse it through the style, its kind of meant to go that way. I didn't find any off flavors, so temper your ratings, this isn't a beer you rage about, its a beer you have with food.

Smell: Skunked, as expected from the green bottle. Mild sweet malt behind it.

Taste: Corn malt with some skunk. Nothing else.

Overall: As you could probably guess, yet another cheap macro lager.

It taste like your typical Euro Pale Lager. I highly recommend this beer. Cheers! B-

Aroma: Clean, with some grain. Hint of rice.

Taste: Cold and crisp. Not too adjunct heavy.

Mouthfeel: Quaffable for sure.

This is a decent beer for the style, pours about a finger of white head and leaves little to no lacing on the glass. This just like what a Euro lager should taste like. There is nothing great or bad about this beer. It is worth a try as a single.

Gold in color with excellent clarity and a minimal to moderate amount of carbonation bubbles erupting from within. There's a fingernail of off white covering about a quarter of the top. I smell plenty of well water lager yeast/hydrogen dioxide along with a hint of grassy German hops. I'm tasting plenty of hydrogen dioxide and just a suggestion of grassy German hops. The mouth is very dry and refreshing.

I don't understand why the Chang Beer (Imported) listing was designated as "Retired." The beer I'm drinking says "imported." Clearly it was not retired as I just bought the beer today at Jons in Southern California.

Anyway, this beer is pretty good for an American lager knock-off. It has more flavor than a Miller or Bud and seems more amber in color. It has a flavor reminiscent of Carlsberg, probably due to its green glass. To say that this beer is Poor, as its current ratings stand, is just plain wrong.

Given its style, price point and market, I'm very surprised this beer isn't rated higher. This international take on the macro-brewed American Adjunct Lager surpasses its prototypes in every single way. Chang has a wonderful meadlike quality. It is sweet, refreshing, crisp, smooth finishing. Everything AB Inbev promises in its commercials but fails to deliver in its products Chang has in spades.

On draught in Chiang Mai, Thailand.
This is a pale lager with low carbonation. Smell and taste are both light. Slightly sweet, rice is noticeable and hoppy bitterness is low. Mouthfeel has some chew but is otherwise light. The lack of carbonation is unusual.
This beer is adequate sat next to the river on a balmy December evening. It suits the locale but it would be average to poor in any other circumstance.