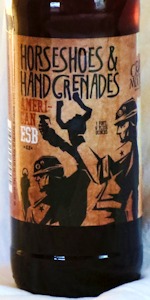 L:. Pours a copper gold orange with a small white head and rings of lacing around the glass.

S: Nutty and baked bread, a floral hop in the back.

T:. Nutty and baked bread with a slightly over strong bitterness from the floral hops.

Had a pint of thos beer poured on nitro at the tap room on south colorado blvd.
Beer arrives a deep mahogany color with khaki colored, creamy cascading head of 2.5 cm.
The foam remains a surface layer through most of the sampling.
Aroma is toffee and some nutty notes witha bit of grassy hops as a balance.
The first sip reveals an average body with soft creamy texture due to the nitro. The texture really works for me on this beer. Very nice combo.
Flavor is what id expect from the style and the nose advertising. Caramel and toffee up front moving to again a bit of a nutty character and some toasted note. Then some grassy and earthy hops come through on the finish.
Very easy drinking, no hint of alcohol and i very much enjoy this beer.
I would definitely drink this again if in Denver, especially if on nitro!

Poured into a soccer ball shaped glass, more like an Irish pint glass than anything.

Taste: Starts off malty and sweet with caramel notes and is countered with dry, tangy hops.

Overall: It is well balanced but the bitterness of the hops is slightly more prominent.

I wanted very much to enjoy this beer,but before I review it I must say that after consuming for of the six in the pack, I feel there might be inconsistency issues. It pours a nice and nearly clear caramel amber to brown, sometimes with exceptional over carbonation in which I poured a quarter of its contents at a time with minutes between, and others with one smooth pour leaving it with either an excessive frothy and rocky white root beer float of a head, and others with a simple two finger foam. Lacing moderate in either case. Smells of caramel, lightly toasted bread, and a dirty earthy and grassy aroma. Taste follows; light caramel/toffee/toast followed by a good dose of earthy hops. Feels highly carbonated, balanced but definitely finishes with a strong dirty bitterness that lingers. Overal, this was an OK ESB, but I will most likely not seek it out again. Cheers!

On tap at Mango's in Red Cliff, Colorado.

The beer poured a light golden. This is a fairly sweet beer with a low hops presence and a hint of herbalness. The body is appropriate for the style.

Overall, this is a very nice beer, and I'll look for it again when I'm in Colorado again.

12 oz bottle is undated but purchased just yesterday from a cooler, but today it seems to be a bad sample. Gently pouring less than 2 inches of liquid produced a rapidly rising head that quickly rose up and over the top of the glass. The aroma is off and there's some off flavors.

APPEARANCE: A dark amber, almost red. Two fingers of long lasting, creamy, khaki head that leaves a thick lacing down the glass. Lots of big bubbles streaming up the glass.
AROMA: Very malty, a cola like quality, lemon/citrus.
TASTE: Big bready malt, bitterness up front that lasts but is pretty mild overall, the beer as an acidic quality like lemon.
FEEL: Average carbonation, medium body, slick.
OVERALL: Malty and a fair dose of bitterness, but kind of non descript. Not bad, though.

A first for us from this brewery. This fine ESB pours a cloudy orangish amber with a very nice head of fine beaded off white foam that settles to a thick ring and layer with excellent lacing. Nose of subtle floral hops, sweet malts, and a moderate touch of tea. Flavors follow yet exceed by character alone with sweet caramel malts and moderately heavy tea flavors on the front and sides, floral and bittering hops hit nicely on the middle and back and finish off with a nice lingering bitterness from the hops. Nice mouth feel, medium high carbonation and a delicate creaminess that is not usually seen in the style but is welcome none the less. Overall and excellent brew.

Warning: this is not an ESB. I'm not sure what this is. If you really like Belgian yeast and amber ales then you might like this. It just doesn't seem like a good combo to me. Ok, it's not terrible I just can't figure out what it is. It starts malty, but with the distinctive Belgian yeast flavor and finishes a little sour.

The plague of the American brewer falls upon them as they embark on styles, techniques and ingredients that they attempt to mimic, but done so with luke-warm success. Thinking they they can get close enough to those authentic brands to pass as such. But close only counts with horseshoes and hand grenades.

And with their heart in England but their home in the Vail Valley, Crazy Mountain's aptly named "American ESB" shares what's best about both worlds. Its deep golden and moderate amber glow is slightly hazy and capped with a sturdy meringue froth. With biscuit-sweet aromas swirling around, so do the light apple, orange and apricot esters that suggest British beer. And as the moderate sweetness layers onto the tongue, caramel and honey seem marmalade-like in its malt-forward upstart.

And then balance happens across the middle as the malts relax slightly and the hops begin to rise. While retaining the floralness of honeysuckle, the buttery toast and the nuttiness of cashew; the medium bodied ale allows for a charge of American hops to rival the malt rebuttal. Mildly juicy with pineapple pulls from the estery taste and delves into a light and resiny bitterness to close.

Medium, moderate and hitting all strides right down the middle, the beer is strikingly familiar to American amber ale, except with a more complex malt bill and less reliance on American hop character. Still, the ale trails with a bittersweet finish and a linger of citrus peel and caramel.