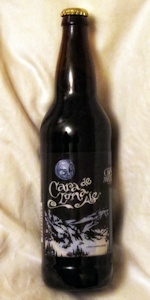 December 23rd, 2015 - An odd beer, an amalgam, a quilt of odd flavors and ends mashed together into something drinkable, if not very engaging. To the eye it looks like a stout, with a heavy buffer of two fingers of foam, cratering a little under its own ambition. The aroma has a slightly dusty character to it, with some smoke, white pepper and beef jerky. Very odd, and interesting, though not appetizing. I'm hoping the flavor goes some way to increase the appeal, but it instead riots on a tang and sourness, with a thin palate. It's hard to describe (and reconcile with the color) but I would liken it to a sour saison with a slightly darker malt bill, but the flavors and the mouthfeel are a bit twisted.

Poured into a cervoise glass.

Look: Porterish black with plenty of ruby on the edges. Light cream head that fizzes out to a decent film layer, very light lacing.

Taste: Much like the aroma with light coffee roast and a good milk chocolate presence. Hops offer slight earthy woodiness in the finish.

Overall: I like that this one isn’t overly hopped and bitter — good chocolate notes.

Deep dark wine red, clear in direct light. Pale brownish tan head of light, rocky foam. Creamy on top, almost like a skin has formed. Excellent retention, but the somewhat cylindrical stout glass may be the reason for it. Patchy lacing. Roasty, smoky-tart, ever so slightly rubbery on the nose. I anticipate a good balance and little in the hop department. Indeed, very smoky tart and dark fruity flavor, but more metallic toward the end of it than bitter or burnt. Tartness on the tip of the tongue, faint dark chocolate as it settles, and dryness and roast on the back, especially in the finish. It’s almost enough to hide any hops that are here, which are earthy or soily for the most part but I feel like there is an orange vibe underneath the dark fruit and balancing with the chocolate, as well some mild peppery hints in the retro-olfaction. Light to medium in body, round and smooth. Carbonation is the finest tingly suds. Considerably sharp around the tips and edges, but overall, all but creamy by the end.

Look: dark brown with a tan head and plenty of lacing

Feel: a bit sharp and thin

Overall: a very pleasant beer with a focus on the roasty and chocolate notes. Feels a bit thin though.

Nothing extraordinary. But very drinkable. I liked it. I would have it again. Pours a dark brown with a thin head. Body is on the thin side as well. Smooth and creamy. I could see myself kicking back and having a few in one setting.

Appearance: Darker brown with a thin off white head.

Overall: Good beer, I would have this one again.

A - a rich black slightly ruby hue like chewing tobacco. Beige head that faded quickly with some lacing. 4

The smell has a little bit of roasted malt, a hint of chocolate. .not much really going on here.

Same goes for the taste. Light flavours all around but it is still a decent beer.

Not a bad Black Ale.

The nose is not big – clean, mostly malt with light touches of roast. Pours deep dark brown with a 3” tan head. The very creamy palate provides smooth chocolate and grain flavors with a dash of caramel and a touch of vanilla. No burnt roast flavors, very light traces of espresso on the finish, no big bitterness. Balanced towards the malt. Medium body and carbonation.

a session type black ale from crazy mountain that has the odd paradox of not being a beer i would particularly care to make a session out of. its dark brown in color, almost black with an amber glow in the light, and a half inch of head thats gone before i can blink. the nose is a little sweeter, almost red grape juice sort of sweet, with a schwarzbier type malt bill, german, dark, earthy, and still lighter than others. the ale yeast is nondescript in flavor, but i feel like it hasnt all the way done its job, maybe too short of a fermentation time, maybe an under pitch, i dont know, but i know this beer has more residual sugar than i care for, particularly in the black ale style, where the incumbent earthy dry finish is what works for me. the fruit flavors in the middle of this throw me off, but i dont dislike it. its the feel that sort of turns me negative towards the whole thing, its too sweet and not carbonated enough. there is nothing refreshing about this beer, even though its flavors are pleasant and unique. not a bad miss for crazy mountain, but just a little off the mark. a dryer finish would make it a keeper.

Pours black with a moderately dark brown head. The head leaves signinifcant lacing and has great retention. Nose features some light roasted malt, some smokiness, a bit of yeast and some mild chocolate. Taste matches the nose for the most part with heavier presence of the roasty malts. Mouthfeel is light and well carbonated. Overall, nice flavorful dark lager.

I must have had a bad bottle because I could not rate this as high as others before me. Certainly it looks like it should with a deep dark brown to black color and a long lasting, soapy tan head.

But the aroma was way off. I got something akin to sour green apples and little in the way of malts, sweet, smoky, or otherwise.

The body is pretty decent and in the medium range.

Like the aroma the taste is more akin to sour, spent fruit like green apples. There is a slight hop bite despite that but it is very hard for me to enjoy this. I hope I got a bad bottle because if it is supposed to taste like this it certainly doesn't make me think Porter.

A very tasty, relatively low ABV, and easy drinking dark ale. Sweet and creamy feel and taste with an excellent balance of malt sweetness and hop bitterness. Well worth trying once and coming back to savor again.

Hopfully this is interesting, a German/Belgian/American style blend so could be interesting.

Nose starts with some chocolate malt, dark cocoa but watery like hot cocoa made with water instead of milk, a little toasted crystal like but not caramel, not a whole lot of overall maltiness, mostly just the dark chocolate like malt characters, a hint of a bready aroma, a touch of metallic edge from the roastiness, and just a bit of a grassy slightly spicy hop. Overall a bit light on the nose.

Taste brings a whole lot more dark malt and cocoa, like chocolate malt and powdered cocoa but a dry version of it, but this time some lactose sugar but again dry lactose. A nice stout flavor, a slightly bitter extra stout flavor. Also a mild roasty flavor, with touch of metallic roast, and a little yeasty note. It also brings a little dry bready character, probably from the yeast. Then into a grassy hop character, little spicy too but overall mild bitterness. Finish is a little sticky surprisingly as it was so dry throughout, bit of powdered flavor like a cocoa and powdered lactose blend, bit of a crystal malt character, and mild grassy hop with a touch of yeast still.

Mouth is med bod but maybe a bit on the lighter side, decent carb.

Overall not bad, for how much little malt they seemed ot have used it has a nice flavor profile, good dark malts without being overly roasty or tannic but there is a little bit, hops could have been a bit stronger but not too bad, a little yeasty unfortunately, but otherwise not too bad of a beer.

22 0z. bottle. Pours a very dark brown color with a moderate tan head on it. Nose is roasty and smooth, but not too complex. Taste is just a little bit sour, with some dark roasting elements to it. OK, not a great example of the style. Not a huge fan of it.

Pours blackish with a nice mocha head. Aroma is deep and roasty with a earthy hop backing; black coffee, dark chocolate, and some earthy hops. Flavor was much the name; black coffee, dark chocolate, earthy hops. Not sure i got the belgian yeast used from either the aroma or flavor. A crisp, thin to medium mouthfeel, decent activity, making this plenty drinkable. Overall, not a black ale fan personally but this is one of the few I did enjoy. Far from being on a Wookey Jack level but I would drink this again.

It's a wonder more people don't make beers in this style.

Cara de Luna pours black as sludge, with a tawny head that has good staying power. Lacings are sticky.

The smell is roasty, milky and malty, with a touch a chocolate. No hops to be had.

What's best about this beer is its surprisingly refreshing feel. It's bubbly and semi-thick, with a roasted malt, touch of coffee taste sticking just long enough before it's whisked away. There's enough bitter at the end to keep it all together, but not so much as to be overwhelming.

A nice choice for a session beer. Good flavor, good feel, not big enough to assault your palate.

Had this one on tap at Craft and Growler in Dallas and would definitely recommend. Solid dark beer that is surprisingly well balanced - there's a bit of hops, a bit of malt, and some notes of chocolate, but none are ever overpowering. Presents an interesting and compelling study of balance in a dark beer - especially when many dark beers (including some of my favorites) skew heavily towards strong flavors. This one certainly has bits of those, but is also pleasantly drinkable as a session beer as well.