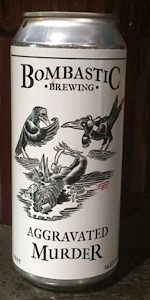 A pumped-up version of our imperial stout with two separate additions of robust maple syrup. First in the boil to add a woody flavor, then in the fermenter to give the traditional maple flavor. Finally, we add cold-pressed coffee from Thomas Hammer to make the perfect breakfast stout.

16oz tallboy can purchased at the Spokane Valley Total Wine for $. Apparently it's contract-brewed. The can label states it was "brewed and canned by Sawtooth Brewery in Hailey, Idaho, for Bombastic Brewing."

Very dark brown, virtually black, with a rather viscousy pour. Thin, khaki colored head that receded to a very thin ring quite quickly, leaving no lace.

Bitter, roasty, raisiny, coffeeish and soy-like aroma. No maple syrup in the nose initially, but it comes out to play as it warms, and the soy-ness thankfully recedes.

The flavor is a juxtaposition of the bitter, roasty coffeeish notes initially in the nose, and the sweetness imparted by the maple syrup. The maple syrup wins the battle between the two elements and sticks around til the fadeout. It's not as boozy as I was expecting, considering it's strength.

Although it carries it's alcoholic heft rather well, it is otherwise a massive stout bomb that blasts the tastebuds like a shotgun. The coffee isn t as assertive as I expected, giving ground to the maple syrup. Seems a little crude. I'm quite curious how it would age. I would suggest this be your breakfast beer only on a day off and you can take the time to sip on this for a while.

A: The beer is jet black in color. It poured with a short tan head that left a thin layer of bubbles on the surface and a narrow collar around the edge of the glass.
S: Light to moderate aromas of dark malts are present in the nose along with notes of coffee and hints of maple syrup.
T: The taste follows the smell and has flavors of dark malts with notes of maple syrup and hints of coffee. Neither bitterness nor sweetness are really noticeable.
M: It feels a bit more than medium-bodied and slick on the palate with a moderate amount of carbonation.
O: I really enjoyed this stout because the maple syrup and coffee additions were noticeable but not overpowering and it also did a remarkable job at hiding any traces of alcohol from the taste.

Very boozy yet smooth, with minimal head retention and a prominent fudge aroma. The maple syrup flavor certainly comes across in the taste, even moreso than the Thomas Hammer coffee it was brewed with. The body to this beer was a bit thinner than I had anticipated, but this quality didn’t take away from its drinkability for me.

Not a bad first experience with Bombastic Brewing, and I hope I get to stumble across more of their jams in the future. Thanks, Tavour!

22 oz bottle- Pours motor oil black with a small dark tan mocha colored head. Aroma is a touch of sweetness from the syrup, coffee, toffee, caramel, all subdued yet pleasant. The taste is velvety smooth, rich, decadent, coffee, caramel, chocolate, perfect balance of sweetness and slightly dry. The mouthfeel is full and oily, carbonation is on the light side. Not bad, very easy drinking, especially for the abv.