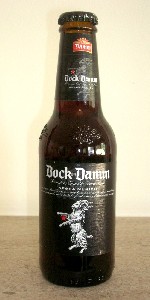 Notes:
View: Beers
Reviews: 21 | Ratings: 58 | Log in to view all ratings and sort
Reviews by nekronos:

Smoky, but just a little, is not a great Bock but is not bad at all, good with fruit cake, I guess, toasted barley is used appareanlty, and the coour reminds you a little cocacola, but better, and the foam is there to help, good one, not yellow as most of bocks, and not solid alike like theirs.

Easily the best beer I had while in Barcelona. And the most elusive, none of the markets had it. Had to find it at a bar.

It´s not really a bock, more of a schwartzbier. Damm likes to confuse their styles.

The first thing you notice is the wonderful seductive aroma. The beer is a really solid black lager. Roasty and malty. The hops aren´t too assertive but it works.

I was received at Barcelona's pratt airport after customs by a friend with one of these at hand.

I was actually impressed with the reception I got, considering you couldn't expect much from spanish beer from the start. but this was actually a decent-tasting beer.

The pour was perfectly black although not too opaque and against the light it reflected a bit of an amber tone. The head was medium sized but actually quite lasting, with a tan/brown appearance.

The smell was smokey and malty, a perfectly inviting bock IMO.

The taste was actually very good, because it doesn't allow the malt to overwhelm with sweetness. instead, it's got a really consistent grain flavour coming from the malt and hiding soon after behind a delicate but perceivable amount of bitterness.

Appearance: light black with some garnet highlights. Clear despite the colour. The head disappeared as the beer was being poured. As there was almost no head, there was no head retention.
Aroma: roasted aroma of sweet malts and a touch of candy.
Taste: roasted malts and caramel balanced by herbal hops.
Mouthfeel: smooth, not so strong carbonation, low alcoholic strength and medium to light body.
Finish: medium length bitter aftertaste.

Overall: definitely not a Bockbier. The taste is acceptable although not great. Very disappointed appearance.

Poured from the 33cL can into a pint glass.

S: Some burned sugar and toast. Caramel malt backbone and some dark malts. OK but not very strong.

T: Almost as easy drinking as cola - which was the first flavor that sprang to mind when drinking this beer. It's basically cola, right down to the carbonation level and mouthfeel. There is also some richer malt in the back there, but overall cola with a hint of caramel and bread. Instersting.

Overall very very drinkable, although it doesn't drink at all like a beer. This is oddly enough a dark beer that could be refreshing on a hot day. A strange beer for sure, but ok I guess. Different from the style, but not too too bad.

Deep garnet verging on brown with beige lumpy head that laces well.
Malt syrup and maybe berry jam on the nose – cloys some - with a bit of toasted granola.
Some hazelnut, some dark toast, some blueberry skins but mostly just treacly malts over light hay hops.
Sticky toffee pudding and salted caramel linger. Light-medium, crisp, soft but a bit sticky.

“Negra Munich” on the can, so is this a bock or a Munich Dark lager? Lines up better as the later – more color than flavor. But not even really a good lager underneath. A lobotomized version of the style.

A: dark but not opaque- light behind shows a dark brown cola-like color. Very little to no head that fades to a lace, which stays.

S: not strong, a bit of malt but i'm not gettting anything else.

T: simple dark roasted malts, with light citrusy hops on the end. bitter lingers in the mouth a bit.

D: definitely very drinkable, could contiune for quite some time, though the end bitterness tends to build up if you're drinking it solo. Would be better to drink along side some quality spanish tapas.

S - Not much aroma comes out. Some toasted/slightly roasted dark malt. Maybe a touch of caramel/sweetness, but it is pretty thin.

T - The slightly roasted malt is upfront with a good dose of caramel malt. Sweet but not overpowering and a nice slight bitter touch. Malts had a fairly grainy taste to them.

D - Very drinkable beer. Provides some sweetness and some bitterness (although pretty minimal hop taste). On the lighter side for a bock, but it went down easy.

Notes: Had this in a bar in Barcelona while watching a game. It isn't quite a bock, or at least what I think as a bock, but rather blurs the lines with a schwartzbier. Maybe due to the weather in Barcelona, the bocks are lighter and more lager-like. Anyway, nice fairly tasty beer that was better than what I was potentially expecting in Spain.

Taste: simple dark roasted malts, bitter lingers in the mouth only a bit.

Mouthfeel: but very smooth and plesant

Can served into an Estrella Damm goblet in Ibiza, Spain. Reviewed from notes. Expectations were very low.

A: Pours a far better head than the bottled version: three to four fingers with nice cream and thickness. Retention is decent; about 2.5 minutes. Black/dark amber in colour.

Sm: Smells worse than the bottled version, mainly because it's so light. Lightly hopped barley and nutty notes.

Mf: Coarse and dry, especially on the finish. Dries out the tongue. Bleh.

Dr: Well priced but poorly made. Get the bottled version if you're going to try this; it's far better.

500ml keg from Cerveceria Canarias, Barcelona (€4.60):
Quite a basic dark beer that wasn't quite as strong or as pronounced as I'd been expected with the majority of the taste coming through the roasted malts & faint caramel that featured throughout. There was no sign of any bitterness or hops to the beer which sadly made it seem quite bland & basic but the light sweetness off the back of the caramel was at least somewhat enjoyable. It's definitely not a beer to go hunting for but it's always nice to check another beer off the 1001 list even if it's not a great one.

330ml can poured into a stein

not much in the way of aroma, perhaps some dark malts but not much going on in this department

dark malts at the beginning, definite sweetness as well, a slight chocolate note and bitterness of the malts comes at the end. fairly highly carbonated; a little thin perhaps for a bock.

overall, one of the best mass-produced spanish beers out there, however, perhaps this is damning with faint praise. still, i enjoyed it, quite drinkable.

Small bottle of 250 ml at home, poured into a snifter.
Very nice dark mahogany colour with a thin line of beige head that disappears fast too.
Aroma is malty with dark fruits and some light chocolate.
Very sweet on the taste, with a hint of alcohol, although ABV is only 5,4%. A bit tart too, with a short finish of light bitterness.
Full on the body with average carbonation.
Overall quite nice beer.