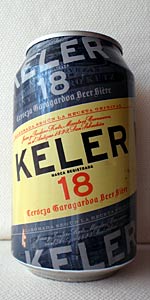 Notes:
View: Beers
Reviews: 6 | Ratings: 16 | Log in to view all ratings and sort
Reviews by ghawener:

as the euro lagers go, this is of astounding overall quality, and it baffles me that it is not more prevalent, here, and everywhere, this beer just tastes so appealing, easy, and universal to me, i really liked it for what it is, and despite the can seeming tiny in my hand (maybe because it is, or maybe because this beer goes down like water), its one of my favorite recent euro brews. i think these guys are underrated in general, but this is an all malt tasting lager to me with way more alcohol in it than most of these have, plus its priced super cheap, which adds to its appeal, especially in developing countries. highly charged on the bubbles, a solid grainy body and flavor, and a crisp and easy yet very unique and identifiable lager yeast strain that makes this dry but does not compromise its stature. i could drink some absurd amount of these cans as long as they were cold, like maybe 30 in a sitting, its that kind of beer, but it is way better and has a lot more character than most others in its class. really good, especially when measured against other international lagers in the same price range...

I spotted this cheapie in a discount market around the corner, so my expectations weren't to high in the beginning.

The body has a clear golden color. Intense fresh hoppy smell.
Tastes a lot like alcohol without getting too annoying - it is even warming!
Finish is spicy with a lot of hops in the very end.

All in all I'm positively surprised!

Quite the forgettable brew, not a pain but quite the characterless marketing ploy.

Presentation: 33 cl can. Diagonal name branding over a light cream stripe with a text-pattern grey background, which includes references to the graphic identity of the old recipe that it is representing. Text in Basque and Spanish making reference to the German brewmasters based in Donosti that gave inspiration to this take on a brew from the original 1890 brewery. Notes best by date (03/11), malted barley as an ingredient, and German method. Shows Alc. by Vol. (6,5%) Served in a tall beer glass.

A - Light yellow pour with a generous frothy head, good retention and some touches of lacing.

S - Light grainy nose, with a faint hoppy touch. Correct and forgettable, but with no offensive touch.

M - Light body with low carbonation. Feels to have some malty density in the palate but it is a slightly heavy water sense with such a small carbonated character, tingly in the finish trying to rescue it but rather insufficient overall.

D - It is so indistinct that one could be distracted and drink it. But actually it is very forgettable and there is nothing to it. It should be easy to find something more exciting behind any bar in the Basque Country or elsewhere. In fact, for such a heartless brew the unusually high Alc. might be the only gimmick going for it if that is what the crowd is expecting from it. Ultimately it is also a deterrent, this should be a session beer but instead it is a 6.5%!

Notes: Quite an aggressive and empty marketing ploy from Damm España, which actually seems to be their strongest asset... Opportunistic use of the reference to a Basque recipe created by German brewmasters in Donosti to launch a campaign stressing the Basque qualities of a product brewed outside the Basque Country by a macro brewery. Not that there is much else to chose from at the local level but there are far more genuine offerings in terms of their local kudos, such as Pagoa, than this one. Damm on this one has not even made a cosmetic effort to have a small brew plant in the Basque Country to save face, which even Heineken does...

As far as non-craft beer goes, Keler can't be beat. In my experience, no mass-produced lager or pilsener comes close in terms of flavor and mouthfeel (although Poland's Żywiec is mighty satisfying). Of course, compared to craft beer, Keler would lose a point overall, but on that scale, few big brands reach a 3 in my book. Even if it weren't so inexpensive, I'd still stock this 6% ABV "strong lager" as my house beer because it is more enjoyable than any commercial product I've tasted with an ABV of under 7% which is stronger than I like. The only brew I'd rate higher than Keler in the 330ml yellow can is Keler in the 200ml bottle. Depending on how long the beer has set in the can, it can pick up a slight mustiness that the bottle version avoids. But the bottled beer costs more per ml. Since this is my first review and I've not mastered the vocabulary of beer appreciation, I can only say the golden color is robust, a half-tone darker and thus manlier than US and Canadian beers, the aroma is nothing special but I don't pretend to have a champion nose, the taste is predominantly malty but fades to dry on the swallow, and the mouthfeel is the Best in Class, suggesting a craft beer more than a mass-market brew. For a more detailed discussion of Keler's attributes, I defer to the excellent eview posted below by StonedTrippin.