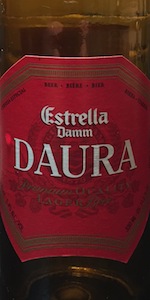 The pour is golden yellow with a fair amount of carbonation. The taste is a little different from your average Euro Pale Lager. The barley sweetness is not as pronounced & the cooked vegetable notes is weaker than usual for this style. The beer is more bitter than I expected it to be. In addition to, I agree with the dry bitter ending which was previously mentioned by another fellow beer reviewer. Well hey, at least there is a best by date on the back of the label. I have to admit that i'm struggling a little bit with finishing this beer bottle. The sweetness in this beer reminds me of those artificial Splenda coffee & tea sweetener packets that you commonly see in diners & donut shops. There is a date on the back of the label so I know the beer is not too old. All in alI, I guess I like my beer with gluten because there is certainly something lacking in this beer. On the bright side of things this was my first gluten free beer so I guess that it can get worst in this category. Cheers! C

Note: "Crafted to remove gluten"
Look: Clear golden body beneath a short head of white foam that fades steadily but leaves some nice lacing behind. Plenty of fine bubbles can be seen steadily rising within the glass.
Smell: Sweet grainy malt backed by subtle herbal hops.
Taste: As the aroma suggests, it's a sweetish beer upfront but it manages to balance itself in the end through a median bitterness and a healthy dose of spicy and herbal hops. It has a richer malt than most Euro lagers.
Feel: Medium in body and crisp with a standard carbonation level.
Overall: A fairly unique European lager but nothing to write home about.

T: bland; a little sweet up front; perhaps a touch of lemon; very mild bitterness on the finish;

O: boring, but not bad; for a gluten reduced beer, it's drinkable;

A drinkable if unremarkable lager.

Pours out light to medium gold in color. The head is white with minimal retention. Lacing is low and splotchy.
Lots of grains in the nose. Its also somewhat floral. Finishes grassy.
Taste is a bit sweet up from from the malts. Again picking a nice grainy taste. In the end you get a slight lingering bitterness.
The mouthfeellight, soft, with uplifting carbonation. This seems like it would pair well with bbq.

Frankly, the best of the GF beers that my wife has foisted on me.

Pours a nice clean look with a deep yellow color and an OK head that recedes fairly quickly. Nose is not impressive, but it’s drinkable on a hot day

I bought this because so many people I know were telling me how great this beer was, so I picked one up, and to tell you the truth the hype failed to match the quality. The taste is very plain, not much going on, the way it feels in the mouth is akin to water, plain water. Overall it was disappointing.

Pours a slightly hazy gold color with almost no head. Unremarkable smell very little is discernable in the taste I added a lime and it helped a lot. It's smooth and easy to swallow. Typical cerveza.

It pours a pale yellow with a thin head and the smell is of a sweet corn and some malt. The taste is sweetness of the corn and light malt. The saving grace is how smooth the taste is and how easy it goes down. This is early the most drinkable beer I have had. Mouthful is a little watery but still good. Overall. I really enjoyed this one.

The aroma has a mixture of toasted pale malts, bread, corn, and grass.

It is gluten-free so this beer has little character in the taste beyond a breaded malt note, low to no sweetness, but a slightly dry bitter ending.

First let me say this was the best tasting GF beer I've tried. Only its not GF as as stated. I was diagnosed 5 years ago with Celiac, was a mess, weight loss. Biopsy conformed a Marsh 3B, very bad small bowel damage.

I went GF and had a another biopsy 6 mos later which showed an almost completely healed bowel. It was then I went in search of a GF beer and found Daura. I was surprised that it actually tasted like beer. It is after all made with Barley (protein) removed according to estrella damm brewers and listed as below 3ppm (Canada) in the US they cannot label it as GF.
Fast forward a year. I had been drinking Estrella Daura and been very strict with my GF diet. I contacted my Gastro doc for another biopsy to evaluate my small bowel to see If I was completely healed now. To my surprise the biopsy showed "partial healing" in fact this biopsy was poorer than the one i had 6 mos after going GF drinking no beer at all.

I researched everything and came to the conclusion it was the Daura, I had seem independent tests done on many GF and non GF beers testing the Gluten levels and Daura came in at over 20ppm!!

I tried contacting Estrella, emails no reply, try the phone for get it. I then contacted my Gastro doc and she suggested I go off the Daura for 6 mos and re do the biopsy so I agreed.

I had my biopsy after 6 mos free from the Estrella Duara. My small bowel biopsy was "normal"!!! as in no indication of any damage. Daura is NOT gluten free!!!! The fact that they won't respond to me, the fact that independent testing has revealed over 20ppm, and the fact that the U S of A won't allow Daura to label itself GF in the U.S speaks volumes. I believe the label say Gluten reduced??? in the U.S.
Daura is NOT gluten free!!!!

I've had several gluten free (GF) or reduced-gluten beers, and this one is a welcome addition to the lineup. It is a classic Euro lager that avoids the fate of many GF beers in having its taste twisted beyond recognition by whatever process is applied to remove gluten. It is fairly lightly flavored, but is nicely balanced. Color light gold, head white. Ample, active white head, and good carbonation. Nose a bit mild but was an honest promise of the light lager malt and hops to come. Flavor was a straightforward pale lager profile, refreshing and very drinkable. I would enjoy these aside from the GF aspect. Both hops and malt could be more potent... but that can be said for a lot of pale lagers. And sometimes that light profile is what people want.

I tried doing some research on Damm's website to ferret out if this is the same beer. (I couldn't find the English button, so I was reading in Spanish is for several minutes and this is such a lifestyle site that I got bored.) So I'm surmising they re-launched this beer's advertising saying that it is "crafted to remove gluten". (This is 5.4% as is the label of my bottle.)
Is this the same beer I had in 2012 while in Spain? Hard to remember !! So, hard to be 100% sure. But, let's go with that Damm may have removed some gluten, but that they do so more for that specialized market.

To me, Daura is an average Euro pale lager. I like the maltiness and the balance of just enough hops. But, the mouth is thin. (I don't know if that is the gluten removal.) But, I do know that I don't need to have Daura again.

There's a little bit of sweetness to it but it's also bland at the same time, so it gets boring quickly. I'd drink it again but I wouldn't pay $8.99 for a 4-pack again.

Purchased during one of those 'oh, I haven't tried this' moments. I don't regret the decision, pleasant stuff, but all in all just another Euro pale lager that's clean, crisp, mildly malty/hoppy in a happy go lucky way just waiting for the party to start.

Good enough to drink but not repurchase at import prices.

330 mL bottle purchased as a single at the LCBO; best before Nov 2016 and served well-chilled.

Pours clear-golden yellow in hue, spawning roughly one finger of loose, soapy white head that is in a hurry to be somewhere else. A bubbly collar of thin foam remains, in addition to some very scant lace. Light sulfur/skunkage on the nose, along with notes of pale malt, cereal grain sweetness and grassy hay. Normally I'd say there's nothing to get excited about so far, but for a GF beer this smells remarkably... well, normal.

Well I'll be a monkey's uncle - it tastes like a regular Euro lager, too. Grainy pale malts and cereal grain sweetness make up the bulk of the flavour profile, with minor notes of apple skin and hay. Finishes rather dry, without much of an aftertaste. Not significantly better (or worse) than this brewery's standard 4.6% export lager. Light in body, with moderately prickly carbonation levels and a crisp, refreshing mouthfeel. Very easy to drink.

Final Grade: 3.18, a C+. If I had been handed a glass of Estrella Damm Daura and given no other information about it, I don't think I'd ever come to the conclusion that it was gluten free. In fact, I'd probably guess that it was a Polish lager, since it vaguely reminds me of stuff like Tyskie and Warka. Daura has none of the weird, gross vegetal off-flavours that you'll find in GF beers brewed with sorghum or other non-barley/wheat grains. That being said, I can't be too effusive - because taken purely as a pale lager, it's mediocre. But it's quite drinkable, and in the world of GF beer that is (sadly) more than enough to put it ahead of the pack. Highly recommended for celiacs.

Clear golden color with white head. Aroma has some nice grains but also the bright vegetal/fruity character you mostly get in low alcohol beers. Taste starts grainy, slightly sweet, you definitely get the adjunct grains feel. A bit of alcohol too. Finish is balanced, you get some hops and bitterness and the aftertaste is dry. Body feels medium and well carbonated. Overall it's quite clean, without any major faults. Taking into account it's gluten free, I think it would be a good option for some people but for the regular drinker it's not something special.