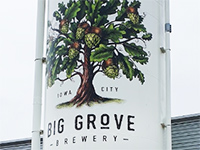 Awesome place with huge courtyard. Two bars with many glass overhead doors opening to courtyard. I came during epidemic, I am sure this place is awesome when fully staffed. The brewer came out to talk to me as he probably saw the look in my eye that BA brethren all have. Great beer and menu. Great service. Glad I ventured out.

Night and day from the original brewery in Solon, this place is ten times as big. Just a massive, modern industrial space, planned out to every last detail. Less cozy than the original but no less impressive.

The brewhouse is visible through glass from the rectangular island bar and dining area. There’s a huge patio, and an indoor stage for live music. During the week, lunch was self-serve at the kitchen window. When we walked in, the brewer was behind the bar and struck up a conversation about Scratch as I was wearing a Scratch t-shirt. After we ordered food, he was in the brewhouse monitoring the mash tun. That was pretty cool.

Beer selection was good, they rotated a few seasonals, had a nice APA and fruited berliner. They offered beer in flights and individual tasters which was nice. Also cans to go of their latest stuff. I’d sampled Whiskey Little Secret at the Great Taste a week earlier, but it wasn’t on here. The bartender mentioned he had a bottle from the last release. Really good stuff if you can find it.

Food was good, we had the pork belly tacos and mac & cheese. Both dishes were unique and freshly made. The fried cauliflower was more sauteed than fried, it was batterless, but the homemade buffalo sauce was great with it.