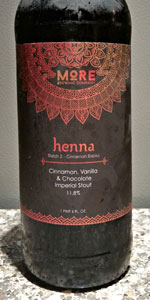 This has a deeply decadent cinnamon element that brings to mind Cinnabon, with distinctly unique notes of black licorice. The slick, medium-full body also delivers charred, nutty roasted cacao intermingling with root beer before a smoky exhale and a sticky finish.

Cinnamon Babka reminds me of a Perrenial Abraxas, sans peppers - the cinnamon is quite powerfully present in the nose and in the taste, but isn't so overwhelming that it hurts. It's certainly not subtle, but it's within the pleasant range. For my money, I'd rather have Abraxas - but Henna is nicely balanced, has a slightly fuller, richer mouth feel, and a very nice nose.

Very good - but not what I had hoped.

This one pours a very dark black, looks glossy, with a small head, and not much lacing.

The cinnamon character here is absolutely killer. It doesn't have that overly sweet cinnamon bun feel that a lot of cinnamon stouts have. It's earthy, spicy and very warming. I know baklava doesn't have cinnamon in it, but the flavors kind of remind me of it. There's a nice balanced level of vanilla, and it's nice to see that the base stout itself is tasty- there's some great roastiness to it

This is medium bodied, creamy and pretty smooth, with a normal level of carbonation.

This is my first beer from this brewer- from either More or Ram. He's clearly very talented at this style of stout.

If this beer was released before Double Rainbow I think the reviews would be more favorable. It's a very good beer with typical Henna mouth feel and fudginess but the cinnamon and vanilla do not shine through like the adjuncts in other batches of Henna.

Poured from a 22oz bomber into a snifter. Pours a thick brown body with a small brown head that reduces quickly.

Aromas are heavy chocolate-vanilla with some cinnamon in there, fudgy. On the tongue is a nice medley of chocolate, vanilla, coffee, cinnamon in the background and on the finish. The finish is roasty. Mouthfeel is spot on, super thick and fudgy but easy to drink.

Great beer. Tasted best at room temperature when the cinnamon started to come through.

This beer was just an average stout imo... not close to the 3-4 RAM stouts I've had from Shaun. I have not had Henna batch 1.

Okay mouthfeel but not on the same level as the RAM offerings. Nice cinnamon flavor but I didn't get much else. Good beer but not great.

From bottle into Henna glass, on the day of release.

Pours pitch black with very little caramel colored foam around the edge of glass. That dissipates and it's basically just a pitch black liquid. Aroma is wonderfully cinnamon, chocolate and vanilla. The taste is a strong cinnamon forward cinnamon toast crunch mulched cereal in form of a beer. Little roasty too. As it warmed, the chocolate came out to play noticeably with the vanilla rounding it out well as you finish the sip. The vanilla added a smooth, creamy feel. Just like rest of Shaun's beers, the mouthfeel is great.

Relative to Henna: Double Rainbow (batch 1), I prefer the Double Rainbow ... for now. The only reason I say that is because I preferred how the strawberry was incorporated versus the Cinnamon Babka (batch 2) which has a very strong cinnamon forward presence. I do think once the cinnamon mellows a bit (even just a month or two), the Cinnamon Babka will be right up there.

Henna: Cinnamon Babka from More Brewing Co.
Beer rating: 95 out of 100 with 34 ratings