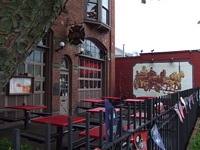 The OG location is inside of Tacomas historical Engine House No. 9. They produce some of the best what most would call "sours" in the PNW. Their onsite and to-go beer list is outstanding.

Visited 10/28/2016 2:00 pm not a lot of people
service: can be more attentive
Selection 4-5 E9 beers, a lot of guest beers
Value: expensive compared to other breweries in the area

2016-08-07
I'm surprised I haven't reviewed this place before. I've been here a few times with my family. They have a nice brunch on the weekend, their food is good. There beer is sometimes no more than solid and sometimes quite good. I think they do a better job of sours than of standard styles. Their selection is excellent -- they have a variety of interesting to amazing guest taps and a very good bottle selection available as well. Prices are reasonable, service has been good, generally.

2019-12-30
Since the last review, I've visited several times. I think E9 has upped their game -- they make good to excellent sours, and they have solid "regular" beers. I visited for dinner with a friend a few days ago and we mostly treated ourselves on some amazing guest taps. I had Quintuple Barrel Big Bad Baptist and Founders French Toast Bastard, for example. This place is a good restaurant, good place for normal people, and I'd definitely recommend it to beer nerds. I bumped up a couple of the scores.

This review is old, so take that for what its worth.

We were there late before closing, and it was pretty dead. I can't tell if the firehouse decor is funky and cool, or just trying too hard and coming across as cheesy. Maybe a mix of both.

I got the taster flight, and the beers were standard across the board. No standouts.

Glad I checked this place off the list in Tacoma. Other than a festival, I would go to about half a dozen other beer places in Tacoma before I came back here. Worth checking out, but probably not worth a repeat visit.

Cool reuse of an old neighborhood landmark. If driving down 6th, it won't be very obvious until you actually turn north onto Pine St. Near here, there is a current Fire Station along 6th called No. 9. Unless hanging out with actual firemen and EMTs is your thing (not judging), it's not where you are heading. If you know where the Red Hot is, that est. can be a useful landmark, as it's kinda kitty-korner to No.9, and it's relatively easy to walk back and forth between the two.

Only been here once, in early fall of 2011, the last time I passed through Tacoma. I stopped by here after having lunch and a couple of beers at the Red Hot with the excellent local BAs Libbey and Lordkrystic. I knew I wouldn't be able to drink much else,as I had to get back on the road and continue down I-5 to my brother's place in Oly, so I made my way to the bar area and had one beer while giving the place a brief look-over.

The bartender was friendly and efficiently quick at the same time, and was only too happy to get me a menu to look over even though I made it clear that I wouldn't be ordering anything that day, and immediately responded to my request that she ring me up as I wanted to be able to leave as soon as I was done.

I had a Tacoma Brew. It was a nice, low impact, "lawnmower" beer, and it was pretty much what the doctor ordered. Not a flavor bomb, but well made and it served it's purpose as an intro to the brewery. There was a pretty good array of their beers available. What really impressed me was that they also had a good ten or so guest taps, all of which I remember as being quality beers. It was definitely not like when a place has to put on guest taps to cover up the fact that they were out of their own beers or to get good beers on in a style they couldn't provide. It says a lot about a place that they have the confidence to have that many guest taps in addition to their own beers.

They had a full menu, plus a kid's menu that a friend of mine in Spokane - who visited No.9 separately - called a godsend, as he and his wife were able to have good food and beer while their kids had meals they were happy with. I didn't eat there, since I had just had an epic specialty hot dog at Red Hot courtesy of Lordkrystic, but the menu looked promising.

Next time I pass through T-town, I will definitely stop by here a little longer, and try more of their beers.

We visited EH#9 last weekend on a tour of all of the Tacoma breweries. Sadly for all the others in town, this was our fist stop, so everyone else paled in comparison.

EH #9 had everything we would want in a beer location.

Cool funky locale? Check. They're located in an old firehouse that currently sits on the National Register. They manage to historic without being outdated, and have plenty of televisions tuned into sports events. Oh, and steel tip darts, no plastic ones!

Great beer selection? Check. House beers we tried were all very good or better. But the guest taps included several in the top 250, plus some that I just haven't seen elsewhere. They also have a cooler with some tasy and difficult to find selections. A prior reviewer mentioned that they don't have an updated list, which is true. I met the beer buyer and he was pretty helpful about knowing what was stashed in the back. An updated list would be helpful though.

Good food? Check. Selections range from typical pub fare to pasta and pizza items. We had lunch and weren't dissapointed. The food bill was ~$20.00 for two.

Good service? Check. We got a few freebies by showing interest. The bartender was also attentinve and seemed to know quite a bit about the selections on hand.

Loved this place and have already been back once. Will be many more times in the future, I'm sure.

My first visit to this Tacoma craft beer hotspot. It will certainly not be my last.

I really like the layout and feel of EH-9, and I like how the owners have retained the feel of an old fire house. The place has high ceilings in the dining area, lots of wood all around and several TV sets in the seperate, back bar area, showing various sporting events. The vibe here is informal and quite relaxed, and this struck me as a very comfortable place to hang out with a beer or three.

The beer selection was pretty impressive on this day, consisting of 24 beers on tap and 3 beers on cask. I think they had around 5 or 6 house beers (brewed on premise), but with guest beers this day including duvel, La Chouffee Nice, Maritime Jolly Roger, etc. I sampled the house IPA, which was well made and an easy to enjoy IPA. Service was pretty good. I didn't get the impression that the staff here were all that knowledgeable or well informed about the beer selection, but they were friendly and I never had to wait long for a refill. Prices were likewise pretty reasonable. I got a bottle of lagunitas sucks and a schooner of the IPA, and my cost was right at $7 or so. Didn't try the food, though the menu was large and extensive.

I spoke to a local sitting next to me, and my understanding is that the qaulity and quantity of the beer selection and food menu have both improved considerably under the new ownership. Apparently the place was bought out 5 or 6 months ago, and I heard several folks mention that the place seemed cleaner, more open and better lit. In any event, I thought this a very good place to hang our and enjoy a beer, and there's no doubt this will not be my last visit here.

Update from 2/14. I get up to Tacoma pretty often now, and E9 is one of the closer and better spots in the area. So I visit pretty frequently. I do like this place, and the positives here remain pretty positive (fairly large and diverse tap list, improving house beers, nice atmosphere with several TV's tuned to various sporting events), but the negatives haven't changed much either. E9 has an online tap list, but I have no idea how often they update it, as it's never current. Same with the in house tap list. Invariably the list won't be current, and the bartenders aren't always all that great about telling you about the current list. It's the same with the bottle list here. E9 has a pretty decent bottle list, including a pretty excellent "special bottle list." (with things like red poppy, vintage doggies claws, FW 15 and 16, Older Viscousity, etc.). Except like the draft list, it's anyone's guess what's actually going to be available in the cold box. So it can be a bit annoying when your first couple of draft selections are out, as well as that bottle of 2011 Doggie Claws you had your eye on. Service continues to be a weak link here as well. Most of the staff are friendly enough (the bartender last night was a jerk, but that's pretty rare), but they know next to nothing about the draft list. If you ask for an IPA, they can help you, but questions any more complicated than that, can sometimes lead to some surprising results. While sipping on my glass of hop venom, I overheard that they also had armored fist on tap (it wasn't on the draft list of course). The bartender told me (and another patron) that this beer is a stout or porter style of beer. I advised him that it's actually a CDA/Black IPA, but it was pretty clear he had no idea what I was talking about (and could care less). There have also been a couple of times when the GF and I have walked out due to "slow" service. At least the waiter was nice enough to tell us it would be over an hour for us to get our appetizer, but it just seemed odd that the place was short staffed during a weekend lunch hour. No explanation was forthcoming from the waiter, so I still have no real idea what the problem is/was. Just one of those things that seems to happen here from time to time.

Anyway, I consider the negatives here something I can overlook, but it is something to be aware of, especially if one is a first time visitor. Cheers!