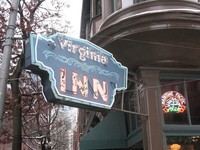 View: Place Reviews
Reviews: 8 | Ratings: 9 | Log in to view all ratings and sort

Housed inside a building which claims to be over 100 years old, The Virginia Inn sits in a relaxed area that's not too far from the tourist trap of the Pike Place Market. I choose to sit outside on the small sidewalk patio they offer, and did see a good crowd on hand enjoying drinks and lunch together. Of course, this would be a prelude to my actions, and that would include a bite and beer. Inside, the tavern looks and feels like a bistro.

10 different taps plus a few bottles available regarding beer. Beers from Old Stove, Trumer, Georgetown, Hale's, Payette, Silver City , and Boundry Bay on the draft list at $6 per pint. As I often find myself now, I become happy when I see my beer served in anything but a clunky shaker pint, which was the case at the Virginia Inn. To go with the beer, I chose from their little menu moules-frites, which were served with huge black mussels and hand-cut fries.

Not a beer centric place, although I certainly enjoyed my time here.

The Virginia Inn is just a few blocks from my office and I stopped in yesterday for a few pints and some dinner. It's got a pretty great vibe, neat old wooden booths and a classic bar arrangement, with outdoor seating on a nice day. Another reviewer noted the people-watching; being so close to Pike Place Market, there are tons of folks wandering around.

The beer selection was pretty small; 9 beer options plus a cider. Mostly these were Seattle breweries, and the offerings were well-curated, but 9 taps just not that many these days. Service was good and I thought the food was great. I had fish and chips, though -- kind of hard to screw up. I will totally return to Virginia Inn because of its handy location and food, but as a real beer destination there are better places in the area.

Whenever I go downtown to 'The Market' I usually visit the Virginia Inn for a couple of pints. They have these nice marble tables on the sidewalk and it's a great place to hang and people watch. The tap select is average, Manny's, Bridgeport IPA, 9lb Porter, New Belgium, Hale's Kolsch, Guinness. The food looked good but I'm there for the beer. They have a full bar and the inside is beautiful oak booths. Not a BA beer destination but a place to hide from the tourists and have a quick pint with a friend.

I get to Seattle on a fairly regular basis. If I have an afternoon free, I love to go Matt's at the Market for lunch and then walk over the Virginia for a few beers.

This is a small tavern with some decent beer offerings and a nice little terrace in the front. If you can get one of the two tables furthest from the door, you are blessed with a nice view of the water and can watch people huff up the steep little hill.

As others have mentioned the bar stools are fastened to the floor, did they have a rash of thefts, is it a safety device so you don't knock one over or do they do it for some other reason?

I've always had good service here. It's quick but not hovering, professional more than overly friendly. I like it.

They offer about 8 to 10 decent draft choices. While not a huge selection, it seems to well thought out and always has something I haven't tried before.

Worth a stop if you in the neighborhood.

quiet little bar (at least on our visit) just a few blocks from the market.

There was maybe 10-12 beers on tap, with nothing really too fantastic. I had the Boundary Bay Inside Passage Ale and the lady had the Hale's Cream Ale. Some of other choices were mediocre locals (mac and jack african amber, seattle lager, mannys pale, etc). I would have to imagine you can find a selection like this just about anywhere in seattle.

Service was just fine and food was not consumed.

If you walk by, pop in, but i certainly dont think it should be on a beer-destination list for a BA visiting town

I was on my own and on my way out of Seattle, but decided I should eat dinner in the city rather than eating at the airport (a wise move, in retrospect). I had passed by the Virginia Inn Tavern a few times during my weekend explorations, but hadn't given it much thought. They had a menu on the window, and the food looked a step above normal bar fare, so I figured I'd give it a try.

I pulled up a seat at the bar (figuratively speaking; the barstools are all fixed to the ground) in front of the taps. They had 10 or so local brews and no macros or nation-wide micros; I was glad to see the nod to the northwest. I had a Hale's Troll Porter, which was absolutely fantastic. Just the right amount of warmth for a cool Seattle pre-fall day.

The waitstaff were all very friendly and talkative, but would leave you in peace if you were reading a paper. The music was mellow and low-key, which mirrored the overall vibe.

The food selection matched the beer selection - a small menu, but what they had was top-notch. I ordered the daily quiche and a salad, both of which you could tell were hand-made that day rather than mass-produced or thawed.

I'll certainly be visiting the Virginia Inn Tavern for a pint next time I pass through downtown Seattle.

Walked into this place looking for an afternoon pint after walking the Belltown area. All the outside tables were occupied so we grab a stool inside. Plenty of tables and about 10 barstools which are bolted to the floor. Old style interior and several fans were blowing since they did not have air conditioning. Ugly quilts hung from the walls, and they were for sale for ungodly prices.

Didn't eat any food, and didn't converse with any bartenders beyond the order. Neat place to visit while walking around 1st Ave.

Good location in the heart of the city, just up from the Pike Street market, the Virginia Inn sits on a corner, with outdoor seating in front and glass across the 1st Avenue side and curving around some 1/3 of the way down the right wall. The place is very artsy, with paintings and photos hanging everywhere. The establishment is long and thin, with the bar covering most of one long wall, with some ten or twelve vinyl stools. A total of about 50 people can find seats here. Very bright and pleasant on a sunny day, it was about 1/4 full on a Wednesday afternoon in mid-June.

Twelve taps behind the bar, with craft brews on 10 of them. Nothing spectacular or unique, but a good selection of local brews. The bartender was friendly, if not attractive, and reasonably knowledgeable about the beers. Sure, I'd go back.

Virginia Inn Tavern, The in Seattle, WA
Place rating: 3.78 out of 5 with 9 ratings