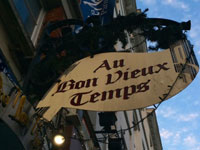 View: Place Reviews
Reviews: 28 | Ratings: 43 | Log in to view all ratings and sort
Reviews by TheLongBeachBum:

Right next door to one of Brussels hidden gems, the A L'Imaige Nostre Dame, is yet another  the Au Bon Vieux Temps. Very much like its neighbor, but with a slightly smaller beer list, nevertheless, it is still worth popping in here for a beer.

The alleyway is called Impasse St.Nicholas, and this too is also accessed from Rue Marché aux Herbes. A short 3 min. walk from the Grand Place, but just a 30 second stumble from, L'Imaige Nostre Dame.

Another genuine Old Brussels Café, dating from the 17th Century I believe. Once in the alleyway, windows covered in old-style ornate steel grids make you feel a little uneasy, but they are there to protect the ancient windows, rather than prevent Burglars. The entrance, itself an archway made from brick & stone, is to the right of a larger main stone archway. On a night-time, this area is lit by some fairy-lights which give it a rather Xmasy feel.

Once inside, it is dingy to say the least, and strong deep medieval wooden odors invade your nostrils. This Café has an incredible dark timber interior that has many exquisite wooden carvings. It is quite compact and only accommodates a few small groups before it gets full.

The beer range is around 30, and it has many solid Belgium classics worth trying. It is another one of those places that is worth visiting to absorb the real Bruxellois Café, as it used to be. A genuine interior makes up for the rather pedestrian beer list  but nonetheless, you will find a handful of Belgium Classic Ales that are worthy of at least an hour, or two, in here.

Whilst I would be the first to admit that you could miss this one out if you were really pushed for time, on a tight schedule and/or craving rare beers; but it would be a desperate shame if you missed this Café. It would especially be a shame if you are already visiting the nearby and excellent La Bécasse for its Lambic Doux, and then the L'Imaige Nostre Dame, which is literally next door, for the unique Bourgogne des Flandres. If you do, then you should allow yourself the reward of re-acquainting yourself with one, or two, of the Belgium Classic Ales that you have no doubt had before, but in a high quality, genuine 17th Century Brussels Café atmosphere.

Out of the ways hide-away place with ancient decor and style...solid selection of Trappiste Beers including Westvleteren...

Came here on a Monday night quite late on and it wasn't too busy, about 8 or 10 others in the bar. The menu was quite small with nothing but Belgian bottles available (inlcluding Westvleteren 12 for 15€, cheaper than most nearby shops in Brussels). Prices were perhaps a touch higher than other Belgian beer bars but the place was worth a visit for the carved wood decor. An interesting place and somewhere I might pop into again if I'm back at looking for Westvleteren.

Visited on a Tuesday afternoon in April 2017 after spending the morning at Cantillon. The place was empty except for the bartender and three other people. It goes without saying that I visited during a slow time.

This place looked and felt like what I imagine as a classic Belgium beer bar. With the old man sitting next to me singing along with the radio, I could envision myself in another era. Come for the Westy and the Vibe.

V –You have to walk down an ally way. A great approach to a small place with about 15 tables. Dark décor but bright enough lighting. Loved the décor, including the stained glass, the fireplace (with an insert), great hardwood unfinished bar, lots of beer signs. The paint scheme with tile and wood make the place feel more homey than beer bar. 4.75

Sel – Nothing on tap. About 15 bottles limited to Belgian beers and Trappists including Westy 12. I had two Westys – that beer was so good! The Westy was 15 EU. 4.0

Ser – Fine service. Bartender spoke limited English and I speak no Flemish and less French than the Bartender spoke English. But she was pleasant and when I communicated that I needed to charge my phone she was more than happy to find a plug. We had a good laugh when she accidently charged me 1,5 EU for my Westy. Not sure to what degree she had any beer knowledge, assuming very little. 3.75

Q – No complaints. The bar uses labeled glasses most of the time. 4

This is a small bar tucked away in an alley, with barely a recognizable sign, but in the heart of Brussels near la Grand Place.

No taps; all good bottles of good Belgian beer: Diekirch, Stella Aux Dieux Temps, Lindemanns, Leffe, Duval, Chimay, Karmeliet, Westy 12. 25 bottles only and nothing rare, but it is worth visiting just for the atmosphere and the décor of this medieval bar.

The gruff-but-nice bartender pours your beer with such finesse! I’ve never seen a more perfect head in a beer.

This bar is in the Centre of Brussels and easily accessible.

Love this cosy little 17 century bar tucked away in the centre of Brussels. Beer menu has all the Belgian classics on it, including the much hyped Westvleteren 12. The Spanish lady that served us was extremely friendly and she took a bit of a shine to my girlfriend (both speak Spanish and had the same shoes on!) we visited most days whilst in Brussels for 5 days. If you like Trappist beer and old friendly little places with a lot of atmosphere this is a must visit. The only reason I scored the service as 4.5 and not 5 is because the beers are served a little on the cold side. Only other thing I'd change is its location - closer to me so I can spend more time there!

Go for the vibe, and the 12 € Westvleteren if you've never had it. I doubt much has changed in the place since the mid 1800s. Beautiful interior with lots of carved wood and stained glass. Tiny, space for about 30 people. Small but respectable bottle list and some taps. Service is standard for the city.

A cozy, quiet, old bar that is stumbling distance from A l'Imaige Nostre Dame. Ornately carved wood everywhere, beautiful stained glass windows, warm lighting; this places has atmosphere in spades. The crowd was a little older the two times we stopped in, and seemed local & friendly. They have a couple dozen beers available (including Westvleteren 12 for, I believe, 12 euro) with a good variety of traditional styles.

Just got back from brussels last night. While this wasn't my favorite place (check port noir on a night with music) we did get some cool local info from a pensioner who is a friend of a friend. The stained glass to the right of the bar is huge and depicts Saint Michael slaying satan who is in the image of a dragon. On his left is a female saint - Saint Gudula. Apparently the locals insisted she be sainted back in the day. Church by same name is also nearby. As others have mentioned Westvleteren is available for 12euro. Other choices may be better but if you've never tried it you can at this bar. Happy hunting.

This is a MUST. It's down an alley and looks like nothing from outside. The brick over the door says "1689" and the experience probably hasn't changed much since then. Inside is a very cool tavern with maybe a dozen or so tables. A great relaxing stop to enjoy a pint. Somehow, this place has a connection to Saint Sixtus Abbey and can keep Westvleteren on their menu! For those that don't know, the Westy monks don't produce for profit and only sell their excess - so it's a rare find! The visitors were a mixed bunch, as everywhere in Brussels, but all quietly enjoying a chat and a brew. I did the same with a Westvleteren 12. The friendly bartender poured it from a plain brown bottle (that's how it comes) and matter of factly flipped me the cap so I could see the Abbey logo. It's now a prized possession, as is the memory of this great bar.