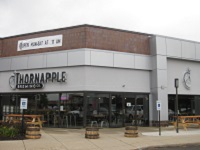 Rated by Phoodcritic from Michigan

3.73/5  rDev -4.8%
vibe: 3.75 | quality: 3.5 | service: 4 | selection: 3.5 | food: 4.25
Maybe a bad time to rate this place as COVID-19 is still affecting business to a significant degree, but that is taken into account.
Sparse crowd, even with only 50% seating available there were many open tables. This affects the vibe obviously, which was subdued.
They had a reasonable selection of beer and seltzer and cider and wine, but we stuck with the beer. The three I tried (Brown Eyed Girl) an English Brown, (Stars and Stripes) nitro stout, and an extra special mild I forgot the name of.
We ordered dinner which was excellent.
So, underwhelmed by the beer and impressed with the food. Too many places do both well for me to want to return soon, but I did find out (while asking the waitress why the Belgian Triple tasted and felt like a cider) that they had a new brewer on staff.
Okay, I’ll wait until said brewery is no longer new and try again.

Thirteen beers were available (including a grisette) plus there was a guest cider. The brewery is also a winery that makes 4 wines and a mead, plus three soft drinks. We had already had several beers from a previous brewpub visit elsewhere that day, so we needed to limit our intake and chose a sampler flight of only 4 of their beers for evaluation. Each was brewed to its respective style characteristics, except that we felt that the yeast esters were a bit strong in the Treyway Belgian Trippel. None of the beers was overly exciting, but the Salty Caramel Brown was notable.

The food menu was mostly pizza and appetizers, plus a few desserts. We ordered a couple of apps for our snack, and they were very good, to the point that I included a food score as part of this review based on those two apps. (If I can do and evaluation all 13 of their beers based on 4 samplers, I can evaluate their entire menu on a minimal tasting too. But consider that a caveat that comes along with this review.) We liked this place, and we'd like to return someday when we are in the area again.