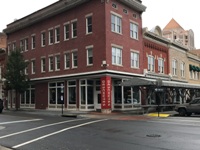 4.33/5  rDev -0.7%
vibe: 4.25 | quality: 4.5 | service: 4.5 | selection: 4
Very spacious and in a great location in downtown Roanoke. They had about 15 of their beers available on tap, including some one-offs and things you won't find in their distribution market. They also keep all of their regular offerings available for purchase to to in 6 packs, as well as some 'cellar reserve' bottles as well. Staff was friendly, I would definitely go back.
Nov 21, 2020
More User Ratings:
Rated: 3.83 by gabe71tx from Virginia

4.39/5  rDev +0.7%
vibe: 4.25 | quality: 4.25 | service: 4.5 | selection: 4.5
Very cool and spacious taproom in renovated downtown entertainment district. Long bar at one end seats 15 and some tables spread out about the room. Very much a local vibe. I believe there were 18 assorted beers on tap, including some tasting room only offerings. Friendly helpful bartender. Excellent beers. Great place.
Sep 19, 2018
Rated: 4.77 by jbarry3000 from North Carolina

4.8/5  rDev +10.1%
vibe: 4.5 | quality: 5 | service: 4.5 | selection: 5
Stopped in about 1:00 on a Tuesday. Place had a modern feel to it. Lots of neat looking polished wood. Nice open and airy. Must have had at least 15 taps of Deschutes. Half the space was dedicated to merchandise and bottles to go. Staff was all very friendly. I really enjoy Deschutes and was thrilled to get so many of their offerings on draft.
Apr 25, 2018
Rated: 4.47 by oberon from North Carolina

4.4/5  rDev +0.9%
vibe: 4.25 | quality: 4.5 | service: 4.5 | selection: 4.25
I visited Deschutes' tasting room in downtown Roanoke VA on a Saturday at opening (1 PM). The taproom had a clean, modern design that was nicely counterpointed by the use of old, reclaimed wood to frame out the backbar, and was scrupulously clean. The interior had a cohesive feel due to a lack of distracting wall decor and the use of consistent, unbroken wall color throughout. The color was a fairly cool grey, but the copious sunlight coming in through the full-length windows kept the feel light and airy. The mid-sized bar seated about 30, and there was ample seating inside for plenty more. There was a single table outside; this may have been so limited because it was market day.

We arrived just before opening on a busy day- there were lots of vendors set up along Market Street for what I was told is a weekly, year-round "market day". We were among the first customers; within ten minutes the taproom was half-full, and within half-an-hour it was filled to capacity with people 2-3 deep at the bar. The crowd was youngish, enthusiastic and knew their beer, the touristy market outside notwithstanding. This is obviously a popular craft beer destination in Roanoke; as a result it got noisy (but not too loud) as it filled up, the clean walls and open design doing nothing to mute the crowd noise.

The taproom has 24 taps, all of which were in service when we visited. Styles were diverse, but definitely IPA-heavy (eight). Flights of up to six 4-ounce pours were available; six of the taps were Reserve Series beers that were not available as part of a flight. The six beers that I tried (Pinedrops IPA, Sagefight IIPA, Fresh Squeezed IPA, Hop Henge IIPA, Inversion IPA and Obsidian Nitro Stout) ranged from solid-plus to great; I ranked the IPAs in the order listed. Proper glassware was in use for full pours of the various styles, and was rinsed before being used. Both growler fills and beer-to-go were available.

Staff was friendly, efficient and both knowledgeable and enthusiastic about the beer that they serve. They took the big, early push in stride.

While the taproom does not serve food, I will point out that there is an amazing burger joint across the street (Jack Brown's Beer and Burger Joint) that makes a great pre-taproom stop.

Reviewed by TheRougeBastard from North Carolina

4.18/5  rDev -4.1%
vibe: 4.25 | quality: 4.25 | service: 4.25 | selection: 4
Stopped in on a rainy Saturday afternoon, roughly around 2ish, and the place was already hopping (of course, it just opened a few days ago). They have the complete Deschutes line-up on tap, and most folks seemed to be ordering flights as they've only recently (last year or so) started distributing locally. Service was pretty quick even being busy. Don't if they have plans for food, but there are plenty of options near-by so not really an issue for me. I had their seasonal Hopzeit autumn IPA and Mrs. Bastard enjoyed their Pacific Wonderland lager. Purchased a growler of Hopzeit to go...foresee many visits here when visitng the area!
Sep 05, 2017
Deschutes Brewery Tasting Room in Roanoke, VA
Place rating: 0 out of 5 with 10 ratings