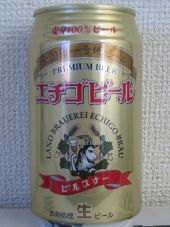 Pours clear golden with a smallish head and not much carbonation. Smell is malt and sweetness.

Mouthfeel is thick, sticky. Overall...it's OK for a pilsner, bordering on malt-liquor sweetness.

The classification is right, it is a German Pilsner, it lacks the flowery hoppiness of the Czech Lezák, instead it is bitter and uninteresting. The appeal is that it was made in Japan with perhaps much more attention to detail than the German original, resulting in a good quality beer - though not my favorite type, still enjoyable.

350ml Can from Liquor Mountain, Kyoto, Japan (¥246):
Very disappointing stuff from Echigo, I was expecting a lot more from this one given the fact that their 90 Days Stout wasn't all that bad. The beer was incredibly basic & at times cheap tasting with a combination of basic vegetable adjuncts & grain dominating for long parts of this one; there was at least some citrus & the odd biscuit malt but not much else really. Some subtle sweetness rounded this one off but I can't imagine it's a beer I'd ever try again.

In the aroma is an earthy graininess, along with some light peach and grape. Pours a frothy, bubbly white head with a clear, bright golden body. The flavor is mildly spicy and herbal with soft, cereal-like malt; a stalky bitterness lingers through to the finish. The body is fairly light with considerable carbonation and a light crispness; a slight chalky texture lingers.

The overall impression is one of grainy sweetness with a persistent sour and bitter fruitiness. The latter quality mitigates somewhat over time but still keeps this one from being especially enjoyable.

A golden color with a fading white head.

Smell is a bit grainy and has notes of vegetables. Still most smell is from pilsner malt. A light husky and grainy smell.

Taste is mostly a pilsner malty base. Hints of grain and a very little husk. Bitterness is quite firm. After swallowing the bitterness kicks in and lingers. There is no real herbal or peppery hoptaste, it's very clean. Mouthfeel is right for a pilsner.
Overall the beer is decent and has a non-expected bitterness.

This is a very good pilsner, a textbook example of the style and clearly modeled after the Czech pilsners, if somewhat lacking in malt backbone.

I poured this from the can into a glass, and my first thought was "it's pretty pale..." The head was good but not long lasting, which isn't a good sign either... Then I took at sip.

I have not even been drinking much beer in Japan because most of it is frankly terrible and the price is high, but as soon as I tasted this I thought "Now THIS is a real beer!" The taste is reminiscent of Pilsner Urquell, while the body is somewhat weak the noble hops come right up and say "hello". If anything it could be faulted for being too close to the textbook pilsner style. On the other hand, it's clearly a pilsner, the hops are perfect, it's smooth and easy to drink. Basically, it's exactly what it should be. Right now, that's exactly what I want.

If you don't like the classic pilsners, don't drink this, but if you are in Japan and you want a pilsner that really tastes like a pilsner, get this. I could drink this all day (if I had the money in this land of expensive beer), especially during hot summer days. I wouldn't go looking for this beer overseas, but if you're in Japan and you want a beer that tastes like beer, I would recommend Echigo Pilsner.

Pours a pale straw colour with white head. Quite good when poured but sinks quickly, all bubbly and foamy with slow bead. No lace. Very dull, standard looking lager.

Not much on the nose. Slight metallic hop and some green apple crispness. Perhaps a slight rice character and some very light carbonation sourness. But very, very little, very unimpressive.

Immense sticky rice sweetness pervades the entire flavour. Slight thickness on the mid with predominantly sweet and sticky adjunct flavour. A mild bitterness like bamboo or other grass lingers on the back, but it's more of an aftertaste than an actual flavour sensation. Sweetness is unpleasant, what's more, almost mediciney. Not much else to mention, nothing really to recommend here.

Mouthfeel is oddly thick and syrupy considering it looks so light in body. Completely unpleasant.

Having badmouthed it enough, it does complement my Japanese teriyaki combo quite well. The sweetness still makes it a bit of a struggle, but for what it is it's not undrinkable. Just reminds me why I don't like Jap lagers.

12 oz can, thanks to Bobsy for bringing this back from Japan.

Pours a clear yellow, thin white head forms, quite fizzy, disappears pretty quick and settles to a very thin ring. Smell is sweet and corny, corn sugar, honey, grass, hay, slightly vegetal, not so good. Taste is similar, very sweet and corny, hay, grass, kind of tastes like corn flakes with sugar on them, crackery, candi like sweetness in the finish. Mouthfeel is light bodied with medium carbonation, not very good. Pretty adjuncty tasting, but could be worse. Thanks Rob!

Can brought back from Japan by Bobsy, quite the world traveler that fellow. Pours a light light golden with a little head, almost as light as a wheat beer.

Nose is promising. Some hefty caramel malts for a pils, a touch of grassiness coming through - and then a good whiff of corn. Too bad.

Taste is corn flakes and sugar with a light dash of grains thrown in. Ridiculously light with a slight veggie hop finish. Certainly not an exemplary pils.

as you can obviously see in the beer pic pictured, this comes in a cool can, nice design. i've reviewed a few others by this brewery, all out of a can, and i must comment on how many good-great beers i've had out of a can here in japan.

average pils appearance, nothing special. golden, fizzy. the head is fat and foamy, big bubbles. not a lot of retention or lacing. a little disappointing, echigo pilsner doesn't look great to me, but there is lots to smell. fits what i expect from a german pilsener, definitely a notable presence of those noble hops described in the style description. very hoppy.

the taste does not disappoint, there is a serious bitterness. i believe this beer delivers what is expected, it is close enough to what i believe the style should be. it's well balanced, and a great beer after a hot work day. i would say worth a try. for my money i'll go with kinshachi blue.

This beer comes in an impressive gold can with the Echigo drinking goat emblem on it. They advertise being the first microbrewery in Japan as well. Ingredients are malt and hops (says its 100% malt and uses Czech aromatic hops).

Besides the cool can though, this beer disappoints utterly lacking head, coming through only with the dark yellow color. Sweet, syrupy malty smell doesn't disappoint however and is the highlight of this beer for me.

The taste is pilsener, no doubt--with a real good punch of hops both in the mouth and afterwards. Mouthfeel is OK, with solid initial carbonation which quickly fades. There's also a nice well under-control roasted grain taste, which adds to rather than dominating the palate, which I've noticed in a few other try-hard Japanese "premium" offerings.

Well-balanced beer. This is a good pilsener!

Sampled on tap at Popeye in Tokyo.

This pilsner poured a clear, straw color with creamy, tall, slightly off-white foam that did not leave lace. The smell was very faint, but some malt aroma could be detected. The taste was a slightly sweet, malty taste with hints of hops. There was almost a honey-like flavor with some hops in the finish. The mouthfeel was smooth and clean with medium-light body and moderate carbonation. This was a decent pilsner with a bit of an unorthodox flavor.