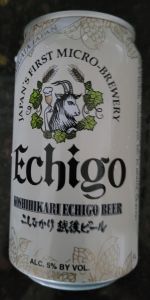 Notes: Koshihikari Echigo Beer is a rice lager beer that uses a super-premium short grain rice called Koshihikari. Produced in the ideal rice growing region of Niigata Prefecture, Koshihikari is known to be the best quality rice in Japan. The flavor of this premium beer can only be made with this rice.
View: Beers | Place Reviews
Reviews: 111 | Ratings: 236 | Log in to view all ratings and sort
Reviews by TheLongBeachBum:

Presentation: Half Liter bottle, though this 500ml bottle has a rather unique profile I find with its curved shoulder and neck. Sealed with a black crown cap which had a gold design and text on it. Main label has a water color scene of Paddy Fields and lots of Japanese text all over it. Thankfully the back label has some English text and describes this as from Echigo Beer Company and lists it as Koshihikari Echigo Beer. No strength or freshness though.


Appearance: Pale straw body exhibits serious well-water clarity. Head is bone white and whilst it rises with a puffy start it soon settles down to a thinner covering, but it never breaks.

Nose: Tends to come off as a rice-laden light lager, which I guess it is in a way. Occasionally I detected some acidic lemon bitterness but it was very feint, too feint to register as a permanent contribution.

Taste: Grain and some musty hops, thin body reveals a tendency to be acidic at times. Finish is reasonably clean, but the centre is uneventful. Hard to add much more about this brew except for the fact that it tends to a very neutral brew, it doesnt add a lot to experience but never takes anything away from it.

Mouthfeel: Middling feel, light texture with an airy carbonation lends a very lagery feel to this offering. Sadly it gets thinner as you work your way through this brew.

Drinkability: Easy going, it has nothing to prevent you enjoying say two bottles of this, but neither does it have anything that warrants picking up a case of them.

Overall: Nothing outstanding or vaguely interesting and it suffers from some of the worst aspects of the American Macro lager. A reasonably clean drinking brew that doesnt take much effort, which is suited to a warm sunny September afternoon in Long Beach.

11.8oz can poured into 12oz tulip. Poured a clean, clear bright yellow color with just a thin cap of white head that almost instantly dissipated, and left no lacing.

The aroma had some light grain scent, and a bit of a yeasty tang. Same on the tongue, grain and yeast, with maybe a slight bit of floral hops. The body was light and crisp, with a semi-sweet finish. Drinkability was fine, for what the beer is.

Overall, a solid enough "Industrial Lager". Worth grabbing if you want a different lawnmower beer, or, like me, going for the style tick.

A: Bright golden yellow color with fizzy white head that settled into a light halo around the rim.

S: Really no scent that I can pick up.

D: There really is no reason to drink this unless you're japanese.

Out of a bottle at Oshima in Orange, CA (as the main man Mack's down sushi).

Beautiful label that has Raul intrigued like his prom date - but when the dress comes off, will Raul be letdown again?

Not an all out banger, but like Shakira, these hips don't lie. Just clean and a bit crisp - no adjunct skunk.

Good while macking down some cherry salmon, but not much else.

A: clear, light, apple-flesh gold... throws up a quiet, somewhat compact, cottony foam that actually takes a couple minutes to slowly recede - ends up leaving just a weak collar on the perimeter... any lace immediately dissolves back into the liquid

S: bit of a granola and dried apple aroma... not vibrantly fruity, or vibrant in the least

T: mild maltiness similar to a dry Helles (but more like an adjunct lager)... bit of a old powdery bubblegum and a hint of clove in the aftertaste... fairly clean, crisp malt flavors... hop flavor and bitterness quite minimal

M: soft, smooth, and round... rather light-bodied with a finish that just drops off quickly yet delicately... anemic carbonation - not flat, but lacking pep

O: bottle likely had 6+ months age on it, at least... still, it was pleasant and drinkable enough for what it is - great brewing and packaging practices, no doubt

S: Reminds me of the smell of sake with a touch of hops

T: Refreshingly light, and dry hint of rice and maybe a little lemon

D: Nice beer to drink with sushi and I can see myself drinking it again.

Another from Uwajimaya in Seattle. Appearance is a light golden color with a crisp head that keeps a thin film on top when dissapated. Smells is not typical of a macro lager, it's slightly sweeter with rice and grain that is cleaner. Taste is somewhat saline with hint of rice and a good cabonation that dances on the tongue finishing clean with a light mouthfeel. Nothing to dramatic here, just a good one to try.

I find this beer to be a very nice drinking beer. It's flavors are clean and very late and represent the style very well

500 mL bottle. Straw color with a white fizzy head. Lots of bubble columns but no retention or lacing.

Aroma is mostly adjuncts with a touch of hops and a touch of fruitiness.

Taste is pilsener-esque with a noticeable riciness. Adjunct sweetish malt with a little herbal hoppiness but not much.

Mouthfeel is delicate if not thin. Highly effervescent. Really clean on the palate but that's just a result of the lack of flavor. Drinkable but not that enjoyable.

Poured from a 500 ml bottle into a pint glass.

A: Pours a clear golden color.

S: Clean with some sweet malt.

T: Your standard rice lager but much too sweet. Some harsh grain as well. Hops are barely there.

D: Not a very good rice lager, way too sweet.

Hmmm... methinks that some of the reviews might just be people venting about their dislike for the style. I for one am not a fan of Japanese rice lagers, but what can you do? I have to be fair and appreciate them or their style, right? And I have to have SOMETHING to wash down the sushi when a restaurant fails to have a good nigori sake on their menu.

Let's get to the nitty gritty&gt;

Appearance&gt;yellow, huge bubbles, no head, clear very lively. Pretty average for it's style though usually there is a bit more head and lacing.

Taste&gt; super grainy, like a bowl of cereal or hippie bread. not complex. Crisp refreshing. Perfect for it's style

Mouf- a little too carbonated.

Reviewing per the standards of the style:

Poured from a 500mL bottle into my Dogfish Head shaped pint glass (should have used my generic pilsner glass). Attractive label, which unfortunately belies the drab beverage within.

Aroma is typical adjunct sourness with low malt and hops.

Fairly high carbonation, light bodied though not quite watery.

Best used as a palate cleanser between sushi courses.

Not really worth the price increase over Sapporo, Kirin, Asahi, Orion, etc.

a: froths up with very white head that fades to near nothingness on top of a pale straw body.

s: i am really not getting anything here; a teeny bit of grain

d: i feel that there are other mainstream japanese beers that are much more enjoyable than this one.

500ml bottle, not so surprisingly available at many places throughout Hawaii, given the preponderance of Japanese tourists here. The Kanji characters on the label are quite different from the can pictured in this entry.

This beer pours a crystal clear, pale golden yellow colour, with one skinny finger of thinly foamy bone-white head, which leaves very little discernible lace around the glass as it logically bleeds away in barely more than an instant.

It smells of rice grain adjuncts, a bit warm, with mild grassy hop undertones. The taste is a little more generically grainy, but with a still healthy (?) rice husk character, some slight, and indistinct warming, and very subtle grassy/leafy hops.

The bubbles are pretty average, i.e. not noticeably different from its very numerous peers, the body a medium-light weight, its only claim coming from a somewhat tacky, pithy character, one which does no favours to the unfairly burdened smoothness. It finishes rather blandly, a combination of semi-sweet rice pudding, and subtle earthy, weedy hops.

Not really all that bad; however, this offers nothing beyond the underwhelming norm - soul-sucking, quasi-sickly grain, with crispness an ironically foreign concept, and overall just another lost chance at cross-culture beer knowledge enhancement. Or maybe I just need to track down some sushi.

Pours a bright and clear straw yellow color with a finger and a half of whitish head. The head quickly disappeared leaving slight lacing. Aroma is floral with a rice-like quality.

Taste is somewhat malty and has noticeable rice character. The rice is mostly subtle and creates a softly pleasant flavor. Slight herbal hop presence in the finish. Feel is light-medium bodied and grainy with plenty of carbonation. Very crisp, clean, and dry finish. Drinkability is very good - it's very refreshing. The flavor and feel are both very good.

This one pours a clear pale yellow color, with a small head, and lots of lacing.

This smells like crisp and clean malt, floral hops, and maybe a touch of lemon.

This is surprisingly solid, with a really crisp dryness to it. There’s crackery malt, and a nice light floral hop character. It’s not mind-blowingly flavorful, but it’s certainly well done.

This is really crisp and really drinkable. It’s just well brewed all around.

I don’t really have this style often, but it seems to be well done.