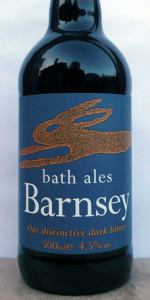 Notes:
View: Beers
Reviews: 21 | Ratings: 46 | Log in to view all ratings and sort
Reviews by fullsweep:

500 mL brown bottle poured into a pint glass. This is marketed as a "dark bitter." Not sure what that means, but it tastes and smells very much like an English brown ale or a dark mild.

I must say from the presentation/packaging to the beer itself, I really enjoyed this!

A: brown beer with 1-finger foamy head on top, left a fair amount of lacing. Beer was moderately clear with a bit of cloudiness.

T: one of the better beers I've tried of late. Although labeled a "dark bitter," the taste is very similar to a dark mild or a brown ale. Very rich and appealing.

D: exceptional drinkability--goes down easy, even after sitting for a while.

A 500ml bottle with a BB of Feb 2012. Described on the label as a dark bitter. I like the brewery's hare emblem.

Poured into a Sam Smith's pint glass. A dark ruby-brown with medium carbonation. Forms a small head of white foam that disappears almost immediately. Aroma possesses an overwhelming note of diacetyl; beneath this lies dark, fruity malt with hints of molasses, dried fruit, chocolate and vanilla.

Tastes of sweet, fruity malt with a dry, bitter finish. A whiff of diacetyl upfront, followed by notes of dried fruit, molasses and vanilla. A stewed hop bitterness upon swallowing. Mouthfeel is smooth and full-bodied, with tingly carbonation and an astringency that leaves the palate dry. Aftertaste of fruity, bitter malt.

Pretty good, but spoiled by the pervasive buttery aroma of diacetyl. The flavour is fruity and slightly sweet, with good balance. I would probably score this higher if the diacetyl note were absent, but it stands out to a degree that can't be overlooked. Certainly worth trying, but see if you can find it on cask....

Not a very strong smell - malty.

Overall a decent enough pint for drinking with a meal, avoid if you're seeking a bit flavoursome beer though.

Poured into a curvy tulip glass making a rich conker brown body with a waif like white head.

The nose is treated to a malty aroma with just subtle hints of hoppyiness that are a little elusive.

The dark brooding bitter looks very appealing to the eye, the nose has been flirted with and the taste continues to treat.

A well rounded taste hits the mouth starting with an almost buttery slightly sweet shortbread taste turning to a malty, fruity main taste and finished with a slight bitter kick.

Dark for a bitter, but the flavor is right in the zone.Pours reddish/brown with creamy head, and nice coffee bitterness. Mouthfeel is just right, not watery. Listed on the label as a dark bitter, this is very pleasant....

Look: Deep brown with ruby red highlights and no sign of haze or sediment. Fingers-width of tan/khaki head which gives way to a ring around the inside of the glass and a small amount of surface foam.

Smell: Plenty of malt, as you'd expect from an English bitter, along with some dark fruit notes as well. The bottle blurb mentions 'hints of chocolate' but there's nothing like that evident in the smell, at least initially.

Taste: There is a definite hint of dark chocolate in the taste, though, along with stewed, dark fruits. The whole thing tastes a bit like fruit cake with a hint of hops. There's plenty of maltiness - the grain bill mentions Maris Otter, Chocolate and Crystal malts and the only hop mentioned is Bramling Cross. Even so, this is as probably as 'traditional' as a bitter as you'll find.

Feel: A bit lifeless - there's very little in the way of carbonation although it'd be unfair to describe it as completely flat. Even so, it's quite tasty and very drinkable and given the malt-forward nature the carbonation, or lack thereof, isn't really a dealbreaker.

Overall: Not bad, not bad at all - it's a bitter in the 'English' sense rather than the 'IPA' sense so if you're looking for a hop bomb then you're most definitely in the wrong place. However, if you're fancying a good, old-fashioned bitter then you can't go far wrong with this, but if you're after something with a stupendously complex flavour profile you're better off looking elsewhere.

Very malty for a self described bitter, feels closer to a brown, but with a lot of hop bitterness. I prefer hoppy beers, but this is pleasant for a change.