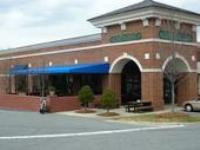 View: Place Reviews
Reviews: 49 | Ratings: 73 | Log in to view all ratings and sort
Reviews by CBlack85:

Situated on the corner of a strip mall, this place is fairly easy to find.

The atmoshpere is that of a fairly traditional pub. Lots of dark wood lines the walls and the place is covered in saucers, some merely decorative and others representing those in the "UFO Club". There is an area for live music, and a couple of dart boards, I did not wander around or to take in the entire place, but I was told that there is an area with billiard tables as well. Really, it's a nice change from some of the Charlotte area drinking establishments that lack character and are littered with TV's...

The service was terrific. The waitresses are wearing school girl outfits, complete with tiny little plaid skirts, knee high argyle socks, and skin tight tank tops. Somewhat similar to the outfits worn by the Tilted Kilt girls. Quite appealing. Aside from thier appearance the wait staff seem to have at least a rudimentary knowledge of the beers on thier list.

The beer selection was outstanding, somewhere around 100 taps, and at least as many bottles covering a wide array of styles. If only they planned thier food menu as well.

The food was uninspired, and fairly plain. Fairly standard chain pub fare, and not terribly well executed at that. Not that the food was bad, just not terrific. And definately not worth the prices.

They do have some specials, I think they have a couple of days a week where drafts are $3, but overall I found the beer and food pricing to be a bit high.

Overall, I would definately go back. The atmosphere and the extensive draft list are alluring, even if the food is not.

First off I have to tell you that this was the place that started it all for me. I had my first ever craft brew here and it changed my life. I had a copper amber ale from the olde mecklenburg brewery.
Walking up to it the vibe was very cheerful and homey. A man sat outside with a friendly giant of a dog and the place looked very inviting. Walking in you step onto a hardwood floor and see the wooden bar and tables/chairs. There is more than enough room for a large crowd and plenty of comfy booths. Darts and other games can be played there too. The service is usually pretty quick but when it's at it's peak hours it can be a little before you get your next brew or pick up the check. The selection is phenomenal. Over 200 beers available from around the world to right down the street. I love this place and can't wait to go again!

I love the vibe of this place. The plates, the decor, the live band playing in the corner, it's all a very cool place to just chill for a few hours and have some of the many, many beers they have on tap. One of the few places where the tap selection is better than the food selection. That is the one downer, the food is so-so at best, average selection and nothing that really stands out. But really, you don't go here for the food, you go for the beer. The major downside is that this place can get busy in a hurry and service really suffers for that. Considering how well it does you would think they would hire a few more servers to help even that out.

This place was awesome! I got to try so many new beers here from the east coast. The beer was great and so was the food. I ended up kinda drunk because of all the beers I drank. lol But it was still amazing!!!

It's wonderful to have a bar with a solid lineup of craft beer in the University area. They have a wall of taps, and a two page bottle list. Most days there's a special of one form or another. I usually go for glass night every Wednesday, but I've wanted to try beer poker on Saturdays, just haven't made it out for that yet! Prices are average for most beers not on special, but some bottles (750's and 22's in-particular) have a pretty steep mark-up. Overall, the Saucer is my go-to bar in the University area!

The food is really good, the service is good (I don't go there during crowded hours), and the beer selection is kind of a joke. about 100 taps and maybe 5 I'd like to order. You can tell they just buy a high quantity of less than par craft beer as most of their customers are new to the craft scene so they get away with it.